The 90-degree heat didn’t stop more than 100 volunteers from painting the words "Black Lives Matter" along Burlington's Main Street on Sunday. Clad in masks and armed with rollers, they spread traffic-cone-orange paint in a message for racial justice in front of courthouses and alongside city hall.

“I think it’s important to show the support and to show the allies that we have in the community,” said Adam Carnes. He and Tia Marosy brought their young son, Felix, to the event. They moved to Burlington from Brooklyn two years ago. Being Black in Vermont, Carnes said, can be isolating.

“I feel like taking [Felix] to stuff like this is really important to see that you might find your community and feel like you’re at home here,” Marosy said. “I also hope that it’s not just a show. I hope there’s actually some substance behind it.” 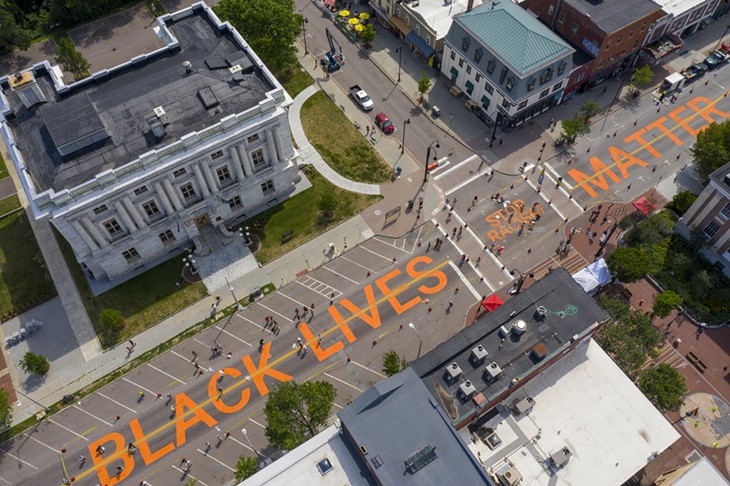 Volunteers stood in lines at the end of Church Street awaiting name tags and painting assignments that routed them to an assigned letter, already outlined on the roadway. Organizers poured paint and guided them in filling in the letters. Drummers from Jeh Kulu Dance and Drum Theater kept the mood lively.

Elijah Hines awaited his turn to paint with Piper Turosak. Hines recalled some of his own experiences as a Black man living in South Burlington. His brother, Isaiah, led a push as a student at South Burlington High School to change its mascot from the Rebels. Isaiah was harassed for his advocacy, and a South Burlington man was convicted of a misdemeanor stalking charge against him.
“We have both faced a lot of racist name-calling,” Elijah said. “There’s been a lot of shit that’s gone down, and our family hasn’t been protected in the same way that a white family most likely would have.”

But Elijah said events such as this could engage the wider community in conversations about race. “There’ve been things that have kind of made me ashamed to live in Burlington, and live in Vermont, and this is one of the things that helps to change that,” Hines said.

Turosak agreed and said art can be powerful by starting conversations and reminding people of the racial justice work still to be done in Vermont.

“I’m an art student myself, and I’ve done murals and posters, and it genuinely changes people’s minds,” Turosak said. “Public art — it’s the most impactful thing, because it’s there for everybody to see and it evokes an emotional response.”

The City of Montpelier took similar action in June. The Black Lives Matter sign painted on State Street was almost immediately defaced with dirt, oil and graffiti. A muralist for the nonprofit Arts So Wonderful, Jamie Bedard, told Seven Days that her own Black Lives Matter mural, on Burlington’s old YMCA building, was also targeted with graffiti. In both cases, the artwork was quickly restored.

Mayor Miro Weinberger, who took a turn with a roller, said that the city will take a “hardline” approach to any vandalism, prosecuting anyone who tries to deface the Main Street mural. Weinberger said he views the painting as a reminder of the city’s commitment to racial justice, which he said was solidified by the recent declaration of racism as a public health emergency.

“This is something that is symbolism of the work we’ve started together as a community and we intend to do,” Weinberger said. “I hope it’s a reminder to everyone that’s committed to that work.”
Prev
Next