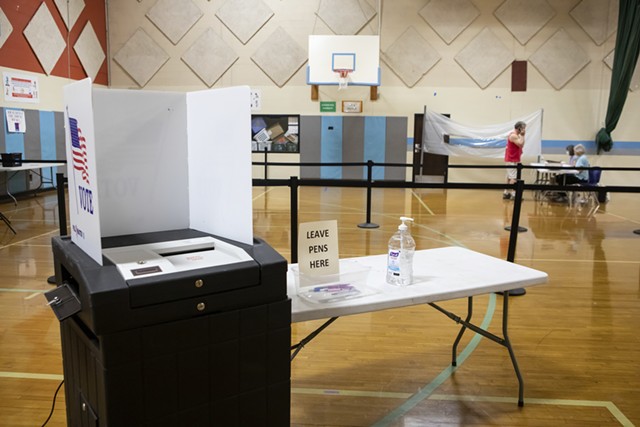 Some 25,000 Vermont voters have already requested absentee ballots for the August 11 primary election, according to the Secretary of State's Office — a nearly tenfold increase in such requests since the last state primary.

"We expect that number will continue to climb," said Secretary of State Jim Condos.

The surge is almost certainly due to concerns over in-person voting prompted by the coronavirus pandemic. But according to Condos, it's too soon to say whether the shift means more Vermonters intend to vote this year or whether a typical number will vote but will do so in a different manner.

"I'm hoping there will be an increase because it's your constitutional right to cast your ballot, and typically a primary gets a lower turnout than a general election," he said.

At an equivalent point in the 2018 election — 40 days before the primary — only 2,603 voters had requested ballots, according to Condos' office. At the same time in 2016, when there were competitive primaries for open gubernatorial and lieutenant gubernatorial positions, 4,885 voters had requested ballots. The 24,988 who had done so by the end of the day Thursday represented close to a quarter of the 107,000 Vermonters who voted in any manner during the 2018 primary.

One factor that may be contributing to the increase in ballot requests is the debate in Vermont and throughout the country over whether to move to universal mail-in voting. On Thursday, Gov. Phil Scott allowed a bill clearing the way for such a system in this November's general election to become law without his signature.

Pandemic Sparks Mail-in-Voting Plan — and a Partisan Rift
By Kevin McCallum
Politics
Scott had previously expressed misgivings about moving too quickly toward universal mail-in voting, and he argued that those on the ballot — such as Condos and himself — should not be the ones making the decision, as was required by law. The new law removes Scott from the process, allowing Condos to proceed.

In a letter to legislators explaining his decision to allow the bill to become law without his signature, Scott cited what he said was a technical problem with the legislation and said he hoped the legislature would address it upon reconvening in August. "I have said publicly if the General Assembly decided to remove me from this process, I would not stand in the way," the governor wrote.

The new law will allow Condos to mail general election ballots to every registered voter in late September, but it makes no changes to the primary election system. In an effort to clean up the state's list of voters before then, however, the Secretary of State's Office last week began sending postcards to every registered voter. In addition to confirming the accuracy of addresses in the state's database, the postcards inform voters that they may request primary ballots now — by mailing back a postage-paid card, filling out a form online or contacting their town clerk.

Those who receive an absentee ballot may mail it to their town clerk, drop it off on or before Election Day or discard it and vote in person. The Secretary of State's Office currently expects all polling locations to be open, though it is encouraging Vermonters to vote by mail in order to prevent the spread of the coronavirus at the polls.

The increase in early voting presents opportunities and challenges for candidates. For the past two decades, according to Condos, lists of those who have requested and returned ballots have been public records, allowing campaigns to obtain them in real time and contact likely voters. Every day, his office emails the names and addresses of all such requesters to more than 50 candidates, operatives and party officials.

"We are aware of who has requested ballots, and there are multiple ways we can reach out to those voters," said Cameron Russell, who is managing former education secretary Rebecca Holcombe's Democratic gubernatorial campaign.

The Vermont Democratic Party enters the data into its voter file, according to spokesperson R. Christopher Di Mezzo, giving it a better sense of who is likely to vote in the general election and, therefore, who the party should target with phone calls and mailings. The party also allows primary election candidates who pay a fee to access that data.

Former Burlington city councilor Adam Roof, a Democrat seeking to represent Chittenden County in the state Senate, said his campaign is attempting to contact every voter in the district who has requested a ballot. In addition to sending them mailings, his campaign is calling, texting and targeting them via social media.

The high volume of requests, he said, is keeping his campaign busy. "It's hard to keep up with," he said, "but we knew it was coming."
Prev
Next