by Matthew Roy and Paul Heintz 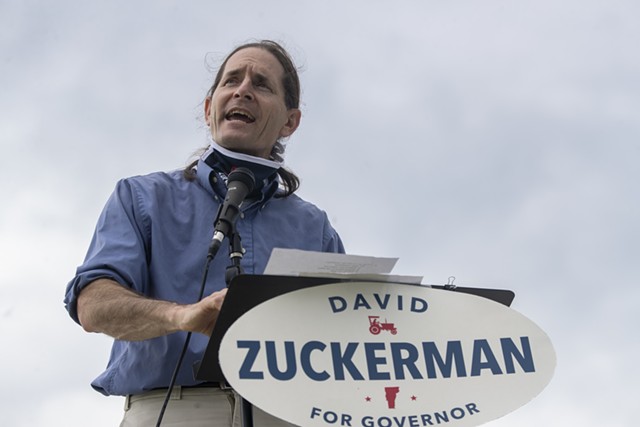 Lt. Gov. David Zuckerman raised more money in the last two and a half months than any of his rivals for the Democratic gubernatorial nomination, according to reports filed Wednesday with the Secretary of State's Office.

Zuckerman collected $130,328 in donations between March 13 and June 28 — more than the $101,276 reported by former education secretary Rebecca Holcombe.

Both candidates raised far more campaign cash than the incumbent Republican they hope to replace, Gov. Phil Scott. When he announced in May that he would seek a third term, Scott pledged to refrain from campaigning or fundraising until the coronavirus-induced state of emergency had been lifted.

The governor largely lived up to that promise, picking up a mere 30 donations worth a combined $8,155 in the most recent fundraising period. He did, however, spend $53,754 on his non-campaign — including paying just more than $50,000 to Washington, D.C.-based Optimus Consulting. That left Scott with only $49,893 remaining in his campaign account.

In a statement touting his recent fundraising success, Zuckerman noted that it had come during a period in which Vermont was largely on pandemic lockdown. “I am humbled by the outpouring of support from Vermonters during these difficult times,” the Progressive/Democrat said.

"I’m not a political insider. I didn’t start this race with a name recognition and incumbency advantage," Holcombe said in a written statement. "What I do have is an incredibly hard working team — together, we’ve earned the support of hundreds of Vermonters who are ready for a new direction in Montpelier. I’m proud of what we’ve accomplished."

Patrick Winburn, a personal injury lawyer from Bennington who is also seeking the Democratic gubernatorial nomination, injected yet more of his own cash in his campaign. Of the $88,435 he raised this period, $85,250 came from his own pocket. To date, he's given his campaign $190,677 of the $194,969 it has received.

Scott had help, however, from the Republican Governors Association. Its super PAC, called A Stronger Vermont, has raised $125,590 this cycle, including $6,503 this period, and spent $9,246 in recent months — including on Facebook ads and polling.

In the Democratic primary for lieutenant governor, political newcomer Molly Gray, an assistant attorney general, led the Democratic field with $89,134 raised this period from 432 donors. To date, she has brought in $191,547.

Scott Milne, a former Republican nominee for governor and U.S. Senate who is now running for lieutenant governor, gave his own campaign $5,000 — accounting for all but $277 of its total receipts. Meg Hansen, who is also seeking the GOP nomination, raised $3,806 this period from 28 donors and has collected $25,951 to date. A third Republican LG candidate, Dana Frank Colson, contributed $1,240 to his own campaign and picked up one other $100 donation.

Updated at 3:35 p.m. to include two additional candidates for lieutenant governor.