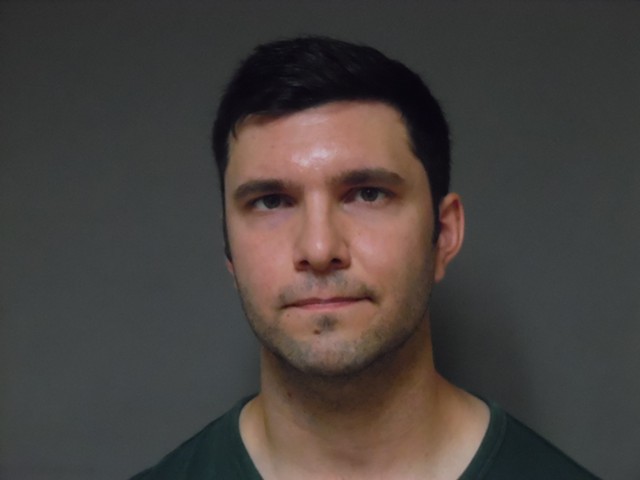 A shackled teenager "did not appear to be resisting" when former St. Albans police officer Joel Daugreilh used pepper spray on him inside a holding cell, a state police investigator concluded.

Daugreilh, 34, pleaded not guilty Tuesday to a misdemeanor count of simple assault. He was charged Monday, the result of an about-face by Vermont Attorney General T. J. Donovan, who had previously declined to bring charges for Daugreilh's November 2017 conduct.

Former St. Albans Cop Charged With Assaulting Prisoner in 2017
By Derek Brouwer
Off Message
A police affidavit filed in state court reveals new details about the mysterious case. Daugreilh resigned from the St. Albans Police Department during an internal investigation into whether he used excessive force, but the episode was not made public for more than two years. It came to light shortly after another former St. Albans cop, Sgt. Jason Lawton, was charged in September 2019 with assaulting a shackled detainee in a department holding cell.

Former St. Albans Cop Arrested for Punching Handcuffed Woman
By Colin Flanders
Off Message
When Vermont Public Radio sought records from the Daugreilh investigation, Donovan instead reopened the case, telling the news outlet in January that he'd discovered "new information." The footage has yet to be publicly released.

Multiple cameras captured the encounter between Daugreilh and 18-year-old Nathan Willey, according to a state trooper who reviewed the tape in 2017 and described the contents in a criminal affidavit.

According to the affidavit, the videos showed Daugreilh walk away from the holding cell after he and Willey had a brief conversation. Seconds later, Daugreilh hurried back because Willey had kicked the door open. He entered the cell, where Willey, who was still shackled to a bench and "did not appear to be resisting," said, "I'm not doing anything."

Willey turned away, but Daugreilh grabbed the teen's head and "forcibly" pushed it against the cell wall. "Do not kick my door," Daugreilh said, then released pepper spray into Willey's eyes.

Daugreilh did not warn Willey before using the chemical, Detective Sgt. Karl A. Gardner wrote.

Daugreilh deployed the pepper spray at such a close distance that he was also overwhelmed by the irritant. He walked to a bathroom to "decontaminate himself," Gardner wrote.

Daugreilh's public defender did not immediately respond to a request for comment. Daugreilh also could not be reached for comment.

As Controversies Mount, St. Albans Police Chief Gary Taylor to Retire
By Derek Brouwer
Off Message
In May 2018, the Attorney General's Office asked an employee at the Vermont Criminal Justice Training Council, the state government body that trains and certifies Vermont police, to evaluate whether Daugreilh used reasonable force.

According to notes from a conversation between director of administration Drew Bloom and assistant attorney general Evan Meenan, Bloom initially said that he couldn't form an opinion about whether it was reasonable. Later in the conversation, Bloom "stated it was 'reasonable' because he felt like Willey was 'active resistance.'"

Active resistance is a police term used to describe a subject's behavior.

In an interview Tuesday, Donovan said his office relied on Bloom's analysis in declining to bring charges against Daugreilh in 2018. He claimed the decision "never sat well with me," and that he thought the conduct was "pretty egregious." But Donovan didn't revisit it until preparing case records for Vermont Public Radio in December 2019.

At that time, Donovan said his staff contacted Bloom again, "who, frankly, equivocated from his original opinion." Bloom did not respond to a request for comment.

Based on Bloom's latest comments — which are not mentioned in the affidavit — Donovan said he reopened the case and solicited a second opinion. His office hired Steven Ijames, a police training and use-of-force consultant based in Missouri whom Donovan tapped in 2019 to review an altercation between Burlington Police Officer Cory Campbell and Douglas Kilburn.

Daugreilh is only the second police officer whom Donovan has charged, though he has reviewed at least 17 police shootings and use-of-force incidents since he took office in 2017, Vermont Public Radio reported earlier this year.

On Tuesday, Donovan questioned whether he'd been relying too much on use-of-force experts to guide his decision making, particularly given the public "debate" about what use-of-force standards are acceptable.

Cut the Police: The Bid to Slash Law Enforcement Funding in Vermont
By Dan Bolles, Derek Brouwer, Colin Flanders and Courtney Lamdin
Crime
"I'm not sure ... that we want to be relying on folks who are going to perhaps rely on standards we no longer think are appropriate or best practices in policing," he said.

However, Donovan said he isn't planning to revisit his earlier decisions not to charge other Vermont officers unless new information emerges in each case. Asked whether he would direct his staff to look for such information, Donovan replied that he didn't think his office has the "bandwidth or resources" to do so.

'Dark Cloud' Over St. Albans PD After Officer Charged With Rape
By Derek Brouwer
Off Message
A fourth former officer, Mark Schwartz, resigned earlier this year while also under investigation. Donovan said his office is preparing to evaluate three incidents involving Schwartz. One, involving potential excessive force, has been handed over to prosecutors for review.