In a bid to support the state’s struggling tourism industry, Vermont will significantly expand the number of states whose residents can travel here by car without quarantining.

Beginning July 1, residents of low-risk counties in seven states stretching west to Ohio and south to Virginia will no longer have to self-isolate for 14 days when visiting Vermont.

That restriction has proven devastating to local restaurants and lodging establishments, which rely heavily on an influx of tourists from around the world — particularly the Northeast and Québec — every summer.

Gov. Phil Scott noted that many of these businesses are “on the edge” and 10,000 hospitality industry workers in the state are out of work due to the restrictions in place to contain the COVID-19 pandemic.

“By welcoming people from low-risk counties, we can help support the hospitality sector and the thousands of jobs it provides Vermonters,” Scott said at a press conference on Friday.

The move to further reopen the economy comes even as states in the South and West are experiencing a spike in infection rates, particularly in Florida, Arizona and Texas, where the governor paused reopening efforts and on Friday ordered bars to close.

But Vermont officials stressed that the state’s infection rate remains one of the lowest in the nation, and it has the hospital capacity and contact tracing programs in place to manage outbreaks when they flare up.

Michael Pieciak, commissioner of the Vermont Department of Financial Regulation, noted that, unlike the South, Northeast states have seen an 18-percent drop in new cases in the past week. 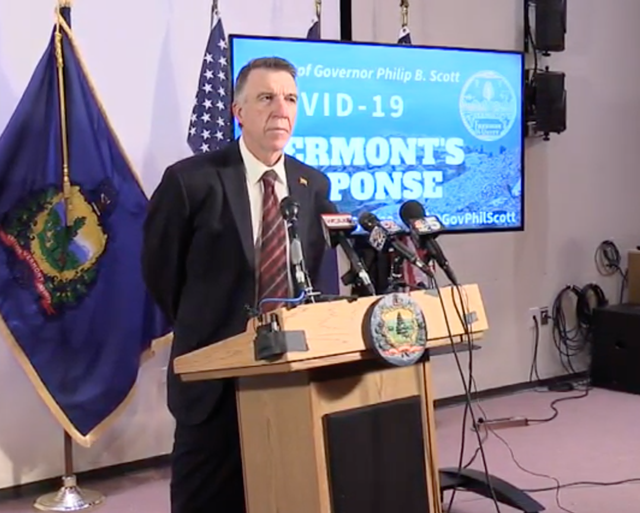 Similarly, there was a 13-percent drop in active cases within a five-hour drive of Vermont, he said.

That continued positive trend, despite recent local outbreaks, gave the state confidence that it is safe to broaden the existing program and allow travelers from low-risk counties to visit Vermont more easily.


Low-risk counties are defined as those with fewer than 400 active cases of COVID-19 per million people.

Since June 8, travelers from low-risk counties in the six New England states and New York have been able to travel by car to the state without quarantine restrictions. At that time, there were 55 counties in four states — New York, New Hampshire, Maine and Rhode Island — that met the requirement. There were no counties in Connecticut or Massachusetts considered safe enough.

Now the state will apply the same policy to seven additional states: Pennsylvania, New Jersey, Maryland, Delaware, Virginia, West Virginia and Ohio, plus Washington, D.C. Currently, 260 out of 500 counties in those states have low enough infection rates that residents can travel to Vermont under the rules.

About 19 million of the 85 million people who live in the 14 states and districts covered can now come to the state in their own cars.

“It is a significant percentage of the regional population,” Pieciak said.


Those coming by airplane and bus must still quarantine.

Immediately following a recent outbreak in Winooski, Chittenden County also fell in that category but has since dropped back below the threshold. Pieciak said Vermonters are not subject to the same rules, and the state knows more about the case situations in its own counties.

Scott said he expected the states in the program would likely remain the same for the summer, but a state with a very low infection rate might be added.

“Let’s put some perspective on this,” Scott said. “We have the fourth-lowest number of cases in the nation right now, and we have been, consistently.”

He noted that only Montana, Alaska and Hawaii had a lower total number of infections than Vermont — and Scott said he wasn't going to jeopardize that track record.

“We have a lot to be proud of and a lot to be thankful for, and we remain committed to staying in that top five,” he said.
Prev
Next