An Old North End ‘Legend’ Dies, and the Public Pays Tribute | Off Message 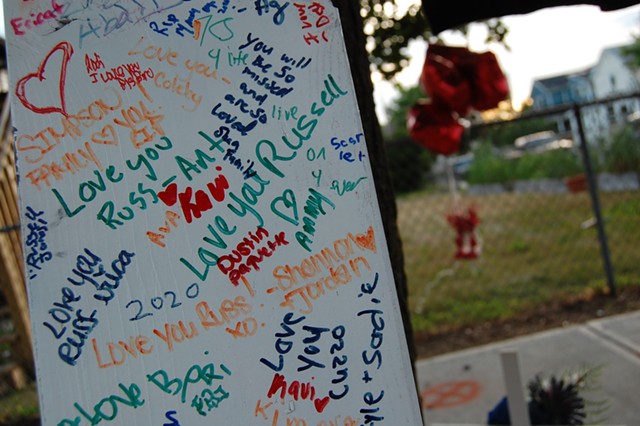 Scores of people gathered in the Old North End over several days this week to remember Russell Worthen, a 30-year-old man who died on June 16 after crashing a motorcycle into a tree in Burlington. Worthen was a member of a large, tight-knit family with deep roots in the neighborhood.

His mother, Cheryl, and her five sisters grew up in the Old North End in the 1970s and ’80s. Between them, they have 36 children and 28 grandchildren— many of whom still live in Vermont. Russell was born in Lowell, Mass., but grew up in the ONE alongside siblings Nikki and Ricky and dozens of cousins.

Several of those cousins constructed a white wooden cross on a greenbelt at Rose and Cedar streets on the day of Russell’s accident and wrote “RIP Splash Worthen.” Friends gave Russell the nickname because of his prowess at basketball, his mother said. The term refers to the motion of the net when a ball swishes without hitting the rim.

Since her son’s death, said Cheryl, “There’s literally been thousands of people showing up to pay their respects.” They’ve left behind messages, scrawled with Sharpies, on the cross. “North St. Legend,” one reads. “We love you so much Uncle Russell,” says another. 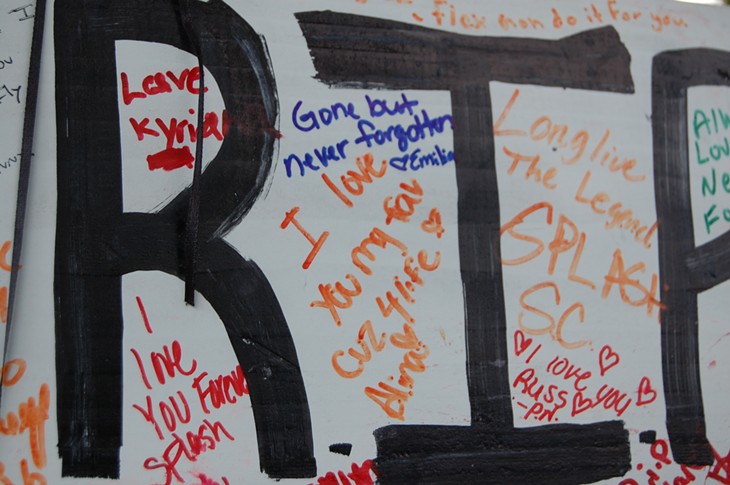 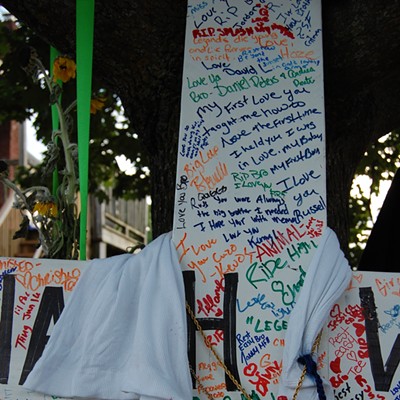 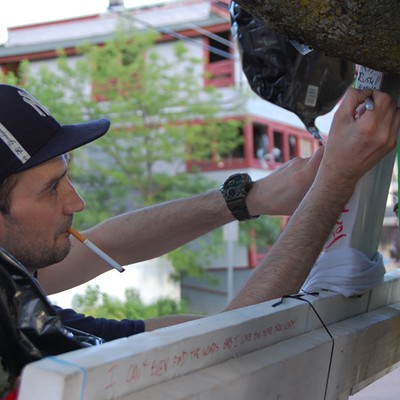 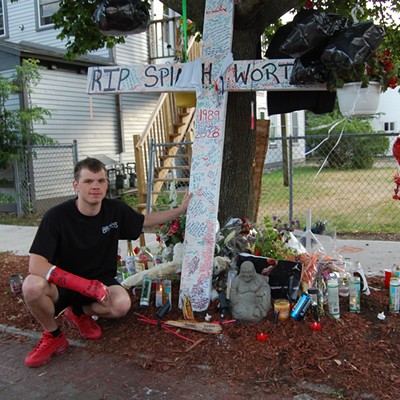 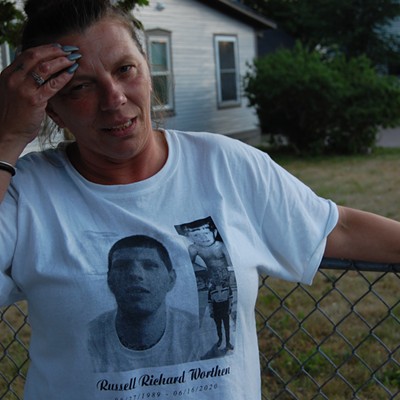 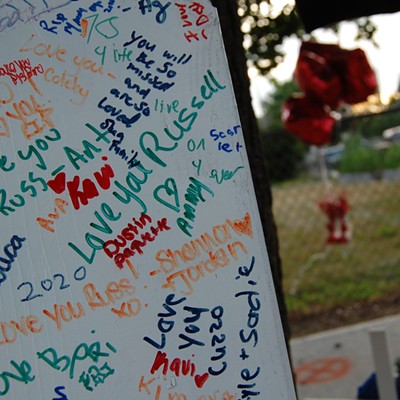 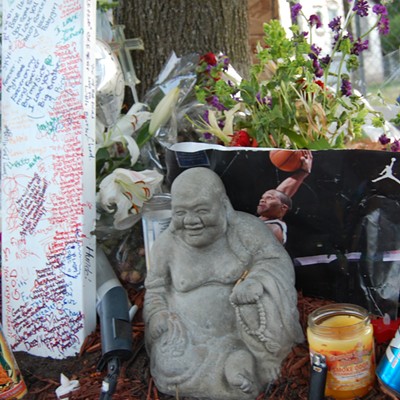 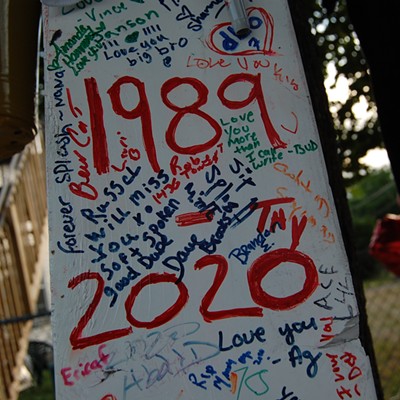 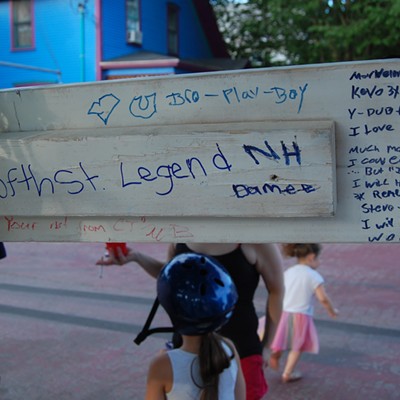 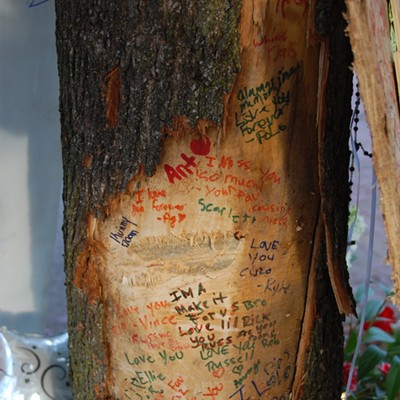 An Old North End Tribute
By Matthew Roy
Click to View 12 slides
An assortment of items have been arranged around the base of the cross: devotional candles with pictures of Mary and Jesus, a Buddha statue, a Reese’s peanut butter cup, bouquets of flowers wrapped in cellophane, and bottles of tequila and Hennessy cognac. “It feels awesome that he was so loved and so many people cared for him,” said Cheryl. “But on the other hand, it’s super overwhelming.”

Following a funeral service on Wednesday at the Cathedral of St. Joseph on Allen Street, mourners gathered outside of Cheryl’s home on Rose Street for a boisterous block party to celebrate Russell's life. Attendees played music, lit candles and released balloons. Cheryl’s sister Ruthy made 150 T-shirts with photographs of Russell as an adult and a young boy to give away. People brought macaroni and cheese, chicken wings, hamburgers, hotdogs, and potato salad to share, and the family cordoned off the street. “We fed the whole neighborhood,” said Cheryl.

Word of his death reached Vermont’s prison system, where Russell had served time; Cheryl said a corrections officer she bumped into told her people were in mourning.

Russell got in trouble with the law as a teenager and did multiple stints over the years for petty larceny, burglary and assault. After his most recent release, which was last summer, Cheryl said, he was in a good place: He got a job in construction and an apartment. In August, he met girlfriend Baylee Arnold at a bar in downtown Burlington. From the very start, they were inseparable. “We just clicked,” said Arnold.

Ricky remembered his older brother as “the funniest person I ever met” and someone who would do anything to make people laugh. He was also fearless, said Ricky. “I never saw him back down from anything, and I never saw him scared.”

Longtime family friend and neighbor Kenny Lemieux described Worthen as a protector. Years ago, after hearing about a group of guys in the neighborhood who teased and threatened Lemieux because he was gay, Worthen knocked on their door and told them he’d beat them up if they didn’t leave Lemieux alone. The teasing stopped.

Worthen was also fiercely loyal to his family. As one of the few adult Worthens with no children of his own, he would often take his cousins’ young children — who all called him Uncle Russell — overnight to give their parents a break. Among the many tattoos covering his arms and upper torso were the names of his mother, cousins, aunts and siblings.

Retired teacher Anne Tewksbury-Frye taught many of the Worthen children, including Russell, at Lawrence Barnes Elementary School on North Street, now called the Sustainability Academy at Lawrence Barnes. She described the family as “an institution” in the Old North End. Tewksbury-Frye recalled that several times on Halloween, Cheryl and her sisters came to Barnes in costumes to hand out cupcakes to all the students. “They had children in most every single room, I think,” Tewksbury-Frye said.

Russell was an inexperienced motorcyclist, said Cheryl, and had bought his bike just a few weeks before his fatal accident. While riding it outside of her house, he lost control and crashed into a tree. He died at the scene.

In the days since, friends and family have scrawled messages on the exposed wood of the tree trunk — a scar left by the impact.

“I’m a make it for us,” a comment from brother Ricky reads. “Love you Russ. See you soon.”
Prev
Next