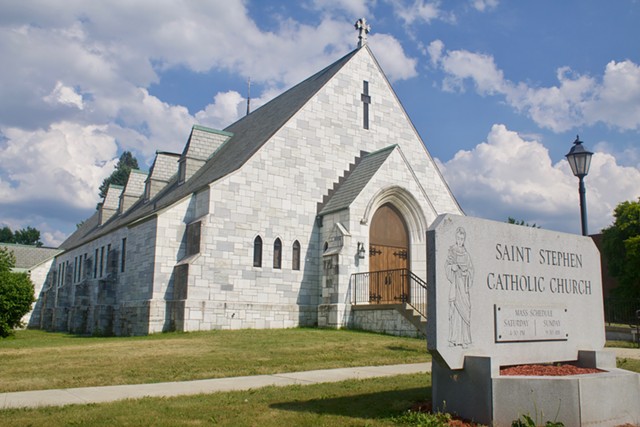 The Roman Catholic Diocese of Burlington is closing a long-running Winooski parish and two rural churches because it doesn't have enough priests to staff them.

St. Stephen Catholic Church on Barlow Street in Winooski will hold its final Sunday mass on June 28 before the parish is dissolved and its assets merged with nearby St. Francis Xavier Parish.

The Winooski closure is the first since the diocese announced a strategic plan last year that forecast future mergers. It was triggered by the departure of pastor Stephen Hornat, an Edmundite priest assigned to the parish for the last five years.

Priced for Scale: $8.5 Million Listing Could Limit Options for Burlington Cathedral
By Courtney Lamdin
Real Estate
Hornat said the Society of St. Edmund, a Catholic order headquartered at Saint Michael's College in Colchester, is also facing a priest shortage and decided to withdraw those assigned to a few area parishes.

Earlier this month, the diocese informed the St. Stephen parish that it didn't have anyone to replace Hornat.

"The decision to close the church was made because of the decline in the number of priests and the inability of the Diocese to assign a priest to serve the community, as well as the very close proximity of St. Francis Xavier Church," said John McDermott, vicar general.

The diocese has lost about 60 percent of priests since 1990, according to figures published in the most recent issue of Vermont Catholic magazine. As of July 1, it will have 57 active priests serving 68 parishes and 114 church buildings, McDermott said. Nearly one-third of active priests are over the age of 60.

Nun Left: As Burlington Convent Prepares to Close, Developers 'Drool' Over Property
By Courtney Lamdin
Development
All three churches had been closed since March because of the coronavirus pandemic, during which time the diocese streamed mass online. Churches statewide were allowed to reopen on June 1 with reduced capacity, per an order from Gov. Phil Scott.

Though barely one square mile in size, Winooski has hosted two Catholic parishes for more than a century, the result of cultural divisions between French and Irish congregants. Originally the Irish parish, St. Stephen is the smaller of the two, with about 175 registered families, Hornat said. Its congregation trended older, but was enlivened by a handful of New American families with children.

"It was a very active parish," he said. "They were very much engaged in social outreach to the Winooski community."

The swift closure has left some longtime members feeling like their community has disintegrated overnight, music director Peg Lesage said.

"In the middle of this pandemic, it seems like one more blow," she said. "We can't even say goodbye the way we would normally say goodbye."

Lesage, who has attended St. Stephen since 1987, said the prospect of trying to join a new church while social gatherings are limited and mass-goers are masked feels daunting.

"It's hard to think about starting over," she said.

There are no immediate plans for the church property. The City of Winooski leases a portion of the land from the parish for the Winooski Senior Center, Lesage said.

McDermott said the pastor at St. Francis Xavier and Bishop Christopher Coyne will hear recommendations from parish members about how to dispose of it.

Last year, the diocese placed the Cathedral of the Immaculate Conception in downtown Burlington on the market for $8.5 million. The listing is still online.

Catholic church membership in Vermont has dropped from 142,000 in 1990 to 112,000 in 2019, the diocesan magazine reported. Annual infant baptisms have dropped by 80 percent. Funerals, meanwhile, are down just 12 percent.
Prev
Next