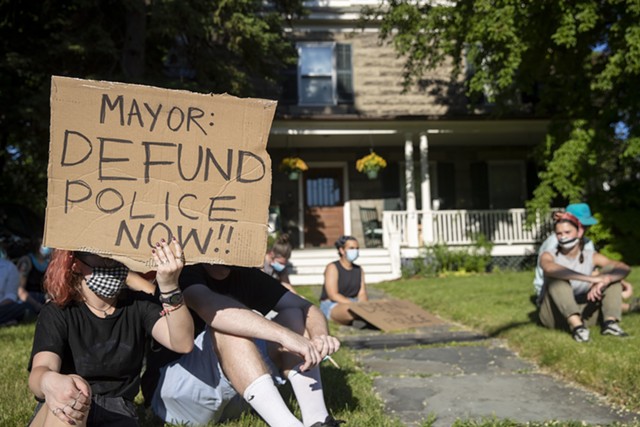 The conversation centered on demands from activists that the city cut 30 percent of its police force, remove police officers from Burlington schools and fire cops who have engaged in violent behavior. Department brass and the police union have argued that an immediate 30 percent cut would be dangerous.

"It's got to be done in a way that is intelligent and intentional," Murad said Monday night. "You can't turn off the only responsive agency without building viable alternatives."

Most councilors gave no real indication of how they'll vote on — or seek to modify — Mayor Miro Weinberger's fiscal year 2021 budget proposal, which includes trims of $1.1 million, or 6 percent, from the police budget he originally proposed. The vote is scheduled for June 29.

The mayor's plan leaves 12 officer positions vacant but otherwise keeps the department intact. Just $300,000 of the savings would be diverted to programs that promote racial justice; the remaining $800,000 is earmarked to help fill a $12 million coronavirus-related budget deficit, unless the city receives more revenue than expected.

"If we're cutting 6 percent, that money needs to be reallocated directly to communities," Councilor Perri Freeman (P-Central District) said. Freeman suggested funding programs that help people of color, the homeless or those struggling with mental illness.

Freeman was among the 100 protesters who marched to Weinberger's home last week to amplify demands from the Vermont Racial Justice Alliance, an advocacy group led by people of color. The alliance mobilized more than 1,000 people to call in to public meetings last week to push for cuts in police spending in favor of bolstering other community services.

Cut the Police: The Bid to Slash Law Enforcement Funding in Vermont
By Dan Bolles, Derek Brouwer, Colin Flanders and Courtney Lamdin
Crime
The phone-in protest was inspired by the death of George Floyd, a Black man killed by Minneapolis police last month, and by Burlington's own cases of alleged police brutality. Calls to "defund" the police have rung out across the nation.

Monday night, councilors homed in on the issue of removing police officers from Burlington schools. Weinberger kept those positions in the budget after receiving a supportive letter from school district leaders earlier this month.

Outgoing Superintendent Yaw Obeng, however, subsequently told VTDigger.org that he was never consulted on the letter, though his signature appeared at the bottom. School Board Chair Clare Wool admitted she authorized the letter without discussing it with the full board, but she said that Obeng and other signatories "collaboratively drafted" the missive.

The council discussion steered clear of that controversy and got straight to the point.

After Public Urging, Weinberger Proposes Police Budget Cuts
By Courtney Lamdin
Off Message
"I just do not think police should be a permanent fixture in schools, period," Councilor Zoraya Hightower (P-Ward 1) said. "There's so much evidence, just so much overwhelming evidence, across the country about the negative outcomes that they have."

Murad responded that most of the 11 arrests made in city schools last year involved weapons offenses and that cops wouldn't feel safe patrolling schools without being armed themselves. He said he supports the notion of the SROs collaborating with people trained in mental health and cultural competency.

Councilor Karen Paul (D-Ward 6) asked if either of the two SROs has a degree in social work or sociology. Murad said one officer has a master's in conflict resolution and mediation.

Councilor Joan Shannon (D-South District) asked if SROs have any role in disciplining students. Murad said school officials sometimes ask them to hand down punishment, "and then they very firmly say, 'That's not what we're here to do.'"

Murad also presented data that show calls for the most serious crimes in Burlington have stayed relatively level, while those for more minor issues — such as graffiti removal, parking violations and petty theft — declined by more than 30 percent from 2015 to 2019.

Councilor Brian Pine (P-Ward 3) suggested the trend demonstrates that the city could do without as many cops. But Murad said the department's "robust" and "consistent" policing has driven down those incidents over time. If patrols are reduced, crime will increase, he said.

Racial Justice Protesters March to Burlington Mayor's House
By Courtney Lamdin
Off Message
Cutting 30 percent of the roster would leave Burlington with 75 cops, down from the current 90. The union contract dictates that the newest hires would be the first to go, Murad said, displaying a PowerPoint slide with portraits and bios of the latest recruits.

"These are officers who have amazing stories, stories of real dedication to this job," he said. Murad added that many have "diverse backgrounds" and have been trained in deescalation and how to help vulnerable populations.

Pine said he was pleased to hear that Murad is open to discussing how to reform policing in Burlington.

"We may have different ways of getting there, but I think that's our shared purpose and our shared goal," he said. "Hopefully we can find a way to do this together by a week from tonight."
Prev
Next