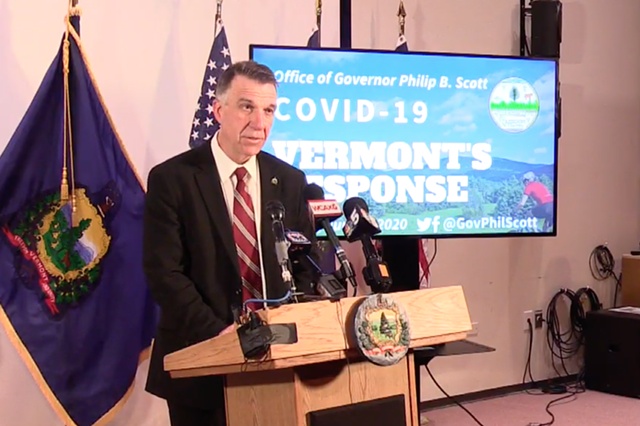 Restaurants will be able to reopen for limited indoor dining, and visitors from low-risk areas in the Northeast will be able to visit Vermont under the latest round of Gov. Phil Scott's measures to gradually reopen the state's economy.

Scott said Friday he and public health officials were confident that the modest changes were safe, despite an outbreak of COVID-19 in Winooski, where health officials reported 34 new cases on Thursday.

“The fact is, outbreaks are going to continue,” Scott said. “But that’s exact why we built up our capacity to box them in, and we can start up our economy while also keeping people safe.”

He added, “While there may — and likely will — be more cases, we expect to contain it from spreading more broadly across the city or state.”

For that reason, Scott said that beginning Monday, June 8, restaurants will be able to serve people indoors using up to 25 percent of their seating capacity. Tables must be spaced six feet away, and advance reservations will be required.

“One of the many things that Vermont is known for is local food and craft brews, so I know how important this sector is to our economy,” he said.

While bars are not included in the order because of the typical close proximity of bar seating, Scott said the dining areas of bars and breweries will be allowed to host customers.

“I know they can’t make it on 25 percent capacity, but we’ve got to start somewhere, and we’ll be able to build on this if the number moves in the right direction,” Scott said.

At the moment, however, the state’s numbers are decidedly moving in the wrong direction. The Winooski outbreak represents a significant spike in the daily number of new cases, which have been in the single digits for weeks.

The new cases "will certainly skew our data,” said Michael Pieciak, commissioner of the Vermont Department of Financial Regulation. Pieciak stressed, however, that the sharp increase would likely “smooth out over time” if, as anticipated, the outbreak is contained. He stressed that neighboring states continue to have far higher infection rates than Vermont, with Maine averaging 33 new cases per day since April 1, and New Hampshire, 69.

That made it tricky for the administration to assert that now is the time to relax restrictions on travel from neighboring states. Currently, visitors are supposed to self-quarantine for 14 days. That restriction has effectively eliminated tourism to Vermont. 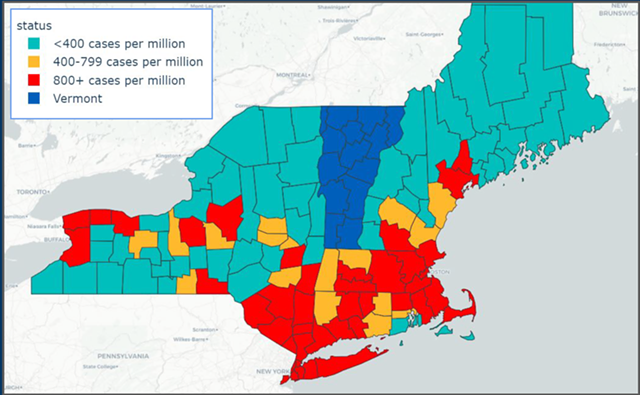 Under new rules starting Monday, tourists and nonessential business travelers from low-risk areas of New England and upstate New York will no longer have to quarantine when visiting Vermont.

Low-risk counties are defined as those with fewer than 400 active cases per million. At the moment, 55 counties in the six states fit that bill. Pieciak said the threshold was chosen because it was approximately double the highest infection rates that counties in Vermont have experienced.

The counties are home to approximately 11 percent of the population of the six states, or 3.6 million people. No visitors from Canada are anticipated because the international border remains closed to nonessential travel.

Visitors will have to come in personal vehicles without stopping along the way. And once in Vermont, they will have to check for symptoms daily using an app called SARA Alert. The state has no way to check whether tourists are coming into the state from the approved counties, Scott acknowledged.

That burden will fall largely on the lodging industry, which will have to “keep an eye on who’s coming in” when they register, Secretary of Commerce Lindsay Kurrle said. Visitors will have to certify that they either met the 14-day quarantine or are coming from a county on the low-risk list, she said.

“Opening up to counties around our state and inviting folks here is going to require a little bit of trust and a lot of education,” Kurrle said.

She acknowledged that it was "not a perfect system" to rely on people's word but added, "We do trust that the lodging owners don’t want an outbreak any more than anybody does."
Prev
Next