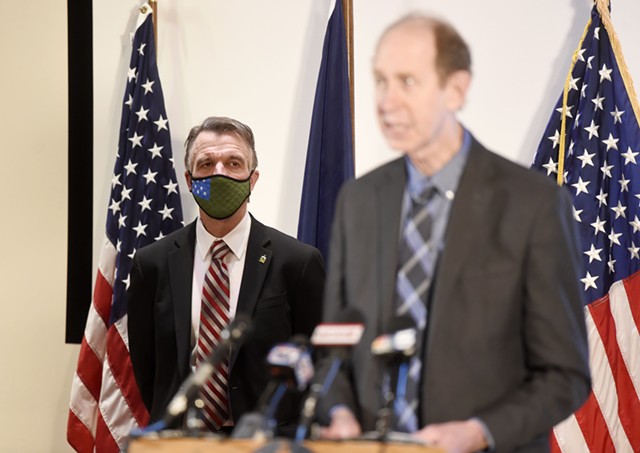 Editor's note: The state reported on Thursday morning 36 new cases of coronavirus, 34 of which were in Chittenden County.

Gov. Phil Scott expects to announce more major steps to reopen Vermont's economy on Friday despite a new coronavirus outbreak in the state's most populous county.

Scott teased his upcoming moves during a press briefing Wednesday. He said he hopes to lift indoor restaurant dining restrictions and make it easier for people to travel to Vermont from out of state.

Health Commissioner Mark Levine followed up Scott's comments with news that increased testing in Winooski has revealed approximately 10 to 20 new cases on top of the seven cases identified in that city last week. Levine said the state's epidemiology team is still validating the results of the 200 tests performed Monday and Tuesday and expects to have firmer figures later this week.

"While Vermonters have done much to flatten the curve, these cases illustrate the fact that the virus is still active in our state, as it is around the country," Levine said.

Officials have warned for weeks that the reopening of Vermont businesses will inevitably result in additional coronavirus cases. Scott reiterated that message Wednesday, calling the Winooski outbreak “concerning, but not unexpected.” He stressed that the state’s overall rate of infection remains low despite the new cases and said he would be more worried if the outbreak were not isolated to a single area.

"We're going to start seeing more cases. We're going to see some outbreaks," Scott said. "But the trick is to find them and surround them, so that we can mitigate them."

Officials have provided scant details about the initial cluster of cases in Winooski beyond confirming that they are not located in a group living facility.
The outbreak prompted the health department to offer free testing for all city residents this week.

The health department will now investigate the movements of the newly infected patients and contact anyone else who could have been infected, Levine said. He added that continued testing this week will likely lead to more cases in Winooski.
"But with contact tracing, coordination with the community, careful isolation and quarantine, this outbreak can and will be managed," Levine said.

Scott said he plans to announce his latest turns of the "spigot" on Friday, as long as the outbreak remains contained to the Winooski area. He said the return of indoor dining at restaurants will be "very controlled," with an emphasis on physical distancing; bars will not be allowed to reopen at this time.

Scott said he is also looking at how to safely allow lodging and campground operations to accept more visitors, and his team continues working on a plan that would let some people avoid quarantine, depending on where in the country they come from.

"This is an area where I know we're currently not allowing enough to sustain this important sector of the economy," Scott said. "But nothing about this virus is ideal, and we're doing all we can to open up as much as we possibly can — as safely as we can."
Prev
Next