In Vermont, the Ventilators Never Arrived | Off Message

In Vermont, the Ventilators Never Arrived 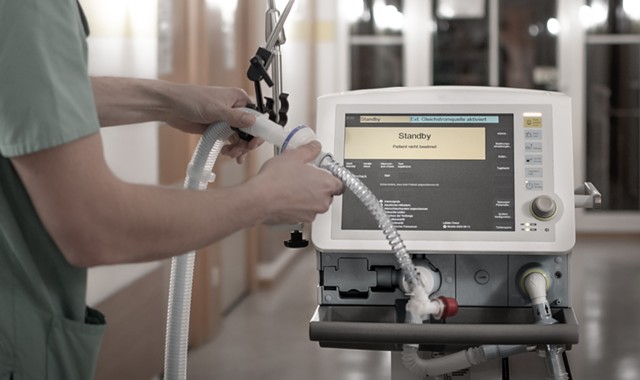 In late March, as Vermont's coronavirus infection rate was doubling every five days, state officials projected they might need as many as 565 ventilators to treat an expected surge of COVID-19 patients.

They scrambled to add to an existing collection of 177 critical care ventilators and 69 other units spread throughout the state's health care system, according to Public Safety Commissioner Mike Schirling. Even Gov. Phil Scott got in on the action, cold-calling contacts within the industry to implore them to help obtain the machines. At one point, Schirling said, the state had ordered as many as 450 — at a cost of roughly $5 million.

To date, only 10 have arrived.

"Because the rest of the world faced the crisis before we did, there was buying going on before the U.S. was even in the game," Schirling said. "So we were lucky to be able to get orders in."

In some cases, the state pared back its requests because its need for ventilators decreased. In others, it canceled orders because anticipated shipping dates were too far in the future. And in one case, according to Schirling, the federal government used the Defense Production Act to swoop in and claim 200 units Vermont had ordered from Philips.

At present, the state still has 95 critical care ventilators on order from four companies, according to a document provided by the Department of Public Safety. Those units, plus the 10 already delivered, are expected to cost the state more than $2.4 million.

The state has also contracted with two homegrown outfits that only recently began manufacturing ventilator-like devices. Officials ordered hundreds of AutoVENTs from Beta Technologies, the South Burlington-based electric aircraft developer, and hundreds of Vermontilators from the University of Vermont, according to the DPS document. Those would be used as emergency backups, Schirling said. (The Vermont National Guard also has access to 12 conventional ventilators, he said.)

The state's procurement problems have not posed any risk to public safety, according to officials. "We don't need them at the moment," Secretary of Human Services Mike Smith said. "We have not come near our ventilator capacity at all."

Even at the height of Vermont's coronavirus outbreak, according to Commissioner of Financial Regulation Mike Pieciak, only 10 to 20 people required the use of a ventilator at any given time. "We were fortunate, unlike some other places, that we weren't really pushed to our capacity — at least from a ventilator standpoint," he said, adding that the state had been more concerned about a shortage of intensive care unit beds.

Pieciak, who has led the state's coronavirus modeling efforts, said he's optimistic that Vermont will be ready even if there's a surge in cases. "Generally, we have confidence that we'll have enough ventilators for a second wave," he said.

Neal Goswami, a spokesperson for the University of Vermont Health Network, said his organization is "more than prepared to take care of the anticipated volume" of cases and has the capacity to scale up as needed. The network has been working closely with the state on procurement of ventilators and personal protective equipment.

"COVID-19 has reinforced the need to be fully prepared for all possible situations," Goswami said. "We are continuing to acquire the supplies necessary to help our patients during this pandemic and beyond."

According to Schirling, the state was careful to order only from reputable companies. "There were many offers for ventilators we opted not to purchase because they didn't pass muster clinically or, in some cases, folks were asking inordinate amounts of money for them," he said.

The commissioner said he was not at all concerned that the remaining 95 might show up after the threat has passed. "We would be happy if all of them arrived and we spent $3 million on ventilators and had them in reserve," he said.
Prev
Next