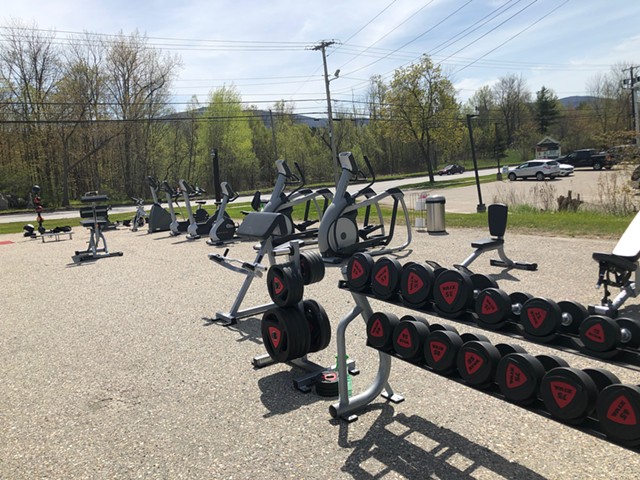 The owner of Club Fitness of Vermont has moved his Rutland gym outside to sidestep a court order that his business remain closed.

Sean Manovill said he wheeled cardio machines and free weights into the parking lot on Tuesday morning, arguing that a temporary restraining order handed down by a judge last week only applies to indoor activities.

"I'm definitely not in contempt of court," he said. "Absolutely not. I'm not doing anything that is wrong."

Attorney General T.J. Donovan sued Manovill last Friday following failed negotiations with the gym owner, who had opened the business in defiance of state mandates intended to slow the spread of the coronavirus.

Just hours after the lawsuit was filed, a Rutland Superior Court judge sided with the state and prohibited Club Fitness from conducting "any in-person, indoor operations" so long as Gov. Phil Scott's executive order remains in effect.


"Now, he is conducting business, not as usual hours, but says it's complicated and some people are still going in to work out," the station reported.

In an interview Tuesday with Seven Days, Manovill would not directly answer repeated questions about the days leading up to his decision to move his equipment outdoors.

"I just want to let you know through this process I'm learning you don't always want to believe what you read," he said in a text message, declining to say whether the gym was open on Sunday or Monday.

Manovill said he planned to publish a video to Facebook later this week that would "correct all the mistakes the press has made in the last week and officials." He did not specify those alleged errors, and said that Seven Days' reporting had been accurate.

Donovan doesn't appear keen to press the issue. In a statement, his office noted that the governor's executive order does allow for outdoor fitness activities "under certain health and safety conditions." A spokesperson said the office planned to send a letter to Manovill on Wednesday outlining "permissible outdoor recreation and fitness activities."

Legality aside, some other clubs said Manovill's latest move looks like an outlandish attempt to drum up business.

"Sean’s ill-advised PR campaign is an irrelevant distraction for our health club and other fitness facilities in our region," Leslie and Dan Doenges, owners of Vermont Sport & Fitness Club in Rutland, said in a statement.

Manovill insists he isn't trying to pick a fight with state officials or use his defiance of public health measures as a publicity stunt. But his decision to lug his equipment outside also served as an invitation of sorts to potential new clients. Nonmembers may use his "top of the line" equipment at no charge, he said, as long as they first sign a liability waiver.

Scott has already signaled that he plans to soon allow gyms and some other close-contact businesses to reopen. But the governor told reporters on Monday that it was unfair for one business to jump the gun.
Prev
Next