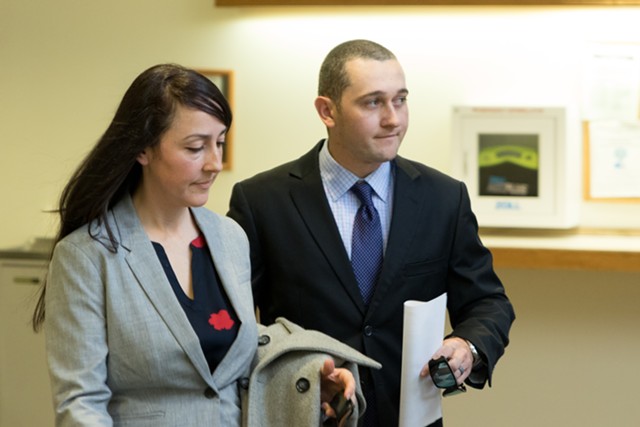 A woman who was punched by a former St. Albans police officer while handcuffed is suing the city for civil rights violations.

Amy Connelly, of Highgate, was in a holding cell at the police station on March 14, 2019, when then-sergeant Jason Lawton pushed her into a wall, then delivered an uppercut to her right eye. Two other officers, Zachary Koch and Michael Ferguson, helped Lawton restrain her on the floor.

Connelly's civil lawsuit, filed Monday in U.S. District Court of Vermont, names all three officers, Chief Gary Taylor and the city. She contends that the police department subjected her to illegal detention and excessive force, violating her constitutional and statutory rights.

The complaint also charges that the city failed to properly screen officers during its hiring process and that Taylor did not "adequately control, train, supervise and discipline police officers under his command."

‘You Guys Are Brutes!’ St. Albans Cop Punches Handcuffed Woman
By Sasha Goldstein
Off Message
Police department leaders said the incident went undetected until the American Civil Liberties Union of Vermont filed a records request two months later, though one retired officer has claimed Taylor covered it up. Lawton was fired and charged with assault last November. Taylor has said the other officers' involvement was "minimal" because they didn't see Lawton deliver the punch. Ferguson now works for the Franklin County Sheriff's Office, which cleared him of wrongdoing in the Connelly case.

Video of the officers' conduct sparked scrutiny about police culture in St. Albans that has only intensified. Two former officers face active criminal investigations into their conduct. Last month, officer Zachary Pigeon was charged with aggravated sexual assault and kidnapping. He faces up to life in prison if convicted.

A Tased Man Claims Excessive Force by St. Albans Cops
By Derek Brouwer
Crime
The department has made changes to how it reviews incidents of physical force and added new training. City officials have steadfastly defended Taylor's leadership. Earlier this year, in response to questions about an encounter involving a Taser, city manager Dominic Cloud accused Seven Days of drumming up controversy and invited the ACLU of Vermont to sue the city if it believed officers were using excessive force.

On April 23, however, Mayor Tim Smith said the city planned to convene a team to review the police department's hiring practices. The announcement came on the heels of Pigeon's arrest.

'Dark Cloud' Over St. Albans PD After Officer Charged With Rape
By Derek Brouwer
Off Message
Cloud sounded a different note Monday. "The City has worked hard to address the concerns reflected in the Connelly complaint," he said in a written statement. "Resolving the litigation is the next step in putting the matter behind us and we’re eager to do so."

Pigeon, as Seven Days reported, was initially turned down for a job at the department because of alleged conduct during a recent divorce, but was hired a year later. The County Courier reported that Pigeon had begun dating Taylor's niece during the interim, but Taylor insisted in an email to Seven Days that Pigeon's "social fraternization with my niece (whom I seldom even see) played no role whatsoever in his employment."

Within weeks of his hire, he was verbally reprimanded for using a racial slur during a conversation with Ferguson.

Similarly, Lawton had been hired by St. Albans despite a high-profile traffic ticket controversy with the Shelburne Police Department in which Lawton was found to have falsely testified. The driver sued in that case, too. It was settled for an undisclosed amount.

This post may be updated. Read the complaint below: