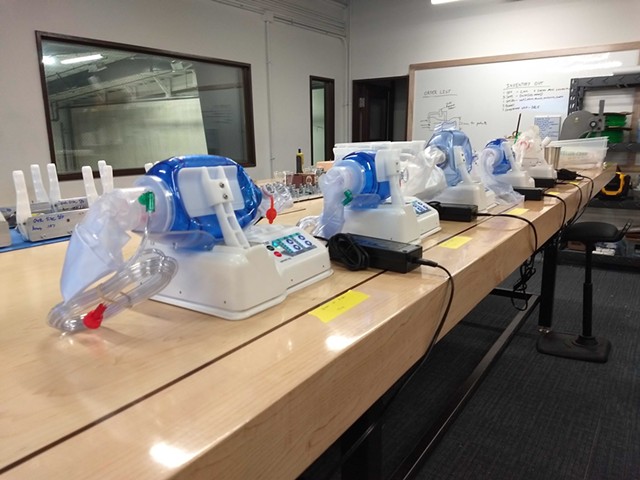 Ordinarily, when the engineers and software designers at Beta Technologies measure and design for air flow, they’re concerned with the aerodynamics of an aircraft, not whether a patient in respiratory distress is getting enough oxygen to stay alive.

But in March, as COVID-19 created a worldwide shortage of mechanical ventilators, Steve Arms, a sensor engineer with the South Burlington electric aircraft developer, decided to take on the problem. With help from company cofounder Kyle Clark, design engineer Cody Spiegel and other Beta staffers, as well as physicians at the University of Vermont Medical Center, Arms designed, built and tested an emergency ventilator in about three weeks.


The AutoVENT is designed to be small, portable, easy to use and inexpensive — about $500 to $600, compared to a typical mechanical ventilator used in an intensive care unit, which costs $40,000 to $60,000. The AutoVENT, one of several mechanical ventilators invented by Vermonters in recent months, is now undergoing emergency review by the U.S. Food and Drug Administration.

UVM Scientists, Engineers Team Up to Create 'Vermontilator'
By Courtney Lamdin
Off Message
Arms based the design on a standard bag valve mask, or Ambu bag, which emergency medical responders routinely use in the field. That device includes a mask that fits over the patient’s nose and mouth, a valve for delivering pure oxygen, and a football-size bag that is squeezed manually to push air into the patient’s lungs.

“The situation in Italy became so dire that family members were … squeezing the bags to keep people alive,” Arms said.

In the case of the AutoVENT, mechanical parts compress the bag to provide the patient with oxygen.

Founded in 2017, Beta Technologies has been developing an eVTOL, or electric vertical takeoff and landing vehicle, which could revolutionize the aviation industry. Because Beta uses scale-model airplane parts to build its drones, Arms began using Beta’s spare servos, which are used on aircrafts to move flight control surfaces such as rudders and pieces of the wing known as ailerons.

Arms had never even seen or heard of a bag valve mask before March 19, he said. In 1987, he founded what’s now LORD Sensing MicroStrain Systems, the Williston-based manufacturer of micro sensors that go into everything from suspension bridges to helicopters to heavy earthmoving machinery. (Arms sold the company in 2012.)

That said, Arms had some prior experience in the health care realm. The first micro sensors he ever built were used in medical research to measure the stress on knee ligaments damaged in sports and workplace injuries.

Within 48 hours of conceiving of the idea for the AutoVENT, Arms had a working prototype to demonstrate to physicians at UVM Medical Center. They, in turn, “poked a lot of holes” in the initial design, Arms said, adding: “I learned a lot about respiratory therapy in a short period of time.”

Those physicians included Dr. Mark Hamlin, professor of anesthesia and surgery, and medical director of respiratory care at UVM Medical Center. Hamlin’s job includes coordinating ventilator resources throughout the state to ensure that Vermont’s hospitals were equipped to handle the expected surge in respiratory patients from COVID-19.

Early in the pandemic, Hamlin said, “The initial numbers looked horrendous — 150 to 200 people at a time when we were peaking out who needed to be in the ICU on mechanical ventilators.”

Officials: VT's Virus Projections Show 'Glimmer of Hope' as Peak Approaches
By Courtney Lamdin
Off Message
Even UVM Medical Center, the state’s largest hospital, had only 65 mechanical ventilators on hand. Without locating more, Hamlin said, he was concerned that Vermont could find itself in the situation that had befallen Italy, New York City and other COVID-19 hotspots, where patients were triaged based on their age and likelihood of survival. “That’s not a place anyone wants to be in,” he said.

So Hamlin and one of his medical residents, Dr. Vivek Chittineni, began meeting with the Beta team to review the effectiveness of the AutoVENT. Though it’s one of several local ventilator designs, such as the Vermontilator, that they’ve been asked to look at and comment on, the AutoVENT appears to be the closest to production and use on patients.

“It’s been totally fascinating,” said Hamlin, who had never previously partnered with private industry to develop a new medical device. “For them to [build] something for under 500 bucks is truly astounding.”

Hamlin and Chittineni have since been invited to serve on the board of the AutoVENT Foundation, a nonprofit organization Arms set up to get the device manufactured and into the hands of health care workers as quickly as possible.

Arms and Beta staffers are now working on a preproduction run of 50 AutoVENT devices, with the goal of filling an order from the State of Vermont for 500. Upon FDA approval, those units will be delivered to the UVM Medical Center. “Then it’s time to think about scaling this up … and addressing the global pandemic,” Arms said.

As Hamlin explained, the state has fared much better than initially predicted two months ago because Vermonters stayed home and practiced social distancing. Nevertheless, once the economy restarts and people go back to work and school, Hamlin said he expects to see future spikes in coronavirus cases.

“I don’t think this is the end of COVID,” Hamlin said. “I am feeling very optimistic, however, that we won’t get to a situation where we’re so resource limited that we’ll be telling families, ‘I’m sorry, your grandfather is over this age so he won’t be getting a ventilator.'”

Arms shares the goal of not letting Vermont fall short of mechanical breathing devices. One vision he’s had is to make the AutoVENT’s design specs and software open source rather than proprietary, so that medical device manufacturers around the world can just “take it and run with it.”

Another possibility, he suggested, is to partner with Vermont companies that normally do injection molding, and with machine shops that can build the metal parts at low cost, and “kit them up.” Then, equipment companies, hospitals and public health organizations around the world could simply order AutoVENT kits online and assemble them in their own countries.

“I have no interest in making money in this endeavor,” Arms said. “It’s all about doing something that’s important and needs to get done.”
✖ i
Prev
Next