Castleton University President Announces She Will Resign | Off Message 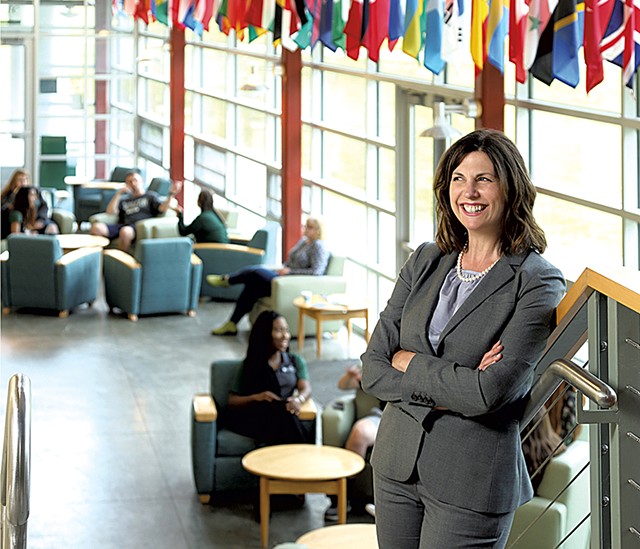 Karen Scolforo said she plans to step down May 31 after three years with the university. She recently told Seven Days that she was effectively "out of a job" as chancellor Jeb Spaulding prepared to replace her as part of his campus closure proposal.

"The circumstances that have occurred over the past couple of weeks have put me in a position where I feel that I can't lead at the same level," Scolforo said during Wednesday night's board of trustees meeting. "I don't want folks to be distracted by trying to understand some of the decisions that have been made."

"We don't have time for the distractions, and I have every faith in this team," she continued. "And I'm really disappointed because I had made a commitment to stay at Castleton for a long time."

Scolforo said she initially planned to announce her decision to the university community Thursday morning. But after a two-and-a-half-hour executive session that included Scolforo, Spaulding and the system's other presidents, trustees chair J. Churchill Hindes broke the news on her behalf, saying that he believed the meeting could be her last.

After Public Crisis, Vermont State Colleges System Charts a Difficult Course
By Colin Flanders
Education
"So I guess with that, I should probably share my decision, because I have not shared it yet with anyone," Scolforo said.

She went on to speak fondly of her tenure at Castleton, calling her staff the "most dedicated team of professionals" she has ever worked with. She urged her colleagues to keep their focus on students despite the challenges facing the system and said she has no doubt the university will succeed without her.

"I have full confidence that our team will continue to move the university forward, and to ensure that our Spartans enjoy the legacy for decades to come," she said, speaking through tears. "Because this is the Castleton way."

News of Scolforo's expected departure arrived on a night that was originally billed as a farewell to Spaulding, who announced Tuesday that he planned to resign after five years with the college system.

Spaulding's decision came a week after he withdrew a plan to close three of the system's five campuses in the face of mounting losses from the coronavirus pandemic. The plan was met with widespread furor, cost Spaulding the confidence of his faculty and provoked calls for him to step down.

The board accepted Spaulding's resignation and appointed the system's general counsel, Sophie Zdatny, to serve in his stead. The board plans to search for a longer-term interim chancellor in the weeks ahead.

Spaulding said at Wednesday night's meeting that he still believes his proposal was the "best available path." But he said he has recognized the way he rolled out the plan hurt many people — Scolforo included — and he believes that he could no longer be a "welcome messenger" for the state colleges.

"Clearly the process leading to my recommendations — later withdrawn — has not turned out the way I would have hoped. I take full responsibility and apologize to those that were hurt," Spaulding said. "I've become more of a liability than an asset to the Vermont State Colleges System. My ability to be an effective chancellor has eroded, and I don't believe that can be repaired quickly, if ever. And the VSCS does not have time to find out."
Prev
Next