City officials in St. Albans will review its beleaguered police department's hiring practices in light of the arrest this week of an officer.

In a lengthy statement released Thursday, Mayor Tim Smith continued to defend the department and longtime Chief Gary Taylor, who he said has "transformed" the force in recent years. Smith also detailed the existing "recruitment gauntlet" that would-be cops must pass. But the weekend arrest of officer Zachary Pigeon for sexual assault, kidnapping and other charges suggested that further changes are needed, Smith wrote.

"The Pigeon allegations indicate that we also need to increase the effectiveness of our recruitment and selection programs and ensure we are providing the training that reflects our values," the statement said.

City Manager Dominic Cloud will convene a task force charged with soliciting "help from outside experts," according to the statement.

'Dark Cloud' Over St. Albans PD After Officer Charged With Rape
By Derek Brouwer
Off Message
Thursday's announcement is the most public intervention by city leaders into a department scarred by scandal since Seven Days published video last summer showing former sergeant Jason Lawton punch a handcuffed woman inside a holding cell.

Despite Discrepancies, St. Albans Officials Stand by Police Chief
By Colin Flanders
Crime
Vermont State Police arrested Pigeon and his father, Allen, on Sunday. Zachary, 29, is accused of molesting a family member over a period of years in the mid-2000s. The pair are also accused of assaulting and threatening the woman at her home this month after learning that she'd told others about the sexual assaults. 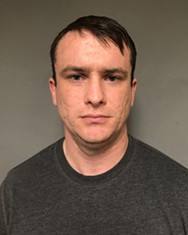 On Tuesday, Seven Days reported that Pigeon, who was hired last year, had been turned away in 2018 after a background check turned up allegations that he'd sent his ex-wife an "inappropriate picture" during their divorce.

Taylor hired him a year later. Then, after just weeks on the job, Pigeon was accused of referencing a racist slur during an conversation with a biracial colleague. Pigeon received a written reprimand, Taylor said, but the chief decided to keep him on the force and sponsored his training at the Vermont Police Academy.

The St. Albans City Council held a closed-door emergency meeting on Tuesday. The purpose of the meeting, conducted in executive session, was to evaluate a public officer or employee, according to the agenda. Cloud said Smith's statement was a result of that discussion.

The mayor's statement contained few details about the forthcoming task force, but Smith wrote that he is "also interested in continuing to make progress on community policing, on-going training for de-escalation and use of force, and strengthening the image of the department." Cloud said he did not have any additional information about the effort.

Pigeon isn't the only officer with connections to the St. Albans department to face charges for violent crimes. After he was fired, Lawton was arrested for assault late last year in connection with the holding cell incident.

Former St. Albans Cop Arrested for Punching Handcuffed Woman
By Colin Flanders
Off Message
Two other former officers face ongoing criminal investigations for on-duty misconduct. One of them, former corporal Mark Schwartz, resigned in March while under an internal investigation for using force during an illegal search, according to Taylor.

Taylor said that investigation was sparked by a Seven Days report that scrutinized Schwartz's use of a Taser in a separate arrest.

A Tased Man Claims Excessive Force by St. Albans Cops
By Derek Brouwer
Crime
Smith made reference to the other incidents in his statement.

"We have had some tough months recently with some high profile mistakes by a few officers," Smith wrote, "but we cannot forget the other 27 who continue to do a tough job well."

Read the full statement below: