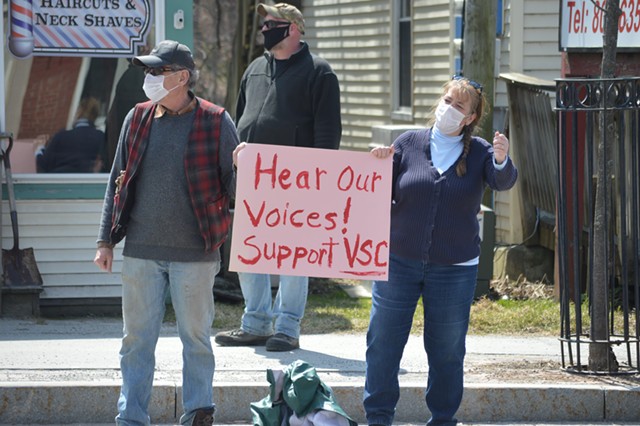 The Vermont State Colleges System could run out of cash and burn through its reserves by the end of summer if it continues on its current course, according to chancellor Jeb Spaulding. He evoked the sobering timeline on Monday to defend his proposal to shutter three campuses to address losses related to the pandemic.

“The reason for making this recommendation is because the entire system is at risk,” Spaulding said during a virtual meeting. “Without decisive action or with inaction, we jeopardize all of the pieces.”

The schools face financial challenges that have been compounded by the coronavirus pandemic. The system projects an operating deficit of up to $10 million this fiscal year, in part due to reimbursements to students sent home when the campuses closed last month, and another potential $12 million shortfall next year due to further drops in enrollment.

To cut expenses, Spaulding has proposed a dramatic restructuring that would close Northern Vermont University's campuses in Lyndon and Johnson and shift programs 100 miles away to Castleton University. The system would also close the Vermont Technical College campus in Randolph Center and move operations to that school's Williston campus. About 500 people would lose their jobs.

Trustees planned to vote on the proposal Monday, three days after it became public. But the board postponed any decision for at least a week in the face of vigorous opposition from critics. They argue that the proposal would not only worsen Vermonters' access to higher education, but threaten the vitality of the rural host communities.

Many lawmakers have joined those ranks, urging the college system this weekend to slow the process down. To that end, Vermont Senate President Pro Tempore Tim Ashe (D/P-Chittenden) and House Speaker Mitzi Johnson (D-South Hero) urged the college system to adopt a "bridge budget" under which the campuses could remain operational for the next academic year while the state searches for alternatives.

But Spaulding noted that the system would still need some sort of financial bailout even after throwing the three campuses overboard, and stressed that maintaining the status quo would come at a steep cost — even for a short period.

He said the college system would need up to a $25 million injection from the legislature to address its current deficit — funding that would need to be annualized if it planned to keep the three campuses intact.

That's a hefty price tag for the legislature, whose historic resistance to investing more in the system has helped Vermont consistently rank among the lowest states in financial support for public higher education.

Spaulding said he wasn't opposed to the trustees delaying their vote a week. But noting that the college system inches closer to insolvency each day, he argued that the legislature's involvement will only worsen matters.

“To do this in the legislature will do nothing but hasten inaction, which is more dangerous to people's access to education than taking very painful action,” Spaulding said.
Prev
Next