After Delta flight 5068 pulled up to the gate at Burlington International Airport late Tuesday morning, its staircase unfolded and out stepped the passengers — both of them.

The 50-seat Bombardier regional jet had carried just the pair of travelers from Detroit to BTV, the latest evidence of the near total collapse in air travel to the state’s largest airport.

“It was pretty weird,” Zack Maroon said of what was effectively a private jet flight home.

Maroon was the beneficiary of the federal government’s efforts to keep air travel on life-support during the coronavirus pandemic with billions of dollars in subsidies meant to keep airlines flying — whether it makes economic sense or not.

The $2 trillion federal CARES Act stimulus contains at least $60 billion for airlines if they service a minimum number of routes. Part of the goal is to keep flights serving regional airports like Burlington through September so the airlines don’t consolidate operations at larger hubs, such as Boston, explained Nic Longo, deputy director of aviation at BTV. 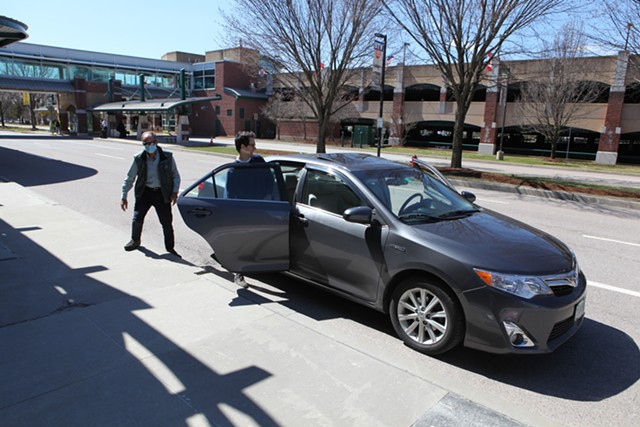 “That could be detrimental to regional airports like ours for years, and that’s something the bill tries to stop,” Longo explained.

It has resulted, however, in an increasing number of “ghost” flights that carry very few, if any, passengers, Longo said.

Frontier Airlines, for example, had been flying a seasonal route three times a week to Florida, but it recently canceled those flights. Instead, it added a little-traveled route between Burlington and Denver, presumably to be able to say it continues to serve the city, Longo said.

Many flights have been canceled. Flightradar24, a service that tracks commercial flights, reported 306 departures from BTV during the week that began on March 8. By this past week, departures had declined by more than 61 percent, to just 118. 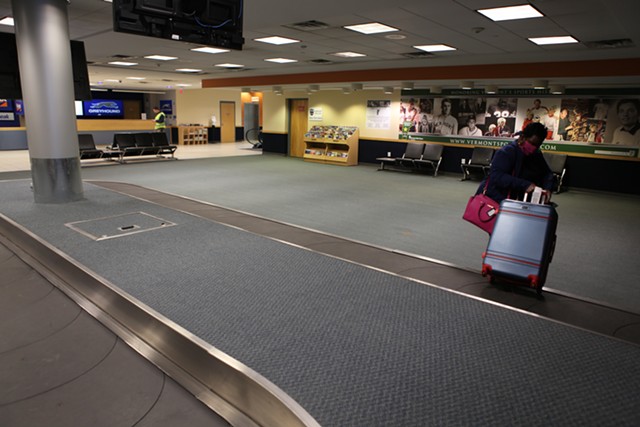 Before the pandemic, everything had been pointing to passenger traffic soaring in 2020. The airport had a decade-long high of 705,000 outbound passengers last year.

Now, revenue from ticket sales — $4.39 per outbound ticket — has evaporated. In addition, the CARES Act has allowed airlines to stop making some payments to airports. Revenues from parking, car rentals and concessions have plunged. The Skinny Pancake is closed, a metal gate across its menu advertising fresh local fare and craft beverages.

The airport is going to need an influx of its own, Longo said. Preliminary estimates are that the airport could lose about $11 million over the next six months. It could qualify for up to $7 million in stimulus money, but that would still leave a massive gap.

“We’re going to put everything we have into maintaining operations,” Longo said. “That may require some hard decisions.”

The airport wasn't completely dead on Tuesday. As she picked up her luggage at otherwise empty carousel, Mary Murphy, a nurse from Columbia, S.C., said she had come to Burlington to work for six weeks at a nursing home.

"There were just four of us on a big old plane," Murphy said of one leg of her trip.

Maroon also didn't have much choice but to travel. The 24-year-old investment adviser had been visiting his terminally ill grandmother in Florida.

While he was there, he was laid off from his job at a Burlington investment firm. As he waited to board the connecting flight in Detroit to get home, he thought for sure a flight with just two people on it would be cancelled.

“I was just thankful that it happened at all,” he said.