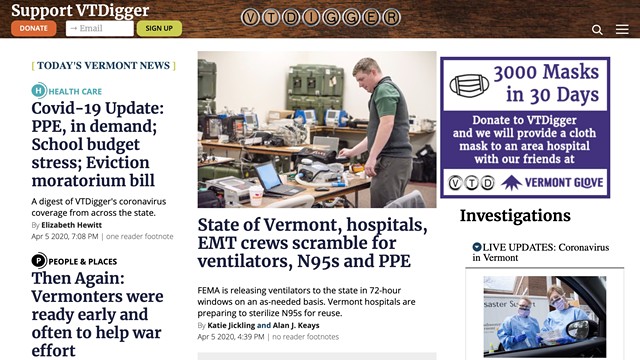 Journalists at VTDigger.org, the statewide nonprofit news outlet, have agreed to establish a newsroom labor union. They informed editor Anne Galloway and members of the organization's board of directors Monday morning of their decision and asked for voluntary recognition.

According to education reporter Lola Duffort, a member of the union's organizing committee, 15 of VTDigger's 17 editorial staffers have signed a petition seeking recognition. The bargaining unit, called the VTDigger Guild, represents full- and part-time reporters, photographers, interns and fellows, as well as staff columnists.

Galloway, who founded VTDigger in 2009 and also serves as executive director of its parent organization, the Vermont Journalism Trust, did not immediately respond to a request for comment.

Duffort said her colleagues have been organizing since last fall and had intended to announce their decision last month but held off so that they could focus on covering the impact of the coronavirus outbreak on Vermont.

"We're doing this because we think it will strengthen VTDigger," she said. "This organization will be better positioned to weather this crisis and and to begin growing once again afterward if the newsroom has a seat at the table."

Like many news organizations in Vermont and throughout the country, VTDigger has suffered a decline in revenue associated with the outbreak. Last week, Galloway announced that three staffers — two from the business office and one from the newsroom — had been laid off.

According to Duffort, those developments made their organizing efforts all the more urgent. "There's really no more important time to have a union than when your organization is feeling a financial crunch," she said.

Media Note: Layoffs at VTDigger, Furloughs at Gannett
By Paul Heintz
Off Message
Duffort said the VTDigger Guild would seek better and more consistent pay, benefits and time off. She and her colleagues see the organization as "a place where a lot of young journalists start off and do great work but don't necessarily stick around" because they can't afford to do so. "We really wanted to help create an environment where we could see people stay for the long term," she said.

Duffort said the organizing drive was not an indictment of Galloway or the board. "But we cannot effectively advocate for the newsroom's needs with our board and director unless we have that conversation as equals," she said. "And we cannot ensure that everyone's needs are met unless we do so in a collective manner."

VTDigger's union is affiliated with the NewsGuild, which is part of the Communications Workers of America. The NewsGuild also represents employees of the Associated Press, the New York Times and dozens of other newspapers around the U.S.

Though Vermont newsrooms have organized in the past, the VTDigger Guild is the only journalism union currently active in the state.
Prev
Next