In a speech equal parts sobering and uplifting — and marred only slightly by technical difficulties — Burlington Mayor Miro Weinberger focused his state of the city address Monday night on the Queen City's new normal in the age of the coronavirus.

Weinberger did not deliver his speech from a podium in City Hall's echoing Contois Auditorium, as he had eight times before. Rather, he spoke to Burlingtonians from his office using the video-conferencing program Zoom, which introduced its own aural challenges as the mayor was forced to pause several times to sort out audio glitches.

It was a stark and surreal scene. During a meeting known traditionally for its collegial atmosphere, filled with handshaking and back-patting, the mayor sat alone at a table, addressing a video camera. The city councilors, new and incumbents alike, were sworn in via video from the comfort of their homes.

"Tonight, we believe we are approaching the crest of the public health emergency," Weinberger said, referring to the approaching surge in COVID-19 cases. In the previous 19 days, he said, nine Burlington residents had died and dozens more were sickened.

"At the same time," Weinberger continued, "it is clear today that, thanks to the commitment and effort of the overwhelming majority of Burlington citizens and Chittenden County residents, we are succeeding in flattening the curve."

Still, Weinberger warned, hard days are ahead: Nursing homes could remain closed to visitors for weeks, and people may need to wear face masks and continue strict hand-washing protocols for up to 18 months, he said.

"Perhaps we will get relief sooner — many viruses do not do well in the summer heat, and it is possible that innovative medical treatments or even a vaccine could become available more quickly," Weinberger said. "While we can reasonably hope for better, we should plan and prepare ourselves for a long, challenging fight."

Weinberger did not dwell entirely on the dark aspects of the current crisis. He also reflected on the collaborative effort to relocate guests from Burlington's low-barrier homeless shelter to campers at North Beach, and he praised doctors and nurses on the front lines of the battle against the virus.

North Beach Campground Will Shelter Burlington Homeless
By Courtney Lamdin
Off Message
The mayor also touted the city's new COVID-19 Resource and Recovery Center, which has already processed 200 requests for help since opening on March 23. And he described a community program that enlisted numerous organizations to distribute face masks "to all of the essential workers who want them as soon as possible."

The city sourced 1,400 yards of thick fabric to produce "tens of thousands of masks by May 1," Weinberger said. The project is in collaboration with Rags & Riches, Lyric Theatre Company, the Milton Artists' Guild, Vermont Teddy Bear, Queen City Dry Goods and community sewers. The masks have already been handed out to staff at Hannaford and Feeding Chittenden, he said.

Weinberger also announced a new Burlington Green Stimulus Package intended to boost the city economy during the pandemic. The initiative will redirect "hundreds of thousands of dollars" in efficiency funds to programs that will lower energy bills for renters, help local contractors bounce back from lost revenue and other measures, the mayor said.

And in one of the few non-coronavirus-related tidbits, Weinberger announced that City Hall's Conference Room 12 will be renamed the Bushor Conference Room in honor of Sharon Bushor, who lost her city council seat in March after serving more than three decades on the governing body. The mayor also congratulated Tyeastia Green, the city’s first-ever Director of Racial Equity, Inclusion, and Belonging, whose first day was on Monday.

Weinberger closed his 40-minute speech with a note of gratitude, reflecting on Burlingtonians' small gestures of hope during a time of immeasurable change.

"Burlington continues to be a place where we leave chalk messages of greeting on the sidewalk for our neighbors walking by, where we volunteer to deliver meals to the front doors of seniors, and where, quite simply, we look out for each other," he said. "I know that we will get through these weeks and months ahead the same way we’ve gotten through the past few: together."


Hightower, who ousted Bushor, is the first woman of color to serve on the council. Stromberg defeated Democrat Adam Roof, and Carpenter replaced former council president Kurt Wright, who had been the body's lone Republican and did not run for reelection.

The new additions give the Progs a majority on the council. After the mayor's speech, the members proceeded to unanimously vote for Councilor Max Tracy (P-Ward 2) as the new city council president. Tracy called the role "an honor that comes with responsibility ... that is certainly heightened by this particular moment." 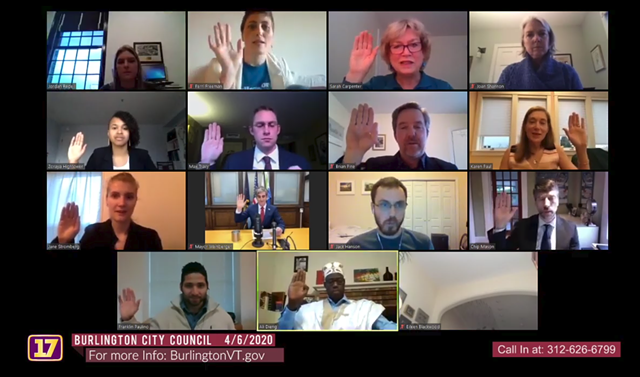 While the meeting known as "organization day" is generally a ceremonial affair, the new council quickly got to work, approving a tax relief package for Burlingtonians who are facing financial hardship due to the coronavirus crisis. The measure, which passed unanimously, gives some residents a two-month reprieve from paying their June tax bills.

Eligible taxpayers must have become unemployed, furloughed or have lost 30 percent or more in gross income because of the crisis in the weeks since March 1; or have an income that's 80 percent or less of the area median income; or be a business owner who can demonstrate "significant financial impact from COVID-19." Landlords who apply must agree in writing to not evict their tenants or charge them penalties on late rent.

Others who don't meet these criteria but still face pandemic-related adversity can also apply by the June 1 deadline.

Councilor Jack Hanson (P-East District) applauded the measure but urged his fellow councilors to continue "to be creative" in identifying ways to help renters.

"I hope we all feel that, and I hope we'll all work really hard every day to try to brainstorm ways [to help]," Hanson said.

Councilors also voted 11 to 1 to take out a $20 million temporary loan known as a tax anticipation note to make up for the anticipated delay in tax revenues. Dieng cast the lone no vote.

The city anticipates that 70 percent of taxes will be paid late due to the crisis, creating a cash flow problem. The loan must be paid back by August 12, according to a memo from Chief Administrative Officer Katherine Schad.

Schad said it's unclear if the low-interest note will affect Burlington's credit rating, which improved last summer to a "Double A" for the first time in a decade. The city estimates the loan will accrue just under $47,000 in interest.
Prev
Next