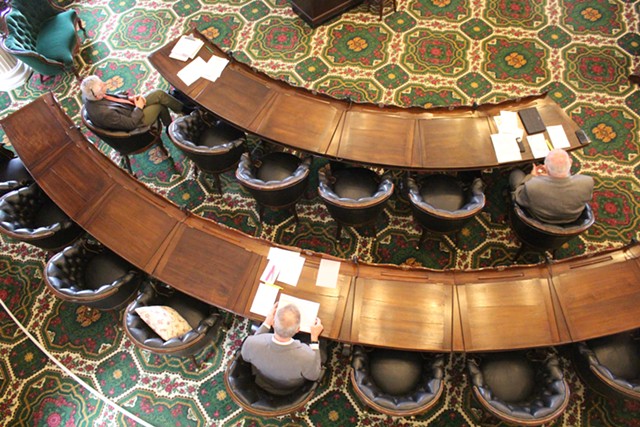 Sen. Dick Sears (D-Bennington) walked through a back entrance of the Vermont Statehouse on Tuesday, his left hand covered in blue plastic.

"It's a poop bag," the veteran senator explained. "Trying to keep myself safe. I use it to open doors and such." He clarified: "It's an empty one."

Sears had journeyed north to Montpelier to take part in the most unusual session of his 28-year career — one marked by gravity, camaraderie and gallows humor. Eleven days earlier, the legislature had adjourned to prevent the spread of the coronavirus in the cramped hallways of the Statehouse. Now, seven Vermonters were dead and 95 had tested positive for COVID-19.

To respond to the public health crisis and the economic meltdown it triggered, the Senate had returned to pass a series of emergency measures. The House was expected to follow suit on Wednesday.

During Tuesday's session, a skeleton crew of senators signed off on legislation allowing hospitals and other health care facilities to treat more patients and waiving the "provider tax" they pay. The lawmakers voted to allow retired and out-of-state health workers to treat Vermonters and to let providers perform their work by telephone or video. They moved to let workers collect unemployment if they quit over coronavirus concerns and waived a requirement that they continue seeking work. The legislators sought flexibility to hold the 2020 election by mail and to allow local and regional authorities to do their work remotely.

Senate leaders hastened to say that they were only getting started. "The list of items that we have not resolved today would be a scroll that would reach to the floor," Senate President Pro Tempore Tim Ashe (D/P-Chittenden) told his colleagues. "The heavy lifting is all ahead of us, and it's going to require our patience, a lot of flexibility and a lot of hard work moving forward."

When and how they will do that heavy lifting remains an open question. Over the previous week, lawmakers had convened by conference call — occasionally drowned out by the echo of unmuted phones — to hammer out details of the legislation. During Tuesday's session, senators moved to allow committees to vote remotely, but they held off on permitting the full Senate to conduct floor proceedings by phone. Majority Leader Becca Balint (D-Windham) explained that she was working with Minority Leader Joe Benning (R-Caledonia) on a resolution to do just that. "If the crisis gets more serious and we are in some kind of lockdown, we want to have a safety valve to be able to vote," she told her fellow senators. But, she added, it was critical to ensure that such a dramatic move would pass constitutional muster. "This could be perceived as the Senate moving too quickly on a very serious issue."

When Sears and his colleagues arrived Tuesday morning, the Statehouse was a ghost town. Gone were the lobbyists, lawyers, committee assistants, activists, pages, police officers and members of the public who typically fill the place on a weekday in March. Only seven reporters were authorized to enter the building, and just three were permitted to enter the Senate chamber.

Even many senators weren't welcome.

Ashe had arranged for only 16 of them to show — the minimum number required for the 30-member body to do its business. He urged the rest of his colleagues to steer clear in the interest of public health. (In the end, a 17th senator — there to serve as a backup — was let into the chamber.)

To allow for those left behind to register their presence and approval, Ashe convened a conference call before taking to the floor. Senators who were in the building listened in from a first-floor meeting room — sitting more than six feet apart from one another — while the rest dialed in from home.

Sen. Jeanette White (D-Windham) said by phone that she had only missed two days, when her son broke his back, during her 18 years in the Senate. "I am very sad not to be there today, but I understand that it's best for all of us," she said before reflecting on the historic nature of the day. "When I walk into the chamber and sit down in my seat, I can feel the swirl of years and years of debate and stuff going on in the chamber, and this will be added to that swirl."

Another remote participant, Sen. Randy Brock (R-Franklin), praised the nonpartisan manner in which the Senate had done its work. "In some parts of the country, we see continued political posturing and partisan divide, but here in Vermont, in this body, over the past two weeks, we've seen what makes the American political system, historically, the envy of the world," he said. "You've made me very proud to serve in this body."

When the telephonic session ended, the 17 senators filed out of the room, one by one, and marched upstairs to the Senate floor. There, Lt. Gov. David Zuckerman gaveled them in and Sen. Debbie Ingram (D-Chittenden), an ordained minister in the United Church of Christ, offered a devotional.

"I have been waking up in the middle of the night anxious and upset more than I ever have in my life, and I am sure that I am not alone," she said. "They say that there are no atheists in foxholes. Right now I would say we're in a great big darn foxhole all together."

Rather than sit side by side in the Senate's three rows of desks, the members who were present scattered about the room in unconventional assigned seats: one in a corner, two on couches, three in window wells, four in the gallery. Senate Secretary John Bloomer wore a pair of black gloves.

To limit their time on the floor and avoid having to return in the coming days, senators had worked together and with their counterparts in the House to ensure that the emergency bills were acceptable to both chambers, all political parties and Gov. Phil Scott.

Members of the committees of jurisdiction explained the legislation from the floor, but questions were few and debate was limited. Within an hour and a half, they had dispensed with their business and sent a handful of bills and resolutions to the House.

As they prepared to adjourn, Benning took a moment to recognize "the common person on the street" who had lost his or her job or whose profession, previously undervalued, had become essential to survival: grocers, cashiers, gas station attendants.

Benning expressed a note of optimism — that Vermont could survive the coronavirus pandemic. "We are about to embark on stormy waters as we get all signs that there is a storm coming, but we have a very solid ship of state," he said. "It has a very strong bow and a rock-solid and well-tillered rudder."

Sen. John Rodgers (D-Essex/Orleans) offered his own words of comfort — or, at least, a prescription for finding it. "After hearing the devotional, I know lots of folks are having trouble with anxiety and sleeping in these tough times, and as a proud Vermont hemp farmer, I would just suggest that CBD helps tons of people with anxiety and with sleep."

Soon thereafter, the Senate adjourned and its members filed out of the chamber. Zuckerman donned his own pair of black gloves, pulled an N95 mask over his ponytail and followed them out the door.