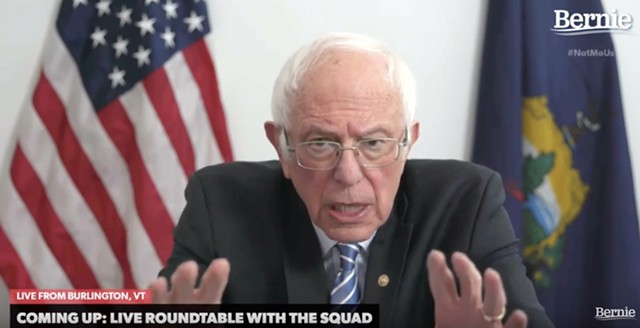 During a campaign livestream Sunday night, Sen. Bernie Sanders (I-Vt.) railed against a $1.8 trillion package meant to prop up the economy and deliver relief from the coronavirus pandemic.

"I do have to say that I was really stunned to read aspects of the Republican bill that has been proposed," he told his viewers.

But an hour earlier, when that same bill came up for a key vote on the floor of the U.S. Senate, Sanders was nowhere to be seen. Unlike most of his colleagues, who were in Washington, D.C., Sanders was back home in Vermont, preparing to address supporters from his Burlington campaign office.

Republicans needed 60 votes on Sunday to advance the bill, which would provide $1,200 cash payments to most Americans, extend unemployment benefits, and bail out businesses, states and local governments. The procedural vote ended in a 47-47 tie. Vermont's other U.S. senator, Patrick Leahy (D-Vt.), opposed it.
Of the six senators who missed the vote, five were self-quarantining because they either tested positive for the new coronavirus or had close contact with someone who had. The sixth was Sanders.

A spokesperson for the senator did not immediately respond to a request for comment Sunday night on his absence.

Over the past two weeks, as the pandemic has ruled out campaign rallies, Sanders has held a series of live-streamed events — often featuring activists, politicians and live music. Sunday night's event included a performance by Grandson and remarks by three prominent supporters of his presidential campaign: Reps. Alexandria Ocasio-Cortez (D-N.Y.), Ilhan Omar (D-Minn.) and Rashida Tlaib (D-Mich.).

"What we're seeing today with the Senate GOP bill is just a complete mockery of public service," Ocasio-Cortez said during the event.

Sanders has continued holding such events even since his campaign manager announced last week that Sanders was planning to "assess" his continued presence in the race.

Sanders' campaign has kept him out of the Capitol for much of the past year. According to GovTrack, a nonpartisan research organization, he missed more than 94 percent of roll-call votes from last July through last September and 100 percent of votes from October through December. From January of this year until last week, he missed nearly 53 percent of votes.

The legislation currently under consideration by the Senate would be the third coronavirus relief package passed by Congress. Sanders missed the vote on the first but was present for the vote on the second.

Sanders certainly made clear Sunday night how he felt about the third package.

"We need policies now which benefit the working families of this country, that benefit low-income people, that benefit the most vulnerable," he said. "We're not here to give handouts to large corporate interests without any strings attached."
Prev
Next