by Courtney Lamdin and Colin Flanders 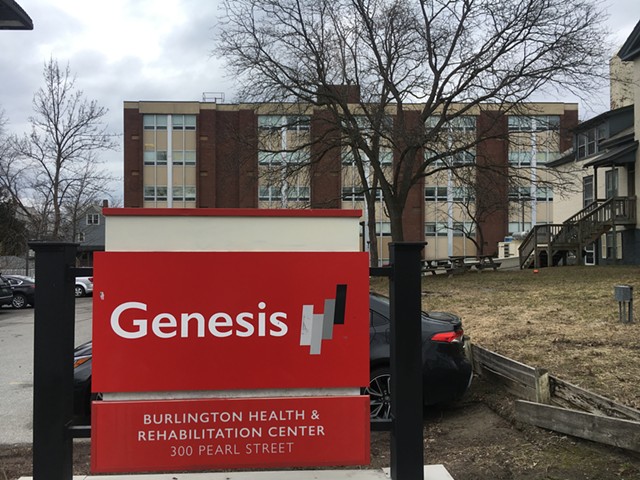 Three more people have died at the Burlington nursing home that is the site of the largest outbreak of coronavirus in Vermont.

Health Commissioner Mark Levine said Monday afternoon that 14 patients and one staff member at the Burlington Health & Rehabilitation Center have so far tested positive for the virus. The facility now represents a fifth of Vermont’s 75 total reported cases. Four of the state's five deaths have been associated with the home.

“As we've increased our test capacity, we are having more positive tests,” Levine said during a press conference Monday afternoon. “That should not be a surprise to anyone.”

Seven Days reported on Sunday that some patients, family members, and staffers of Burlington Health & Rehab have expressed concerns that the state and the home haven’t been able to contain the infection. One of those patients, Burlington resident and activist Albert Petrarca, who was recuperating there after foot surgery, urged state leaders to let some people leave the facility.

Levine said Monday that there “may be an opportunity in the very near future” for a “select group” of patients to be discharged, particularly those who were there for rehabilitation.

Levine repeatedly emphasized that the home has done everything it can to prevent further spread of the virus. Staff are checking the temperature of anyone who enters the building, he said, and the health department is working closely with the home to initiate additional proactive steps to “bolster” what it was “already doing.”

“We found no fault in their infection-control practices or procedures,” Levine said.

The health department is also in frequent contact with the Centers for Disease Control and Prevention to discuss the situation, Levine said, most recently on a 9 p.m. phone call on Sunday. The health commissioner had previously said the state was asking the CDC to consider sending a team to Vermont. Monday,  Levine said the feds have taken the position that the state has done everything that can be done.

“They have no desire to come here,” he added, noting they are dealing with outbreaks, including ones in nursing facilities, nationwide.

As of Friday evening, more than a quarter of all U.S. coronavirus deaths involved eldercare home residents, according to a Washington Post analysis. Life Care Center of Kirkland in Washington State was hit first, and the virus has killed nearly a third of its 120 residents to date. Within a few weeks, at least 73 homes in 22 states had reported infections, the Post found.

The outbreaks at the Burlington home have further underscored the vulnerability of elderly people to the disease. State officials have consistently stressed this fact in public remarks urging people to take it upon themselves to prevent spreading the virus.

Despite some lapses, Levine said, most Vermonters have taken social distancing calls to heart. “I do see remarkable change in a very, very short period of time, which I think is commendable,” he said.

But Scott warned that further restrictions are inevitable as the virus continues its spread. He said Vermonters should expect new measures “very, very soon,” likely in the next couple of days. And while the governor fell short of saying that he planned to require that people shelter in place, as some states have, he said he hoped to enact measures that ensure "those that can or should" stay home are doing so.

“It's not a question any more of if,” Scott said of further restrictions. “It's a question of when.”

Scott also highlighted one recent state effort to help hospitals prepare for an expected increase in patients due to the virus. The governor said he has directed a Vermont National Guard team to prepare the first of three possible sites to handle a surge in patients.

“While we hope we don't have to use them, we must be prepared for this possibility,” Scott said.
Prev
Next