Albert Petrarca has been holed up for weeks on the third floor at Burlington Health & Rehabilitation Center, where he has been recovering from foot surgery. He is acutely aware that coronavirus is sweeping through the building, and he’s a nervous wreck.

In recent days, 12 elderly residents on the fourth and fifth floors above him have tested positive for COVID-19. One has died.

Petrarca, who is 70, is doing all he can to keep from getting sick. He keeps his door shut day and night. Naturally, the Burlington firebrand, known for his dogged protests against a Church Street mural, is also grilling the staff about their response. He has even summoned the facility’s director to demand that each of the 90 patients and 130-plus staffers be tested for the deadly virus.

So, as the case count rises, Petrarca is fuming.

“Just in the same way Trump failed to implement all that was necessary, that was the same here at the rehab center,” he said by phone late Saturday night.

Fear, confusion and frustration have swirled inside the Pearl Street nursing home as it has become the epicenter of the coronavirus outbreak in Vermont. At least 14 staff are quarantined at home as a precaution, forcing facility owner Genesis HealthCare to bring in replacement workers.

Vermont Reports 20 New Cases; Seven More at Burlington Nursing Home
By Derek Brouwer
Off Message
On Sunday, Burlington Mayor Miro Weinberger, citing a private health department briefing, said Genesis was preparing to “carefully” evacuate rehab patients, such as Petrarca, before the virus spreads to the third floor. Later that afternoon, a Genesis spokesperson said “all discharges are on hold pending direction from the Vermont Department of Health.”

A total of 52 people in Vermont have tested positive for COVID-19 since the first case was discovered on March 7. Nearly a quarter of those involve Burlington Health and Rehab residents. The first case there was identified just last Monday, underscoring how quickly the infection can overtake a vulnerable population in close quarters.

Virus Claims First Vermonters: Nursing Home Resident, VA Patient
By Derek Brouwer
Off Message
State health officials have already sought assistance from their federal counterparts at the Centers for Disease Control and Prevention as they rush to contain the spread. The fear is that the home will be devastated as badly as a growing number of nursing homes across the country.

As of Friday evening, more than a quarter of all U.S. coronavirus deaths involved eldercare residents, according to a Washington Post analysis. Life Care Center in Kirkland, Wash., was hit first, and the virus has killed nearly a third of its 120 residents to date. Within a few weeks, at least 73 homes in 22 states had reported infections, the Post found.

“Kirkland, Wash., has been on my mind since I heard about this infection,” Weinberger said during a Friday press conference.

The infections at the Burlington facility have occurred despite what Genesis said were proper protocols enacted as soon as signs emerged that the virus had arrived on American shores. Staff have been “hyper-vigilant” and followed Health Department directives “to the letter” since the first case was reported, company spokesperson Lori Mayer said.

But some patients, family members and staffers of Burlington Health and Rehab worry that the state and the home haven’t been able to contain the infection. Their uncertainty is compounded by the fact that, even at the site of the state’s largest outbreak, only those who are showing certain respiratory symptoms are being tested. Many with the virus don’t show symptoms for several days.

“After the situation in Kirkland, it should have been mandatory that when you’ve got a cluster like this, that you would automatically test everyone,” Petrarca said. “We should have learned that.”

Nine patients with coronavirus still reside at the facility, per a Health Department directive that only COVID-19 patients who require hospitalization may leave, Mayer said.

Dozens of people at the facility have been swabbed for testing, according to the Health Department — an indication that they were ill with flu-like symptoms. So far, no staff have tested positive.

For those who haven’t been tested, the last few days have been marked by gnawing anxiety. One staffer, who asked to remain anonymous because she is not authorized to speak to the media, said she worked directly with a resident who tested positive but she was not immediately notified of that test result. She said she was later told her infection risk was low. She’d worn a mask and gloves while caring for that resident, but not a gown. Staff weren’t wearing them until the first coronavirus case at the home was confirmed, she said.

She also told Seven Days that she has seen some employees pressured into working while not feeling well, including one who worked with a fever last week before being sent home.

A Genesis spokeswoman said in an email that the allegation was "unequivocally false."

"We have been screening all employees for fever and symptoms since March 6, 2020 and log every screening," said Mayer. "Any employee who registers a fever or has symptoms is sent home immediately. In fact, we instituted this screening in advance of CDC guidelines in order to protect our patients, residents and employees as the pandemic heightened around the country. "

All staff must now go through an infrared temperature check before entering the building, VTDigger.org reported Saturday.

So far, no one on the third floor, where Petrarca is being treated, has tested positive for the virus. Three residents were tested, but the results were negative, the company said.

Stacey Savage, whose mother was discharged from the third floor on Tuesday, just hours before the first COVID-19 case at the home was announced, said she spoke to facility administrators for the first time on Friday. They told Savage that her mother’s chances of contracting the virus on that floor were “slim,” she said.

That’s little reassurance to Petrarca, who was a nurse in an intensive care unit for 16 years. He said one case in the building could easily spread without the right precautions. So when he heard about the first case from a friend who had watched the news, he called in the director, Ross Farnsworth, to demand answers. 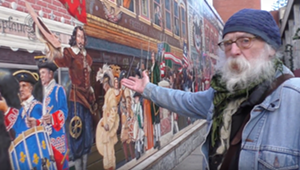 “I just chewed his ass out and I said, ‘How come you didn’t let us know that there was someone who was tested positive?’ And all he said was, ‘I’m sorry,’” Petrarca said.

Petrarca said he went two days last week without a nurse taking his temperature — despite the fact that company officials say they’re mandating these simple screenings be performed twice a day at all their centers. He also saw staff on his floor providing care without gloves or masks.

Genesis is one of the largest post-acute care providers in the country, with hundreds of nursing homes and senior communities in 26 states, including nine in Vermont. The company reported $4.6 billion in annual revenue last year. Its declining stock, however, lost another third of its value last week, dropping to just $0.79 per share.

Nursing Home Conglomerate Settles Vermont Neglect Allegations for $740,000
By Andrea Suozzo and Kevin McCallum
Off Message
On an earnings call Tuesday — the same day that Vermont officials reported the first case at Burlington Health and Rehab — company leaders told investors that Genesis had just one case among its 387 facilities.

“We’re doing everything humanly possible to protect everyone’s interest,” CEO George V. Hager, Jr. told investors. “First and foremost, the interest of our patients and our employees and their safety.”

Petrarca doesn’t think the company — or the state — is doing enough. On Sunday morning, Petrarca emailed Lt. Gov. David Zuckerman from his third-floor room and called upon state officials to take control of the facility, which he termed a “corporate petri dish.” “Health care over corporate profits,” he urged.

In the meantime, Petrarca wants the state to follow through with an evacuation plan — and hopes that he remains without symptoms until then.

“So I can get the hell out of here,” he said.
Prev
Next