Vermont Senate to Return to Statehouse for Coronavirus Measures | Off Message

Vermont Senate to Return to Statehouse for Coronavirus Measures 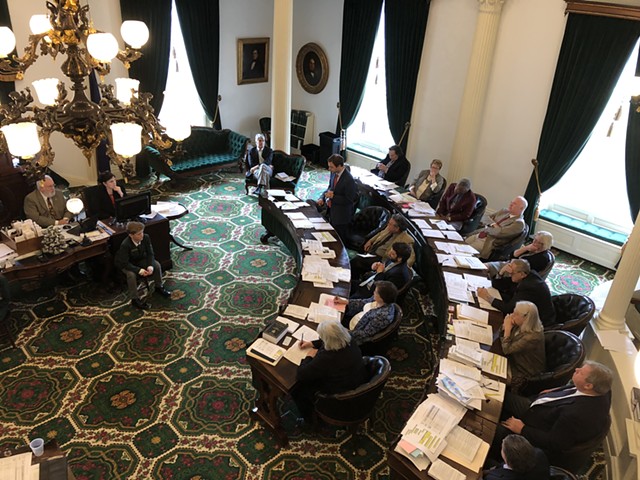 The doors of the Vermont Statehouse will reopen next Tuesday for the Senate to respond — briefly and safely — to the coronavirus pandemic.

On a conference call with his colleagues Friday morning, Senate President Pro Tempore Tim Ashe (D/P-Chittenden) announced a plan to bring a bare minimum of senators back to Montpelier to sign off on bills deemed essential to the state's response to the outbreak. They include measures to increase access to unemployment insurance, bolster the state's health care workforce and allow local governments to vote remotely.

"The timing is critical for these particular items," Ashe said. "I think the vision here is only to put forward items that are effectively consensus with the House. I assume the governor's team will also be onboard with the provisions."

Faced with fears that coronavirus could spread quickly in the cramped Statehouse, which is populated by many elderly lawmakers, the legislature voted last Friday to adjourn until Tuesday, March 24, and moved to close the building to all but essential personnel.

Ashe proposed that only 16 of the Senate's 30 members volunteer to return to the Statehouse — the number required for the body to do its business. He said the group would "stagger our voting such that we are able to keep people properly distanced, keep the numbers in any one place reduced ... and then get it done, get it over to the House and get out."

The pro tem emphasized that the Senate would tread carefully in determining what business to consider without all members present. "We would only put forward things that we believe would be effectively 30-to-nothing votes or as close to 30 to nothing as possible, so it's not like we're gonna be putting in controversial, debated, surprise elements," he said.

During a phone meeting of the Senate Rules Committee later Friday morning, Senate Secretary John Bloomer said that those who attended the session could be scattered throughout the Statehouse in order to avoid transmitting the virus to one another. They would be able to listen to the proceedings from the Cloak Room, the secretary’s office and elsewhere, then vote one-by-one in the Senate chamber. “There is an ability to keep distance and numbers down in any one location and still keep quorum requirements,” Bloomer said.

According to Bloomer, the Senate could invoke its constitutional authority in times of emergency to close the chamber to the public and the press. The state Constitution states that the doors of the Statehouse “shall be open for the admission of all persons who behave decently, except only when the welfare of the State may require them to be shut.”

Ashe later clarified in an interview with Seven Days that the Senate would ensure press access to the session.

“We’re absolutely committed to being subject to public and press scrutiny and are going to work with the press corps to figure out a fair way to keep press eyes and ears on our work, but do so with the least number of bodies in the room," he said.

It was not immediately clear when the House would return to sign off on the legislation, some of which it considered and approved in the hours before adjourning last week. In a conference call with reporters Friday afternoon, Speaker Mitzi Johnson (D-South Hero) indicated that her members would likely come back at some point next week.

The details of the legislation that may come up next Tuesday are still being hammered out in Senate committees, which have been meeting this week by phone.

One measure would allow businesses to temporarily lay off employees without seeing a hike in their contributions to the unemployment fund, and to expand who can qualify for the benefits. Another would help hospitals respond to the outbreak by waiving licensing requirements and allowing them to treat a surge of patients. A third would temporarily amend the state's open meetings law to allow local government bodies to vote by phone.

During Friday’s meeting of the Senate Rules Committee, members also discussed whether to allow committees to take votes outside of the Statehouse, which is not currently permitted. The committees that have met by phone this week have only discussed legislation and have taken no votes.

The senators on the call instructed Bloomer to draft a rules change that would enable remote voting for committees — but not for the full Senate — for a limited period of time, with the Rules Committee setting parameters for how the public and the press could monitor such actions.

Any rules change would require a full vote of the Senate, likely next Tuesday.

The House may take an entirely different approach. During the call with reporters on Friday, Johnson said the House may move next week to temporarily allow for floor votes to take place remotely. Committee votes would still take place in person.