Two elderly Vermonters died Thursday after contracting the new coronavirus, Gov. Phil Scott announced, including a resident of a Burlington nursing home where health officials are still assessing the risk of a wider outbreak.

Their deaths are the state’s first to be linked to the global pandemic that has killed nearly 10,000 people.

“There’s no doubt this is sad for all of us,” Scott said at an evening press conference. “But it’s not unexpected news.”

Vermont Health Commissioner Mark Levine said the other deceased individual was a Windsor County man who had been admitted to the VA hospital in White River Junction. Both were over age 80, according to the Vermont Department of Health.

The home’s first case was confirmed Tuesday amid some confusion. Burlington city officials initially said there were two positive tests at the home, contrary to the single case reported by Genesis and the health department, but have since walked that back. Further, health officials previously described the nursing home patient as male, which was apparently incorrect.

More than 48 hours later, state specialists are still trying to assess the extent of exposure within the facility, which currently houses about 90 residents and rehab patients.

“Our epidemiology team is actually on site examining who might have been exposed, who should be tested,” Levine said Thursday night.

Eldercare homes are especially vulnerable to deadly outbreaks from the new coronavirus, dubbed COVID-19. Elderly people and those with compromised immune systems have died at far higher rates than others who are infected with the virus. At Life Care Center of Kirkland in Washington State, at least 30 residents were killed in recent weeks, out of 180 or so total deaths nationwide. The Centers for Disease Control and Prevention said this week that the virus likely entered that facility through staff members.

Given the nature of the virus, Vermont Department of Disabilities, Aging and Independent Living Commissioner Monica Hutt this week said she wouldn’t be surprised to see more cases at the Burlington home.

A Genesis spokesperson on Tuesday said that Burlington Health & Rehab had been “hyper-vigilant” about preventing exposure by screening visitors and following other state and federal guidelines for long-term care facilities.

“We have also notified patients, residents and families and will remain in close contact with them in the coming weeks,” the company said.

But any outreach so far has not included Stacey Savage, whose 75-year-old mother was discharged from Burlington Health & Rehab the same day the positive test was announced.  Savage’s mother had spent three weeks recovering there after being hospitalized for a blood infection.

Savage, 49, said the staff appeared in a “complete panic” when she came to pick up her mother on Tuesday. That evening, she and her mother learned why — by reading the news. Savage said in an interview Thursday night that no one has contacted her about the situation.

“I have heard absolutely nothing,” she said.

On Wednesday, her mother called the family’s doctor in South Burlington — in accordance with current state guidance — to see how to get tested for COVID-19. She received a frustrating response, Savage said: Her mother didn’t qualify for testing because she wasn’t showing symptoms.

“This stuff is going to spread rampant,” she said, referencing the outbreak in Kirkland, Wash. “So test people.”

Vermont health officials announced just 56 new test results on Thursday, including three positives. The number of tests was the lowest in six days, which appeared to underscore how limited availability of testing kits has shaped officials’ response.

The state on Thursday said it will “prioritize samples from health care workers who are symptomatic, patients who are hospitalized, long-term care facility residents, people who are incarcerated, who are immunocompromised, and other high-priority groups.”

Seven Days has requested information about the number of tests administered at Burlington Health & Rehab and whether the state believes other residents, staff or facilities are at an elevated risk. That information was not available as of Thursday night. Levine, at the evening press conference, said he didn’t have immediate guidance for families connected with the nursing home.

“It’s hard to give them guidance until we complete our assessment and our testing,” he said. “There will be guidance coming, for sure.”

In the meantime, Savage and her husband are living — nervously — alongside her mother. Savage is her caretaker and only child. Like many Vermonters, Savage is working from home as the virus spreads.

“I’m anxious, I’m curious, and I’m concerned,” she said. “If my mother was to contract it, she could potentially die.” 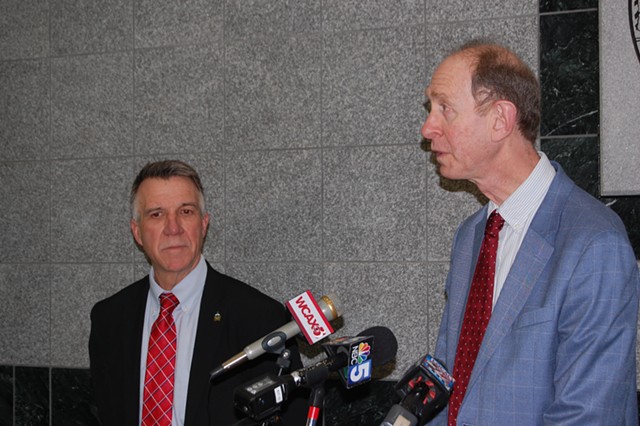