Amtrak Trains Will Be Kept in the Rail Yard in Burlington 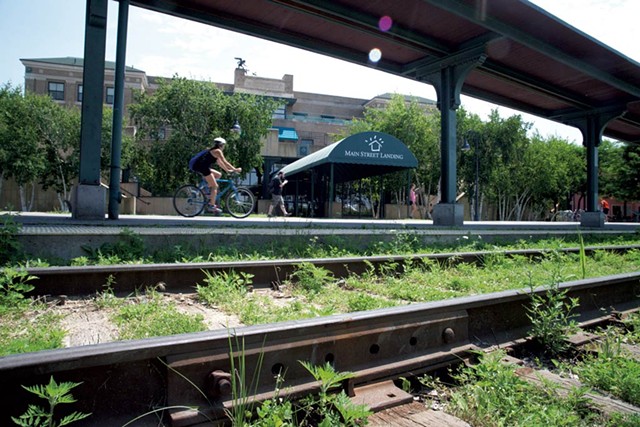 A controversial plan to park Amtrak passenger trains overnight in a busy section of Burlington's waterfront has been derailed.

The trains will instead be parked just to the south in the Vermont Rail System rail yard, the Vermont Transportation Agency announced Thursday afternoon.

That's good news to critics who said trains should not be allowed to spew noise and fumes overnight in a heavily visited section of Burlington's redeveloped, recreational waterfront. The area between Maple and College streets had been under consideration.

"My faith in humanity has been restored," said Melinda Moulton, CEO of Main Street Landing, who lobbied for restoring passenger rail service to Burlington but wants the trains to park in the rail yard.

The train service is expected to begin in 2021 with Amtrak’s Ethan Allen Express, which currently runs from New York City to Rutland via Albany, N.Y. Amtrak will extend its run to Burlington after track improvements are completed and the train will arrive at Union Station, which has been redeveloped by Main Street Landing.

“This decision represents substantial assessment and collaboration by VTrans, the City of Burlington, and Vermont Rail System, as well as serious consideration of public response,” state Transportation Secretary Joe Flynn said in a press release.

It's a "great outcome for Burlington that achieves all the goals the City has had throughout this process,” Weinberger said in a press release. “Thanks to close collaboration between the City, the Vermont Agency of Transportation, and Vermont Rail Systems, we are restoring passenger rail service to downtown Burlington for the first time in decades, while also protecting the vibrancy of our waterfront, improving the Bike Path, and minimizing impacts on Burlington residents and businesses."

The plan will not impact existing rail yard operations, according to the press release, and the new overnight parking location means that a second track between Maple and College streets will not be needed.

A second track could have allowed fuel tanker cars as well as passenger trains to block the central waterfront, critics had worried.

"All the years that we've all worked to create this beautiful place for people was not the place to be storing and servicing trains,'' Moulton said.
Prev
Next