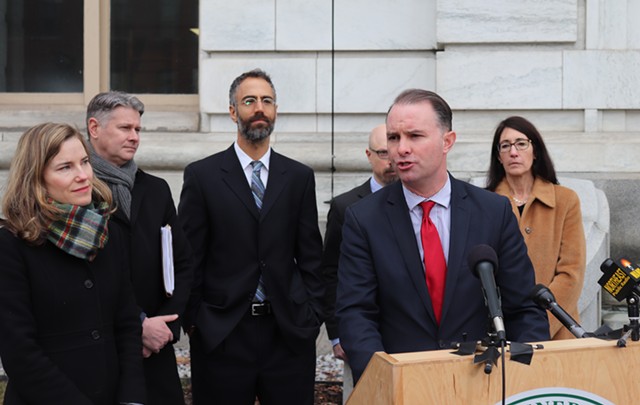 Controversial software-maker Clearview AI, a secretive company whose existence was publicly revealed by the New York Times in January, is facing a legal challenge in Vermont.

The Attorney General's Office filed suit against the face-search company on Tuesday, alleging its practice of scooping up billions of online images to build a facial recognition app violates Vermont's consumer protection statute.

The civil suit is also the first legal test of a provision in the state's data broker law, which was the only one of its kind when passed in 2018.

Clearview AI practices infringe upon Vermonters' right to privacy, are unfair and deceptive, and expose residents — including minors — to a "surveillance economy" without their consent, Attorney General T.J. Donovan said at a press conference outside the Vermont Superior Court building in Chittenden County, where the case will be heard.

"We need to draw the line and hold the line here in Vermont to say that privacy matters in the online world," Donovan said.

Taking Names: Vermont Builds Dossier on Firms That Sell Our Data
By Derek Brouwer
Business
Clearview AI's technology allows clients to identify someone by comparing a photo to the company's database of billions of images it has gleaned from the web. Search results are returned instantly.

The company was operating almost exclusively outside public view until January 18, when the Times published an investigation under the headline, "The Secretive Company That Might End Privacy as We Know It."

Facial recognition is a controversial frontier in big data, but the report described a seemingly cavalier approach by founder Hoan Ton-That, of California. Much of Clearview AI's database contains images downloaded in bulk from social media platforms such as Facebook, LinkedIn, YouTube, Twitter and Venmo, even though many of those platforms prohibit such use.

Hundreds of law enforcement agencies were already using the small startup's software, purportedly to identify criminal suspects, when the Times published its story.

Just weeks after the Times report, Clearview AI acknowledged a data breach in which its client list was leaked. The leak revealed that in addition to working with Immigration and Customs Enforcement and police, Clearview AI counted numerous private companies among its users, including Rite Aid, Kohl's, Walmart, and Wells Fargo, according to a report by BuzzFeed News.

Donovan on Tuesday said that no state or local law enforcement have used Clearview AI's software. A BuzzFeed reporter who reviewed the client list noted that "Vermont was the only state that did not have a police department or a state entity that tried Clearview AI's facial recognition app."

Based on data viewed by BuzzFeed News, Vermont was the only state that did not have a police department or a state entity that tried Clearview AI's facial recognition app.

Vermont lawmakers in 2018 took the first step in the nation toward bringing companies like Clearview AI to light. The state's data broker law required companies that buy and sell personal data to register and provide state regulators with basic information about their practices and policies.

Clearview AI registered in Vermont on January 14 — four days before the Times story came out. Its registration document acknowledged that the company collects images on minor children, and that it only allows individuals to "opt out" of the database in jurisdictions that require opt-out provisions. Only California mandates such an option.

Donovan's office claims that Clearview AI violates that provision because it uses screen-scraping technology to indiscriminately download billions of photos on the web.

The state is also seeking an immediate injunction that would bar Clearview AI from collecting Vermonters' photos — and to remove those it already collected from its database.

It's not clear whether the company even has the ability to reliably scrub its database of an entire state's residents. When a Vice reporter tried to opt out, the company said she would need to send a photo of herself.

"This limited but critical degree of privacy, this barrier between normalcy and the Orwellian dystopia that is becoming reality in some parts of the world, is at risk of being eliminated," the state claimed.

In a statement, lawyers for Clearview AI described its software as "one of the most innovative, effective and accurate law-enforcement tools on the market" and emphasized that the images it collects are publicly available.

"We would welcome the opportunity to work collaboratively with the State of Vermont — outside the adversarial environment of a courtroom — to further refine our proven, crime-solving technology for the benefit of all," the statement continued. "However, we are ready to defend our, and the public’s, Constitutional right to access freely available public information."

A hearing on the state's motion for an injunction is scheduled for March 20.

Read the complaint below: