Molly Gray Kicks Off Campaign for Lieutenant Governor | Off Message 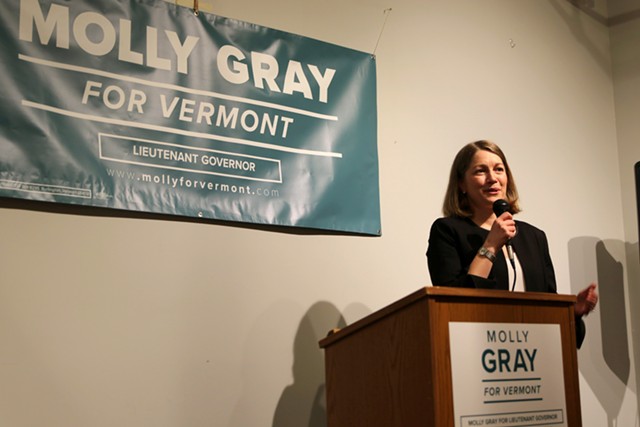 Madeleine Kunin first met Molly Gray during a campaign stop in 1984. The former was running to become Vermont’s first female governor. The latter was less than a year old.

More than three decades later, the two found themselves back on the trail — only this time, the campaign signs had a different name.

“I don't think we've been in a more dangerous political time than now. It's easy to get depressed," Kunin said Thursday night before a crowd of roughly 100 people at the Queen City Brewery in Burlington. “But Molly’s a bright spot as we look at the political horizon.”

“She is certainly the best candidate — the most impassioned candidate — to be our next lieutenant governor,” Kunin later added.

Gray, a Democrat who announced last month that she is seeking the state’s No. 2 office, officially launched her campaign on Thursday with a daylong jaunt that began in Bradford and ended in Burlington.

Speaking before a group of friends, family and supporters, Gray said she's running to join "a new generation of bold Vermont leadership."

Gray graduated from the University of Vermont in 2006 and worked for Rep. Peter Welch's (D-Vt.) congressional campaign that year. She then served as a Welch aide in Washington, D.C., but eventually returned to the Green Mountain State to attend Vermont Law School. She now works as a prosecutor in the Attorney General’s Office and lives in Burlington.

Gray’s tour made her the first candidate to hold a formal campaign kickoff event since the flurry of announcements in the wake of news that Lt. Gov. David Zuckerman, a Progressive/Democrat, is running for governor. Others seeking the Democratic nomination include former gubernatorial candidate Brenda Siegel, Senate President Pro Tempore Tim Ashe (D/P-Chittenden) and Sen. Debbie Ingram (D-Chittenden).

She called for expanding broadband throughout the state and a “pipeline” from schools to technical centers to the workforce. She vowed to work on passing a paid family leave program, recalling how she was recently forced to consider taking unpaid leave to care for a loved one — and potentially defaulting on her school loans in the process. And she spoke of growing the renewable energy sector to better mitigate the impacts of climate change on Vermont’s environment, which she called “the soul of our state.”

“As your lieutenant governor, I will protect the land that's protected us. I will care for the land that's taken care of us. And I will bring all of us into a conversation about that,” she said.

Gray’s willingness to work with others was among many attributes earning the praise of Burlington City Councillor Joan Shannon (D-South District), who said the candidate is “not the kind of politician whose ego enters the room first.”

“We need to have leaders that have confidence without arrogance, and that have humility at the same time. That have perseverance without bullying. And have compassion that’s coupled with activism,” Shannon continued. “I really see that in Molly.”

Kunin, who taught Gray at UVM, agreed, praising her "informal" mentee for taking on the challenge of running for office. “In order to make a difference, you have to be there,” Kunin said, emphasizing the need for women to enter politics.

Kunin then recalled an old phrase that has been used to demonstrate the importance of representation: “If you’re not at the table, you’re on the menu.”