At S.C. Debate, Sanders Feels the Fire But Doesn’t Get Berned | Off Message

At S.C. Debate, Sanders Feels the Fire But Doesn’t Get Berned 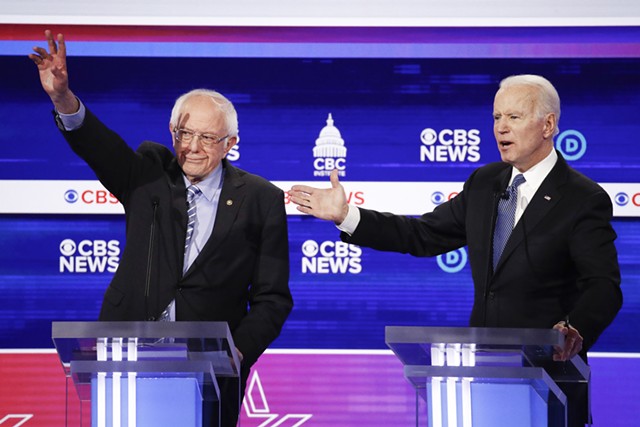 Consider it the frontrunner treatment.

Fresh off a dominant performance at the Nevada caucuses last weekend, Sanders is poised to strengthen his hold on the Democratic nomination this Saturday in South Carolina and next week on Super Tuesday, when 14 states hold elections.

Tuesday night’s debate in Charleston, S.C., was one of the final opportunities for Sanders’ opponents to knock him off course. They did not succeed. Though the senator remained on the defensive for much of the evening, he generally kept his cool and made no unforced errors. That was enough to do the job.

Throughout the two-hour debate, which was hosted by CBS News, moderators allowed candidates to interrupt and shout down one another, leading to a muddled, messy exchange. They rarely asked pointed follow-up questions and frequently changed the subject before drilling too deep.

One theme that emerged from Sanders’ foes was the notion that he would be a risky bet as the Democratic nominee. According to former mayor Pete Buttigieg, that would result in “four more years of Donald Trump, [Republican Minority Leader] Kevin McCarthy as speaker of the House and the inability to get the Senate into Democratic hands.”

Bloomberg piled on, arguing that if Sanders won the nomination, “Bernie will lose to Donald Trump, and Donald Trump and the House and the Senate and some of the statehouses will all go red, and then between gerrymandering and appointing judges for the next 20 or 30 years we’re going to live with this catastrophe.”

“Mayor Bloomberg has a solid and strong and enthusiastic base of support,” Sanders responded. “Problem is, they’re all billionaires.” Citing national polls that show him performing well against the president — particularly in critical Rust Belt states, such as Michigan, Wisconsin and Pennsylvania — Sanders said, “I. Beat. Trump.”

Predictably, moderators and opponents alike questioned Sanders’ past praise for social programs in China, Cuba and Nicaragua — a topic that reemerged this week when "60 Minutes" unearthed old video of him defending the Cuban education system. “Can Americans trust that a democratic socialist president will not give authoritarians a free pass?” Norah O’Donnell asked.

“I have opposed authoritarianism all over the world,” Sanders said, adding that Obama had also praised Cuba for the same reason. Several audience members booed, prompting Sanders to ask, “Really? Really? Literacy programs are bad? What Barack Obama said was they made great progress on education and health care. That was Barack Obama.”

Biden, who served as Obama’s vice president, took umbrage with that characterization. “He, in fact, does not, did not, has never embraced an authoritarian regime and does not now,” Biden said of the former president and then pointed at Sanders. “This man said that, in fact, he thought it was. He did not condemn what they did.”

“That is untrue — categorically untrue,” Sanders responded. “Authoritarianism of any stripe is bad, but that is different than saying that governments occasionally do things that are good.”

Sanders, who rarely admits error, did so on Tuesday when Biden confronted him on his support for a measure that gave immunity to gun manufacturers and retailers in wrongful death lawsuits.

“Imagine if I stood here and said we give immunity to drug companies, we give immunity to tobacco companies,” Biden said. “That has caused carnage on our streets. One hundred fifty million people have been killed since 2007, when Bernie voted to exempt the gun manufacturers from liability.” (A Biden spokesperson later said he meant to say 150,000 people.)

“You know, Joe has voted for terrible trade agreements,” Sanders responded. “Joe voted for the war in Iraq … I have cast thousands of votes, including bad votes. That was a bad vote.”
Prev
Next