The piece of mail Ben Boucher received at his Burlington home looked legit. The envelope even warned, “DO NOT DESTROY” and declared, “OFFICIAL DOCUMENT.”

Yet the “official document” was actually a plea for donations from the Republican National Committee. The form imitated a U.S. Census questionnaire — except for the types of questions it contained and the request for funds at the end.

“Do you approve or disapprove of the Democrats’ never-ending witch hunt to try to destroy President Trump?” one question reads, with “approve,” “disapprove” or “unsure” as possible responses.

The final of 41 questions asks for a credit card number, donation amount and certification that “the answers to the enclosed 2020 Congressional District Census Document are my own.”

Boucher, who described himself as a Democrat who votes “for the person,” did not fill out the form, nor did he donate any money.

“This rots,” he fumed. “As soon as I opened it, I realized it was bogus. I know how important it is to get a full count of the U.S. Census every 10 years. To mimic it in a mailing does tend to make people more cynical.”

He worries that some people might mistake it for a form from the actual Census, the decennial count of American residents that’s set to begin in weeks. That’s a worry shared by Jason Broughton, the Vermont state librarian and chair of the Governor’s Complete Count Committee. Broughton hadn’t heard of the mailer but he reported it to a U.S. Census representative in New York who had.

After viewing the forms, Broughton said he was concerned that the imitation document could affect the Census count, which helps determine where federal funds are directed around the country. If someone received the faux form, would they fill it out unwittingly? Or would that person be skeptical of the next piece of mail labeled “official document"?

At this point, Broughton said, raising awareness about the count is the only way to combat misinformation. The real Census asks just nine questions. Most people fill out forms online.

“The Census does not ask for information that is financial — at all,” Broughton said. “That’s in the form of Social Security numbers, bank information, credit card or where you would want to send a check. One of the big fears is, this could be seen over time as an erosion of public trust and confidence when it comes to what is accurate, good Census information.”

Residents of other states, including California, Montana, New York and Pennsylvania, have also reported receiving the documents. The RNC sent out similar forms in 2010, prompting passage of the federal Prevent Deceptive Census Look Alike Mailings Act that same year. The measure bans organizations from using the word “census” on envelopes, unless they include a disclaimer or return address.

During a U.S. House Committee on Oversight and Reform hearing last week, Rep. Katie Porter (D-Calif.) lambasted Census Bureau director Steven Dillingham over the issue. She held up a copy of the form that one of her constituents received and opined that the 2010 law should have prevented the questionnaire’s release.

“I’m concerned about this, and this mailing has already gone out, so the time to stop it was actually before it happened and when the first reports came into your office,” Porter said.

Last week, Gov. Phil Scott, a Republican, stood beside Broughton and other officials at a press conference that highlighted the importance of getting a full Census count in Vermont. Seven Days later emailed images of the RNC mailer to Ethan Latour, a Scott spokesperson. In a written response to a request for comment, the governor offered “a cautionary note” that “the U.S. Census Bureau survey does not ask respondents for money.”

Asked if the governor condemns that tactic or is concerned by the imitation forms, Latour replied, “We don’t have all the details in this situation and have not done a side-by-side comparison, so we cannot say what the similarities are or intent is.”

Boucher believes the intent was to trick people into giving money to the RNC — while also eroding the trust people have in government.

“All this does is reconfirm what I think of the Republican National Committee,” he said.

Here's what Boucher got in the mail: 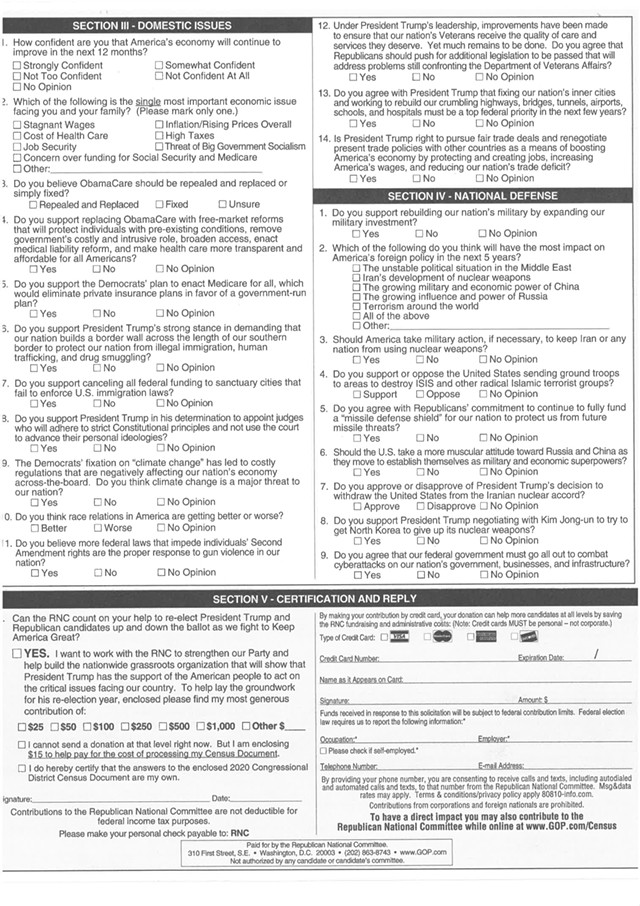