The nonprofit that supports Burlington City Arts has closed on a $2.5 million purchase of 405 Pine Street, a building where the city organization currently offers classes and studio space.

The Burlington City Arts Foundation completed the deal on December 24, according to city records. The purchase was part of a $7 million capital campaign to make the space along the Pine Street corridor a permanent community center for the arts.

The plans call for an expansion of existing studio space for pottery, printmaking, painting and other arts, as well as classes for children and adults. The makeover would also include a large community room and a sculpture garden along Pine Street.

Burlington City Arts plans to keep its downtown location at 135 Church Street next to City Hall and continue to present exhibits, public programs and classes there.

BCA is a city department created nearly 40 years ago during mayor Bernie Sanders' tenure. Taxpayers cover about 40 percent of its budget, and private donations and revenues cover the rest, according to Kraft. The organization pays for its programming at 405 Pine with money from the city's general fund.

BCA plans to request $1 million in public funding from the city council for its 405 Pine capital campaign. The organization hopes to raise most of the rest from private donors, Kraft said.

The Burlington City Arts Foundation secured a $2 million loan for the deal, then transferred ownership to a holding company called the 405 Investment Corporation the same day the purchase closed. The Foundation will fundraise to pay back the loan, Kraft said.

The arrangement evolved as it did partly because BCA needed to act quickly last year when the owner of 405 Pine, Skip Farrell, indicated he wanted to sell the former bottling plant and vending machine warehouse, Kraft said.

"We had to go into overdrive," she said.

For almost 20 years, the city arts organization offered studio space and classes in the city-owned Memorial Auditorium on Main Street. But when the city shut down the aging building in 2016 because of safety concerns, BCA had to find a new home.

That's when it began leasing a 7,100-square-foot space at 405 Pine. Under the new arrangement, BCA will continue to rent the space but from the Burlington City Arts Foundation, Kraft said. 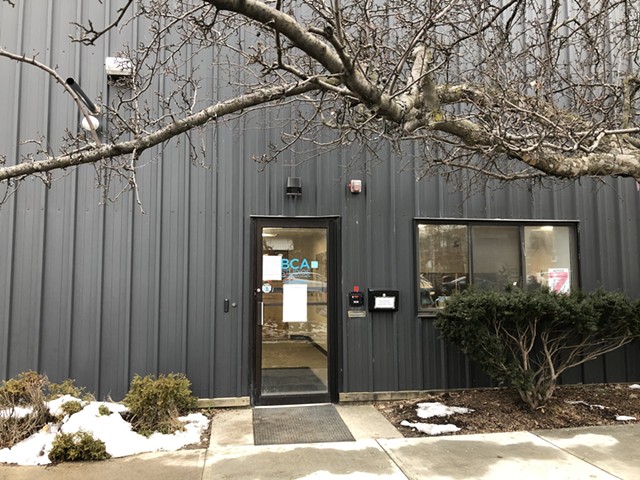 By migrating to Pine Street, BCA has signaled it's given up on waiting for a renovation of Memorial Auditorium. The city has struggled to come up with funds and a viable plan to renovate the large, now-idle structure.

"There's not even a plan out there that they are ready to take to the voters," Kraft said.

Development company Redstone has signed a lease to rent half of the 33,000-square-foot building at 405 Pine Street. The firm has asked the city for a zoning change to use the space for a bowling alley.

"A bowling alley would complement the energy and creativity of the South End while providing an enjoyable outlet for families and workers in the district," Redstone principal Larry Williams wrote to the Burlington Planning Commission.

In his November 6 letter, Williams argued that the bowling alley would help financially support BCA's expansion and also fill an "unmet demand for bowling in the Burlington area" since the closure of Champlain Lanes in Shelburne last year.

The Planning Commission is weighing the request but has not acted.
Prev
Next