Sanders Returns to Iowa for Pre-Caucus Sprint | Off Message 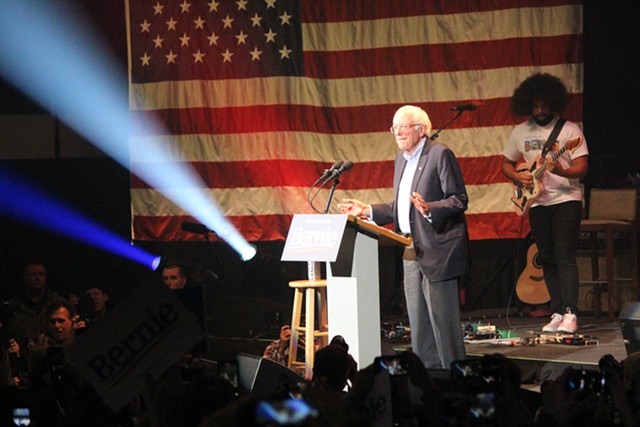 As he crisscrossed Iowa in the final days before the 2016 presidential caucuses, Sen. Bernie Sanders (I-Vt.) had a simple message for his supporters: "On Monday night, if there is a large voter turnout … we win. If there is a low voter turnout, we lose. That's a fact."

That latest assessment came Saturday night as Sanders addressed some 3,000 supporters at a Cedar Rapids arena, flanked by members of the band Vampire Weekend. According to his campaign, it was the largest rally any Democrat has held in Iowa this election season.

The candidate, however, had another record in mind. “Tonight, I am here to ask you to make certain that, on Monday night, we have the highest voter turnout for an Iowa caucus in the history of this state,” he said.

Sanders, who spent most of the past two weeks in Washington, D.C., taking part in the impeachment trial of President Donald Trump, returned to Iowa late Friday night. He spent Saturday making up for lost time, speaking at five events from Des Moines to Cedar Rapids. At Simpson College in Indianola, Sanders made the case that he was the candidate best equipped to defeat Trump in November.

To prove his point, Sanders called on his Iowa state director, Misty Rebik, who was standing nearby. “Misty, are we gonna knock on 500,000 doors in the month of January and the first few days of February?” he asked. “Is that correct?”

“Alright,” Sanders said. “I don’t know how many doors you got in Iowa, but you’ve only got three-plus million people, so that’s a lot of doors.”

Rebik must have gotten right to work because, two stops later, Sanders announced that the campaign had met its goal. Throughout the day, Sanders appeared looser and less gruff than usual — perhaps because he had finally escaped Washington or perhaps because his campaign appeared poised for success. Speaking at a crowded coffee shop in Grinnell, Sanders even made what might qualify as a joke.

“Now there’s a lot of discussion, as you know, about electability — which candidate stands the best chance to defeat Donald Trump,” he said.

“You do!” an audience member responded.

“Now, let’s do a scientific poll,” Sanders said. “All those who think our campaign is the strongest to beat Trump, raise your hand.” 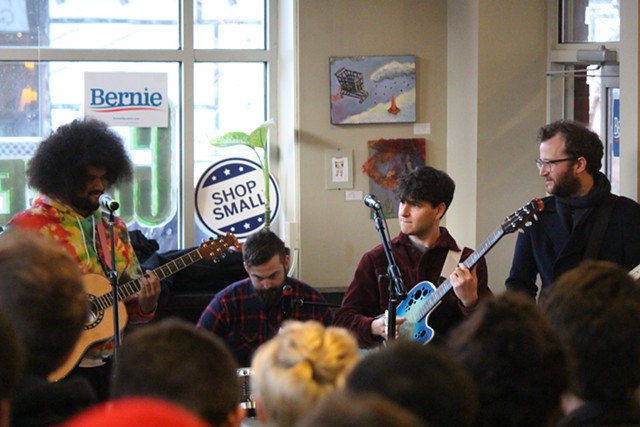 When Sanders arrived at another coffee shop later Saturday afternoon, this time in Iowa City, the members of Vampire Weekend were playing an unannounced acoustic set and taking requests from the audience. Lead singer and guitarist Ezra Koenig made clear before he began that he was no Johnny-come-lately. He noted that, four years earlier, he had played a pre-caucus concert for Sanders in the very same city.

“We didn’t just come back this time because he’s gonna win,” Koenig said.

Vampire Weekend wasn’t Sanders’ only supporting act on Saturday. Throughout the day, Reps. Pramila Jayapal (D-Wash.) and Ilhan Omar (D-Minn.) introduced the candidate before events, as did his wife, Jane O’Meara Sanders. Notably absent from the lineup was Rep. Rashida Tlaib (D-Mich.), who became the subject of considerable controversy the night before when she booed Sanders' 2016 rival, Hillary Clinton, at a Sanders event near Des Moines. At the Iowa City coffee shop, Omar alluded to the fire Sanders and his allies have been facing.

“You can feel it everywhere how well the Bernie Sanders campaign is surging,” she said. “You can sense it by the number of attacks that are pouring in. They are scared. They are terrified of what this means. But I know that we are not fearful about this moment. We are ready. We have been prepared for this moment.”

“I believe we will win!” an audience member yelled. That night at the U.S. Cellular Center in Cedar Rapids, other Sanders surrogates — including filmmaker Michael Moore, Sanders campaign cochair Nina Turner and philosopher and activist Cornel West — also warned of attacks from those who hoped to stop their candidate.

“We want to say to the establishment that the genie is out of the bottle and you can’t put it back,” West said. “Because we on fire.”

It certainly sounded that way as Sanders walked onstage with Vampire Weekend playing and thousands of people cheering.