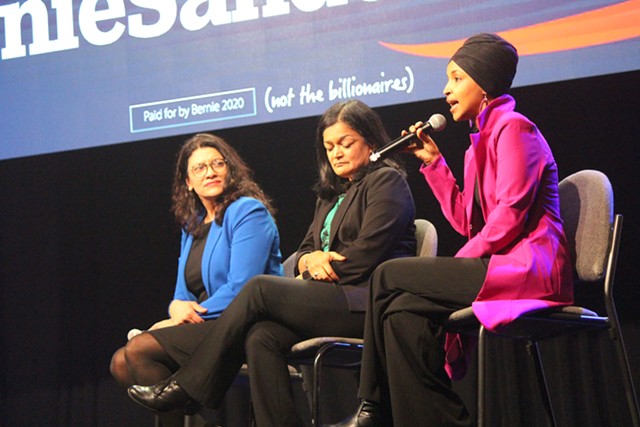 The star of a pre-caucus concert Friday night on the outskirts of Des Moines couldn't make it to the show. Three days before the Iowa caucuses, Sen. Bernie Sanders (I-Vt.) remained stuck in Washington, D.C., for the denouement of the Senate's impeachment trial of President Donald Trump.

Thousands of Sanders supporters still gathered in the city of Clive to hear indie crooner Justin Vernon — the frontman of Bon Iver — and a cast of campaign surrogates make the case for the senator from Vermont. Sanders himself phoned in to the event, his disembodied voice urging audience members to help "create the highest voter turnout in the history of the Iowa caucuses."

"On Monday night, the entire country and, in fact, the entire world will be looking at the great state of Iowa," Sanders said. "And my humble request of you is to do everything that you can to make sure that our friends and our neighbors come out to vote."

Though Sanders framed his campaign as one of unity, two key allies who spoke at the event — Rep. Rashida Tlaib (D-Mich.) and filmmaker Michael Moore — derided his political foes, past and present.

Jayapal, seated to Tlaib's left, grabbed her arm, seemingly in an attempt to quiet her.

"You all know I can't be quiet. No, we're gonna boo," Tlaib said. "That's alright. The haters will shut up on Monday when we win." Earlier in the evening, Moore — best known for the documentaries Bowling for Columbine and Fahrenheit 9/11 — took on the Democratic National Committee and two of Sanders' current opponents.

The DNC on Friday announced that it was lowering the threshold for participation in an upcoming debate in Las Vegas, likely benefiting former New York City mayor Michael Bloomberg. Separately, Politico reported that, in order to keep Sanders from securing the Democratic nomination, some DNC members were agitating to restore the power so-called "superdelegates" play in the nominating process.

Speaking at Friday's rally, Moore said that "corporate Democrats" were rigging the system to support "Mike Bloomberg, the billionaire, the Republican mayor of New York City" because they were afraid Sanders might win. "He can just buy his way onto the debate stage," Moore said. "And I've gotta tell you, I'm so disgusted by this."

Moore noted that some candidates of color had failed to meet the DNC's previous qualifying criteria, and he referred to a recent forum in Iowa as "the all-white debate."

"There are TV cameras here," Moore cautioned. "They're gonna have to start bleeping 5,000 people in here."

Moore didn't leave it at that. He then mocked a recent television advertisement by Joe Biden characterizing the former vice president as a safe choice. "I'm like, what? That's how low the bar is right now? You just have to be safe? You don't have to be on work release? You're not on a list of offenders? You're just safe?"

Then he really dug in the knife.

"I’m here to tell you, Joe Biden, here’s who's not safe: those who voted to send us to invade the nation of Iraq. You did that, Joe Biden. You’re not safe," Moore said. "Every time we have run a Democrat who voted for war — [John] Kerry, Hillary and now Biden — we’ve lost. We lose when we put these Democrats on the ballot in November. I'm tired of losing. Aren't you tired of losing?"
Prev
Next