Vermont Cannabis Bill Heads Back to House Committee for Updates 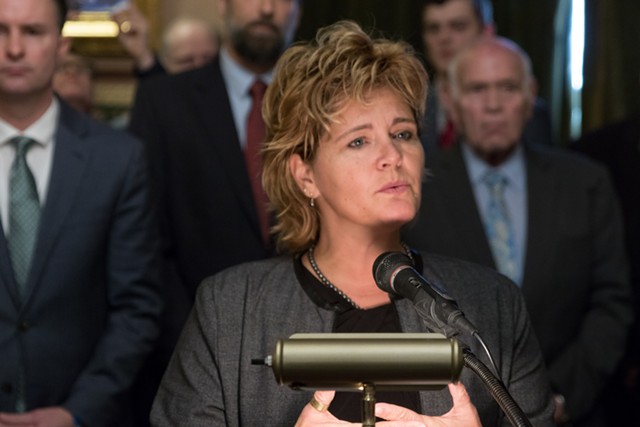 A bill that would legalize the retail sale of cannabis in Vermont is moving backward. After a stint in the House Ways and Means Committee, S.54 is headed — again — to the House Government Operations Committee for another round of edits.

But while the move means the bill will face another committee vote on its long-awaited path to the floor, a key lawmaker says the return-to-sender is actually a positive development.

“It means that we have completed the 360-degree view from every single policy committee who has jurisdiction over a section of this bill, and we have now found a way to incorporate their recommendations,” said Rep. Sarah Copeland Hanzas (D-Bradford), who chairs Gov Ops and has been an avid supporter of S.54. “It strengthens the bill's path forward.”

Copeland Hanzas' committee backed S.54 last session by a 10-1 vote. But the measure stalled in the Ways and Means committee, which received the bill several weeks before adjournment.

House lawmakers were initially optimistic that the bill would move quickly this year given the work done to date. But several policy-focused committees had since asked to weigh in. Those conversations took place in recent weeks, Copeland Hanzas said, noting that her committee helped "shepherd" the talks along to ensure the process did not yield contradictory recommendations.

One change, for example, recommends that cannabis growing operations should not be exempt from land-use regulations, appeasing some concerns about local control.

As Vermont Considers Legalizing Pot Sales, Some Towns Act to Ban Stores
By Colin Flanders
Politics
The full House held a procedural vote Wednesday afternoon to authorize moving the bill back to Gov Ops. Copeland Hanzas said her committee will essentially rewrite the bill to include the changes before sending it back to Ways and Means. She expects to hold a vote before the end of the week.

Rep. Janet Ancel (D-Calais), the Ways and Means chair, said she didn't expect her committee would spend "a lot of time" with the bill as some of its questions would be addressed in the upcoming rewrite. The measure would then head to the House Appropriations Committee before hitting the floor.

If the full House passes the bill, a conference committee composed of House and Senate members would need to hash out the differences in the measures passed by each chamber.

The final hurdle would be Gov. Phil Scott, whose long-standing reluctance to approve a taxed-and-regulated cannabis market has loomed over legalization talks for years.

Earlier this month, though, the governor seemed to signal a willingness to consider the matter when he recommended that tax revenue from any "future" cannabis market be used to create a universal after-school program.

Copeland Hanzas said her committee has worked to find compromises between the Senate's version of the bill and the governor's demands.

"We are still well within those guardrails," she said. "We are on a good path."
Prev
Next