House Committee Says 'Bupe' Bill Will Be a Priority This Session 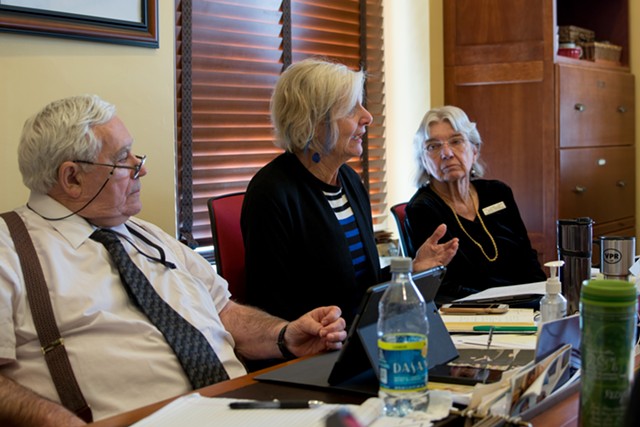 House lawmakers said Wednesday that they will prioritize a bill that would decriminalize possessing the opioid-addiction drug buprenorphine, and former Seven Days writer Kate O'Neill testified in support of the measure.

The bill, H.162, stalled in the House Committee on Human Services last session, partly because of concerns about the amount people would be legally allowed to possess. An amendment would cap that at the equivalent of 30 days' worth. That seems to have assuaged concerns sufficiently for lawmakers to say they are committed to working on the bill ahead of the all-important crossover deadline, when the House and Senate trade bills.

"This is on our agenda to move," said Rep. Ann Pugh (D-South Burlington) the committee's chair, after the hearing.

Lawmakers took further testimony on the bill, rehashing many of the same arguments for and against it that were laid out last session. They did, however, hear one new perspective — from O’Neill, who spent a year writing "Hooked," a series about the opioid crisis in Vermont, following the death of her sister.

O’Neill, who lives in Philadelphia, testified by telephone. She said Vermont has been a leader in its approach to treating those suffering from opioid-use disorder. But pointing to barriers like transportation and stigma, she said it is a “fallacy” to believe that all Vermonters can easily access treatment, especially those in rural areas.

She wrote as much in her series, particularly in a story called "Between a 'Hub' and a Hard Place: Three Stories of Opioid Addiction in Rural Vermont."

"From Enosburgh to Wilmington," she wrote, "addiction is both flourishing in isolation and creating it: in rural towns where it's easier to get drugs than to get treatment; in the judgment of communities that don't understand that addiction is a disease."

Decriminalizing bupe would not only protect people who need the drug, but also their family members, she told the committee.

“People who could never in a million years imagine illegally buying a medication [choose to] because they worry without it, their son or daughter could relapse after a period of sobriety,” she said.

O’Neill added that her own understanding of the opioid crisis shifted during her yearlong reporting project, which ended in December, leaving her with some regrets about what she wished she had done to save her sister, Madelyn Linsenmeir. She warned lawmakers to not make the same mistake.

“Don’t let this bill be one of your regrets,” she said.

Public policies in Vermont have been gradually shifting in recent years to address the opioid crisis as a health concern rather than a law enforcement issue. In 2018, Chittenden County's top prosecutor announced that her office would no longer prosecute people for possession of black-market buprenorphine, noting that formulations of the drug "are intended to be life-saving."

Burlington officials have since credited the policy change, along with other strategies, with helping to halve the county's opioid deaths — bucking a statewide trend. But possession of "bupe," as it is often called, an opioid addiction medication, remains illegal without a prescription.

Human Services vice chair Sandy Haas (P-Rochester) introduced an amendment Wednesday that would cap the amount at roughly a month's supply. Haas said she views the bill as another "tool in the toolkit" to address the state's opioid crisis.

“We have moved as a state into a clear recognition that harm reduction is something to talk about,” said Haas. “We have also moved as a state, and as a committee, to the concept that opioid-use disorder is a disease. [So] then the question is, as policy makers, what do we do about that?”

Several lawmakers said that cap made them more comfortable with the bill.