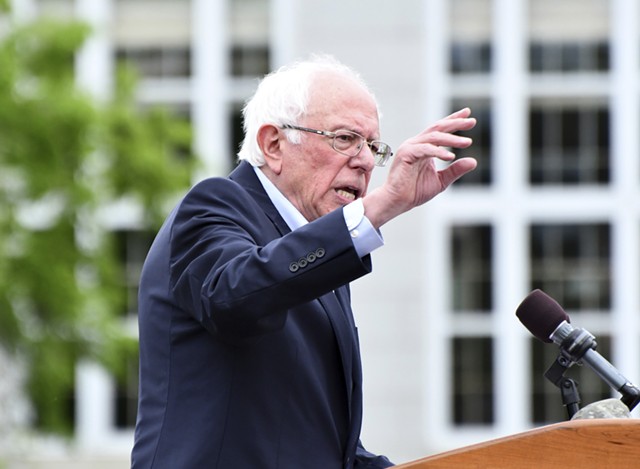 With just two weeks remaining before the Iowa caucuses, Sen. Bernie Sanders (I-Vt.) has been trying to stay focused on a major vulnerability of a top rival: former vice president Joe Biden's past willingness to pare back Social Security.

But events — some within his campaign's control and some outside of it — have conspired to change the conversation.

First, there was a dustup over a private conversation between Sanders and Sen. Elizabeth Warren (D-Mass.), a longtime friend and current opponent for the Democratic presidential nomination. Then, there was an overreach by Sanders' campaign, when it took out of context a 2018 video of Biden discussing his views on Social Security.

Then, on Monday, Sanders found himself apologizing to Biden for an op-ed penned by Vermont native, Fordham Law School professor and Sanders surrogate Zephyr Teachout, in which she wrote that the former VP had "a big corruption problem" because he's gone to bat for major donors. "It is absolutely not my view that Joe is corrupt in any way," Sanders told CBS News. "And I'm sorry that that op-ed appeared."

Finally, on Tuesday, the senator from Vermont found himself on the receiving end of another round of fire from 2016 rival Hillary Clinton. According to the Hollywood Reporter, Clinton attacked Sanders' record in a documentary set to be released by Hulu.

"He was in Congress for years. He had one senator support him," Clinton says in the documentary. "Nobody likes him, nobody wants to work with him, he got nothing done. He was a career politician. It's all just baloney and I feel so bad that people got sucked into it."

Asked by the Reporter whether she would endorse Sanders if he won the nomination, Clinton said she was "not going to go there yet" and proceeded to accuse his staff and supporters of sexism.

Sanders himself has sought to keep the conversation focused squarely on a policy disagreement that separates him from Biden, who holds a slight lead in Iowa.

"We're not going to make personal attacks on Joe Biden, but I think the record shows that Joe's history in the Senate and my history in Congress are very different," Sanders told CBS News on Sunday in New Hampshire. "I think it is important to know where a senator has come from and where his head is at. And Joe's record on [Social Security] is a little different than mine."

Indeed, though the Sanders campaign took the 2018 video out of context, Biden has repeatedly made the case over the years that Social Security and other entitlements must be scaled back in order to restrain federal spending. That's a sharp contrast with Sanders' staunch support for the popular programs.

“I think anyone who looks at the vice president’s record understands that time after time after time, Joe has talked about the need to cut Social Security,” Sanders told the Washington Post on Sunday. “I don’t think that that is disputable.”

What is in dispute is whether Sanders can keep the conversation focused on their differences when it matters most.
Prev
Next