VPIRG to Support Candidates Who Will Fight Climate Crisis | Off Message

VPIRG to Support Candidates Who Will Fight Climate Crisis 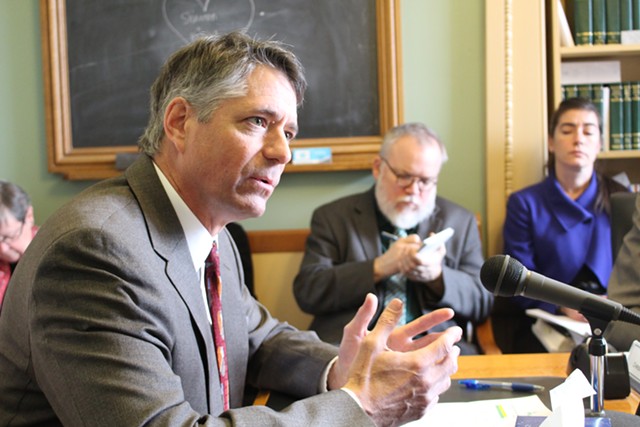 Vermont’s largest environmental advocacy organization announced plans to begin directly backing candidates for state office for the first time, a major shift from its past position of political neutrality.

The Vermont Public Interest Research Group announced Saturday that it would form a separate nonprofit entity called VPIRG Votes to back candidates who share its members' concerns about the climate crisis.

“We’re getting off the sidelines,” VPIRG executive director Paul Burns said Monday in an interview with Seven Days. “The board just felt that we were no longer doing the best service for our members by voluntarily sitting out the [electoral] process.”

That’s a departure for a nonprofit organization founded in 1972 that has limited itself to lobbying lawmakers on consumer and environmental issues important to its 50,000 members, such as reducing water pollution, shifting to renewable energy and encouraging open government.

But a growing concern that climate change is becoming an existential threat convinced the group’s board that it needed to take a more direct role in influencing elections, Burns said.

“We face an unprecedented climate crisis,” Ashley Orgain, chair of VPIRG’s board, says in the group’s launch video. “To protect our economy, our environment and future generations, we need to make changes.”

The video shows a map of the Northeast and says Vermont’s greenhouse gas emissions rose by 13 percent since 1990 while those of its neighbors have all declined. That trend has to change, but “many of our career politicians have shown they simply aren’t up to this challenge,” Kate Lapp, government reform associate for VPIRG, says in the video.

The group’s large canvassing operation has excelled at educating voters about issues important to members. It issues “scorecards” rating individual politicians on their environmental track records.

Canvassers have been “self-censoring” by not telling voters which candidates they should support. “Somebody would ask us, ‘Do you think I should vote for this person?’” Burns said. “And we had to assiduously avoid answering that question.”

VPIRG itself is has a 501(c)4 nonprofit federal tax status. But VPIRG Votes will be an IRS 527 organization, with more flexibility to engage in political activities, Burns said.

VPIRG staffers may work for both organizations, but the finances will remain separate, Burns said. The goal is not to cannibalize existing VPIRG fundraising sources but to find new ones.

The new organization will not accept donations from corporations, in keeping with VPIRG’s belief that they should not have an outsized influence on public policy.

Vermont is one of the few states capable of showing true leadership on climate, but so far it has failed to do so, Burns said. The goal is to change that.

“We’re hopeful that this year will be different, but we’re not willing to go on hope anymore,” he said.

Correction, January 21, 2020: This post has been updated to correct VPIRG's tax-exempt classification, and to further clarify remarks from Burns about corporate donations.
Prev
Next