Two Bills in the Vermont House Would Boost Legislators' Pay 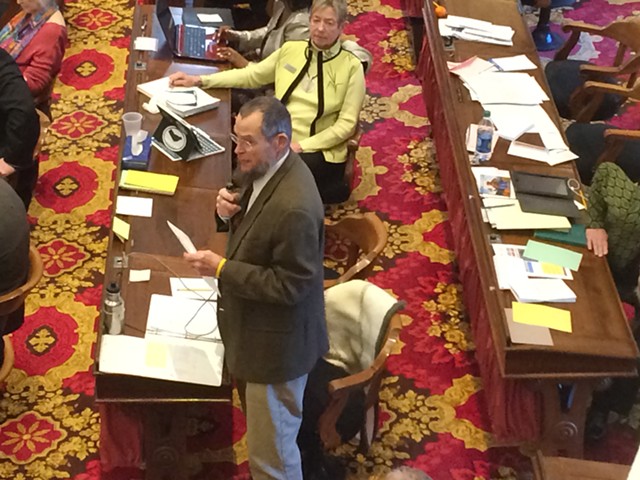 Rep. Jim McCullough (D-Williston) last week floated a bill to increase the pay of committee chairs and leaders of both the House and Senate by 20 percent. “Leadership has much greater responsibilities than the rank and file,” McCullough said. “That means more work.”

His bill, H.614, calls for bumps for the speaker of the House and the president of the Senate, both of whom already make more than their colleagues.

Regular members of the House and Senate earn $743 for each week of the legislative session. The typical session is 18 weeks, which results in annual pay around $13,372. They get annual pay raises tied to inflation rates.
House Speaker Mitzi Johnson (D-South Hero) and Senate President Pro Tempore Tim Ashe (D/P-Chittenden) receive extra pay of $12,715 outside of the session, for a total annual salary of $26,087 each.

The bill would result in a $5,217 raise for their positions. The figures do not include additional per diem payments to legislators for housing, food and mileage.

The chairs of the 18 House and 14 Senate committees would also receive a 20 percent increase — $2,674 — under McCullough’s bill.

McCullough, the owner of Catamount Outdoor Family Center in Williston, knows some legislators may find it hard to support his bill because of the optics.

“Multiple legislatures have tried to get a pay raise,” he said. “They’re always nervous about doing it because, you know, you’re voting yourself a pay raise and things are tough all over in Vermont.”

Committee chairs talk to advocates and administration officials about legislation, and they must work more than their colleagues, McCullough said.

“To speak to the old adage, anything worth doing is worth paying for, and Vermont needs to know that committee chairs and leadership really put in a lot of additional effort over the rank and file,” said McCullough. He has served in the legislature for 17 years and sits on the House Committee on Natural Resources, Fish and Wildlife. He is not a committee chair.

McCullough said he hasn't discussed his bill with House leadership.

Rogers, 24, is one of the youngest members of the legislature. She works in a small sawmill in Fletcher and is concerned that not enough working Vermonters can afford to serve in the legislature. The intent of the bill, she said, is to make it financially viable for a "wider spectrum of people" to do so.

Rogers' bill, which did not yet have a number, would pay legislators a fifth of their weekly salary — $149 — when the body is not in session. That equates to roughly $5,000 annually, or an annual 37 percent salary hike.

Rogers said she spends about one day a week on legislative issues when the House is not in session. That pay would help legislators pay monthly bills, she said. Several young representatives have told her they strongly support the change.

“They’ve been coming up to me saying this would make a big difference for them,” Rogers said.

Plenty of bills go nowhere, and McCullough acknowledged his might be one of those.

"I expect it will not be high on the agenda," McCullough said.
Prev
Next