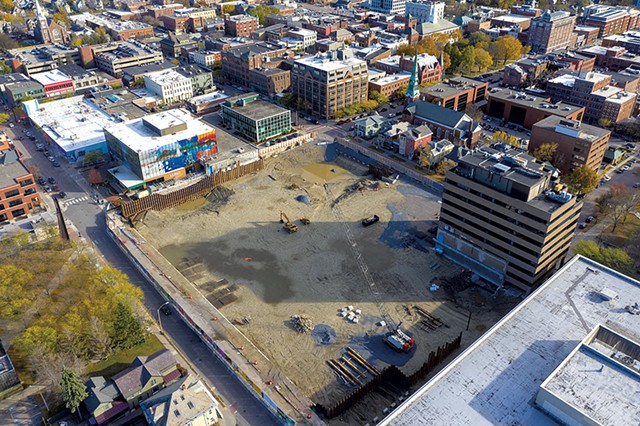 The CityPlace Burlington developers have countersued a group of opponents of the long-stalled downtown project.

BTC Mall Associates and Devonwood Investors argue in a December 30 court filing that the opponents — Barbara McGrew, Lynn Martin, Michael Long and Steve Goodkind, along with their attorney, John Franco — violated a prior settlement in an ongoing lawsuit involving the project.

As a result, the developers say, they incurred "substantial costs" and are asking a judge to award them attorney fees. They also want the court to nullify a provision in the settlement that the developers donate $500,000 to a charitable fund.

Franco said he's disappointed in the turn of events, particularly since he had cheered CityPlace progress in recent months. Developers presented a scaled-down version of the downtown project in October 2019, at which time Franco said he was optimistic that the lawsuit could be resolved. Any goodwill he felt has now evaporated.

CityPlace Burlington 2.0: Questions Remain About Scaled-Down Proposal
By Courtney Lamdin
Development
"Lynn, Steve, Barb and Michael are all retirees on Social Security — that’s who Brookfield, a multibillion-dollar company, has sued," Franco said, referring to Brookfield Asset Management, BTC's majority owner. "You have a bit of an idea of what that does to the atmosphere of this case."

The counterclaim stems from a June 2017 settlement that required the developer to include more parking spaces in the project design, to not lease housing to college students and to contribute $500,000 to a charitable fund, among other agreements.

Construction to Begin After Sides Settle Burlington Town Center Legal Disputes
By Katie Jickling
Off Message
The developers argue that Franco and his clients violated that settlement by continuing to pursue a separate public records claim. The Vermont Supreme Court ruled in the developer's favor on that claim in September 2018.

The counterclaim says the opponents' litigation "constitutes a breach of the implied covenant of good faith and fair dealing" and "interfered with BTC's ability to perform its obligations under the Settlement Agreement."

As such, the developers argue, they should not have to make the charitable donation. A message seeking comment left for Jonathan Rose, a Burlington attorney representing the developers, was not immediately returned.

Franco called the counterclaim "frivolous" and plans to file a response by month's end.

Brookfield is scheduled to appear before the city's development review board in February to discuss its latest proposal. But Jeff Glassberg, who is working as a liaison between the developers and the city, wants more from the developer. He says Brookfield has reneged on an earlier promise to schedule community meetings about the project.

"Despite weekly requests for an update on that, we've seen no progress," he told the Burlington City Council on Monday.

The recent developments leave a sour taste in Franco's mouth.

"[I was] really supportive of the scaled-down project," he said. "This is a serious kick in the shins."

Read the filing below: