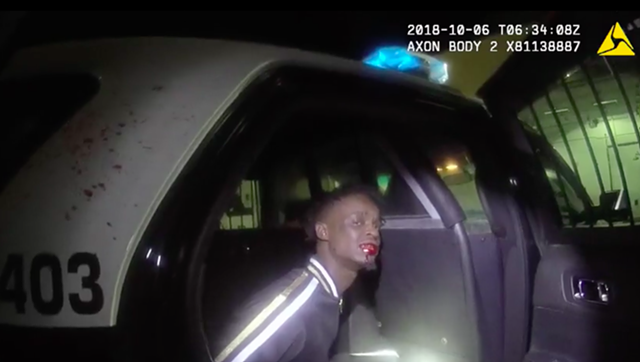 A man who fled Burlington police in 2018 has sued the department, claiming officers injured him during the subsequent arrest.

Mohamed Luhizo is the third black man to file suit against the department for separate incidents that happened in the fall of 2018. All three plaintiffs are represented by attorney Evan Chadwick.

Luhizo's civil complaint, filed Wednesday in U.S. District Court, alleges officers used excessive force while taking him into custody early on October 6, 2018. It further contends that the Burlington Police Department has engaged in a pattern of using unlawful force against people of color.

Congolese Brothers Say a Run-In With Burlington Police Left a Lasting Impression
By Derek Brouwer
Crime
Anticipating "legal interest" in the case, Burlington police publicly released some body camera video from the incident on December 31, noting that the city's citizen police commission had previously reviewed the officers' actions and determined they were "within guidelines."

Deputy Chief Jon Murad said in an interview Wednesday that the videos evidenced "good police work" by officers who were responding to a crime in progress by men with known felony records for violent offenses.

The incident took place around 2:30 a.m. on October 6, 2018, when six officers approached a group of men along Main Street that included Luhizo, then 21, and his 23-year-old brother, Luhizo Luhizo. Police said the officers were attempting to break up a fight — which the civil complaint referred to as "roughhousing" among friends.  "As the sergeant and another officer attempted to handcuff Luhizo Luhizo, Mohamed Luhizo shoved both of them as they were attempting to handcuff his brother," the police department wrote in its press release. "Luhizo Luhizo kicked the sergeant in the chest and chin, injuring him. Mohamed Luhizo then attempted to flee the scene on foot."

Several officers chased Mohamed until he slowed down near a curb. At that point, the officer nearest him collided with Mohamed and they fell to the ground.

Shortly thereafter, a second officer arrived and helped pin Mohamed on his stomach. That's when a third cop, Derek Hodges, arrived and "dropped his knee onto Mohamed's face with significant force," breaking his jaw, the lawsuit alleges. In the three videos reviewed by Seven Days, Mohamed can be heard expressing pain as soon as Hodges kneeled down.

Chadwick told Seven Days that the officers' initial involvement was warranted but that Mohamed was already in custody by the time Hodges injured his client.

"There is absolutely no justification for that," he said.

Burlington Cop Reprimanded for Profanity That Set Off Violent Altercation
By Derek Brouwer
Off Message
The lawsuit says that the Chittenden County State's Attorney's Office ultimately dropped the charges against Mohamed. But while his case was pending, Mohamed racked up unrelated offenses and ultimately pleaded guilty to charges of lewd and lascivious conduct, driving under the influence and providing false information to a police officer. He spent a total of 180 days in jail and is currently on probation, according to police.
His brother, Luhizo Luhizo, served a 30 to 60 day jail sentence after pleading guilty to disorderly conduct, according to Burlington police.

Murad said the department reviewed the incident after receiving notice that a judge had rejected a civil suit in state court. Chadwick said Mohamed had tried to file a suit while behind bars, but he didn't have an attorney's help and did not properly serve the defendants.
On Wednesday, Chadwick provided Seven Days with additional bodycam footage captured by Hodges. The attorney opined that the police department should have included the video its December 31 release.

The new footage shows the initial altercation and includes additional audio of the pursuit. As Hodges begins pursing Mohamed, he can be heard yelling "get that motherfucker!" When he later kneels down, his knee is not visible in the frame.

Murad said the department released the angles that "gave the most complete picture" of the interaction.

Activists Demand Burlington Fire Cops Involved in Violent Incidents
By Courtney Lamdin
Off Message
Several of the responding officers in the Luhizo incident have been involved in other recent high-profile cases involving force. The month prior, Sgt. Jason Bellavance, a shift supervisor, shoved an unsuspecting black man into a wall, knocking him unconscious.

Bellavance was later suspended for his actions in that incident, though not until after the Luhizo chase. The man who was pushed and his brothers are currently suing Burlington police for excessive force; they're also represented by Chadwick.

Another officer who responded to the Luhizo incident, Cory Campbell, was reprimanded last week for using profanity during a 2019 interaction with a man outside of the University of Vermont Medical Center. A fistfight ensued, and 54-year-old Douglas Kilburn died days later.