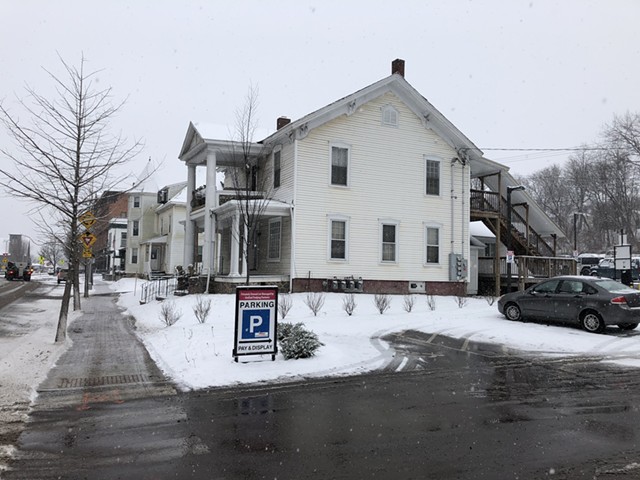 Development firm Redstone has applied for a zoning permit to build a 120-room, five-story hotel on East Allen Street in downtown Winooski.

To make way for the project, the developers have proposed demolishing two residential structures, including one at 41 East Allen that is listed on the Vermont State Register of Historic Places as a locally significant structure. The home was built in 1872 and is known for the two lions that sit on either side of its front steps.

Tear-downs are an increasingly familiar scenario in the city, where an uptick in development on major streets has come with multiple demolitions.

The hotel would be developed by Winooski Block LLC, according to the zoning application. The LLC is headed by Redstone CEO Larry Williams; managing partner Erik Hoekstra is listed as the LLC's registered agent, state records show. Neither responded to messages from Seven Days.

The Winooski Development Review Board will consider the proposal at its regular meeting Thursday night.

Redstone's hotel project could compete with another proposal a few blocks away at a city-owned lot along Abenaki Way. Last month, the Winooski City Council voted to enter into negotiations with Nedde Real Estate and partners for a development on that lot, which would include a 100-room boutique hotel, a 300-car parking garage and 36,000 square feet of office space.

Redstone's project would incorporate an existing surface parking lot, along with the land under the two houses that would be demolished. Those homes are currently rentals that contain approximately 10 units total.

The hotel would include 65 parking spots at the existing parking lot. The developer is asking the city for permission to meet requirements for another 43 spaces in the nearby city-owned parking garage on Cascade Way. 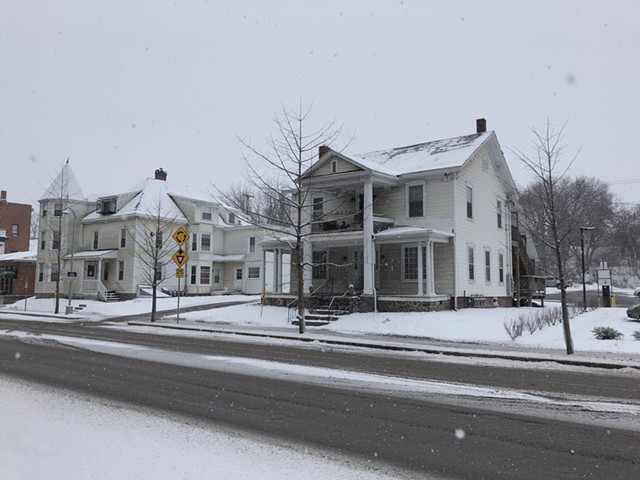 Winooski officials have sought to attract a hotel in the downtown core for more than a decade, with various projects that have surfaced and then stalled. With two projects now proposed, is there a market for both?

Heather Carrington, Winooski's community and economic development officer, said the city is willing to work with any developer who brings a project forward.

It's up to the developer to determine "what the market will bear," Carrington said Tuesday.

It's unclear if the proposed demolition of a state-listed historic structure will slow the project. The house at 41 East Allen is sheathed in rusting aluminum siding, but with its tall white columns and curving porch, it still has fans who believe it has potential for reuse and renovation.

Winooski Historical Society member Sarah van Ryckevorsel expressed concern that it could be on its way out.

"The house with its two lions is an iconic welcome as you enter the downtown of Winooski," van Ryckevorsel wrote in an email to Seven Days. "Of course I would love to see the house stay standing with a creative architectural solution to incorporate the old building into the new one, similar to what is being done with the old YMCA building in Burlington."

She was referring to plans to turn the former Greater Burlington YMCA building into a hotel that would retain the building's historic front.

Fight to Save One of Winooski's Oldest Homes Goes Another Round
By Molly Walsh
Off Message
Meanwhile, opponents of a proposed apartment building that would raze one of the oldest houses in Winooski, known as the Mansion House, have appealed that project on multiple grounds.

The appeal is currently at Vermont Superior Court.
Prev
Next