The former Burlington police chief resigned Monday after revelations last week that he used an anonymous Twitter account to mock a critic, then lied about it repeatedly during an interview in July with Seven Days.

During discovery in the cases, the plaintiffs' attorneys asked del Pozo a series of questions about his social media accounts, including which accounts he’d used and whether he had deleted any.

In an October 30 response, in which del Pozo "swore to the truth of the information," the chief did not disclose the since-deleted @WinkleWatchers Twitter account he used in July and wrote that none of the accounts he used have been deleted, according to court documents made public Monday. 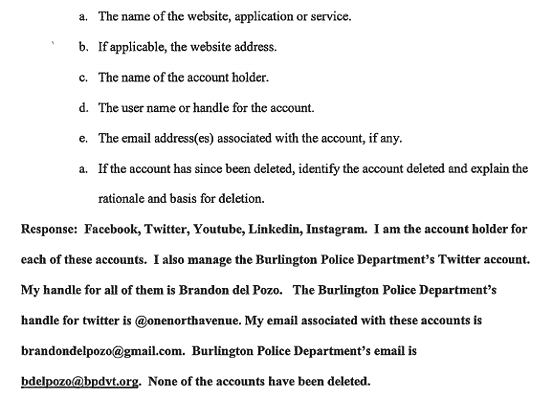 The former chief was also asked to list all legal actions, including any “administrative proceeding,” to which he was a party.

Del Pozo was initially placed on administrative leave in late July after telling Mayor Miro Weinberger about his anonymous Twitter account and his subsequent denial to a Seven Days reporter. The investigation resulted in a medical leave that began August 1. He returned to his post September 16. City officials never publicly disclosed the preceding administrative investigation until last week.

Burlington Police Chief Resigns After Twitter Trolling Scandal
By Courtney Lamdin
Off Message
Del Pozo’s discovery responses, filed October 30 and November 6, did not mention it, either.

Attorneys for the men, Evan Chadwick and Robb Spensley, asked the judge in both cases Monday to issue a default judgment in favor of their clients based on what they characterized as the city’s false answers given during discovery.

“It is a fraud perpetrated on the Court when a chief law enforcement officer, with a masters degree in criminal justice and with assistance from counsel, including the City of Burlington legal department, knowingly provides false answers under oath to legitimate discovery questions,” they wrote.

Congolese Brothers Say a Run-In With Burlington Police Left a Lasting Impression
By Derek Brouwer
Crime
They also asked the court to impose punitive damages against the city of $50,000 in each case.

City Attorney Eileen Blackwood initially said Monday that she did not review del Pozo’s filings, only those submitted by the city itself. The city is represented in the cases by outside counsel Lynn, Lynn, Blackman & Manitsky, P.C. The firm did not immediately respond to a request for comment.

Blackwood later clarified in an email to Seven Days that an assistant city attorney did help prepare the response. That attorney was unaware of del Pozo's Twitter "account issue."

Wright, who has been named acting chief, did not immediately return phone messages for comment.

At a press conference Monday announcing the chief’s resignation, Weinberger said questions over del Pozo’s credibility in future legal matters was part of the conversation between the pair Sunday night.

View the full motion for sanctions below:

Correction, 3:23 p.m.: This story has been updated to correct a comment from Burlington City Attorney Eileen Blackwood regarding who reviewed del Pozo's written responses in the lawsuits.
Prev
Next