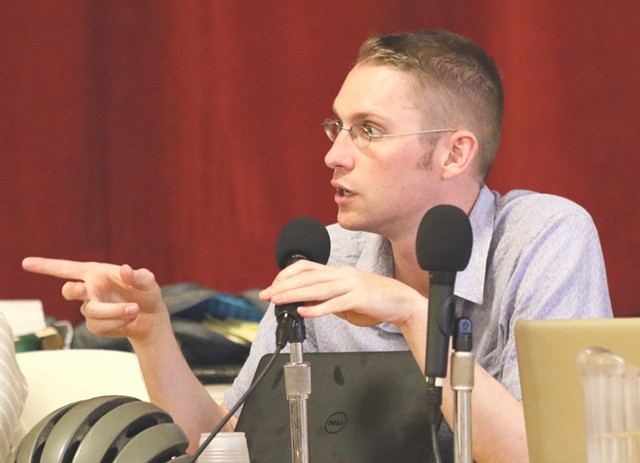 An effort to bring ranked-choice voting back to Burlington has missed a key deadline, all but ensuring the issue won’t be on the March ballot.

Citing a scheduling conflict at the end of Monday's Charter Change Committee meeting, City Councilor Joan Shannon (D-South District) moved to adjourn before the three-member panel could take up the measure. Councilor Franklin Paulino (D-North District) supported the motion, while Councilor Max Tracy (P-Ward 2), the committee chair, did not.

“It’s just frustrating that we weren’t even able to start the conversation,” Tracy said, adding, "I was willing to stay and continue the conversation. I was hoping we’d be able to get something out, but that did not happen."

The full council needs to consider all charter changes for the Town Meeting Day 2020 ballot by December 16. Without another committee meeting before then, the ranked-choice voting proposal will likely miss the deadline, Tracy said. He hopes to get the item on the November ballot instead.

On Monday, the committee met for more than 90 minutes and did vote to send three charter change items to the full council. The first would allow noncitizens to vote in local elections. Another would add a Winooski representative — and an additional Burlington resident — to the city’s Airport Commission. A third would allow local questions to be printed on a state general election ballot.

A group of Progressive councilors only introduced the ranked-choice voting proposal earlier this month. Burlington used ranked-choice voting, also known as instant runoff voting, from 2005 to 2010. Voters rank candidates in order of preference, and if their first choice is eliminated, their vote is reassigned to their second choice. The process continues until one candidate earns 50 percent or more of the vote. The current voting system only requires a 40 percent majority to win.

The city council voted 9-3 on December 2 to send the measure to the charter change subcommittee for review. Shannon was one of the three no votes. At that meeting, she told her colleagues that she supports ranked-choice but felt the charter committee would need more time to study it or “other election methods.” Constituents had told her that ranked choice was too complicated, Shannon said then.

Ranked-Choice Voting Proposal Advances in Burlington
By Courtney Lamdin
Off Message
On Tuesday, Shannon said that she told everyone about the hard-stop time when the meeting was scheduled last week. She and Paulino had plans to join Democratic lawmakers at an event on Monday night “that was planned way in advance,” Shannon said.

Regardless, according to Paulino, the committee needed much more time to fully vet the ranked-choice voting proposal. Shannon agreed.

“My intention wasn’t to limit discussion but rather to expand it," she said, adding, "When you get into something, oftentimes you find out it’s a little more complicated than you thought."

Ranked-Choice Voting Proposal Advances in Burlington
By Courtney Lamdin
Off Message
“They’re denying people from hearing where they stand on this issue. It’s a cop-out,” Hanson said. “It’s disrespectful to all the folks who really care about this issue and who took the time out of their busy lives to engage on this.”

But Shannon said that Hanson could have introduced the concept months ago. "He could have put this on our agenda in June. His lack of planning should not become our emergency," she said.

Hanson hopes the committee revives the discussion at its next meeting.

"I really hope they don't continue to delay on this," he said. "I hope they genuinely take up the issue and make a decision."
Prev
Next