CityPlace Burlington to Be Fully Built by 2023, New Docs Show | Off Message

CityPlace Burlington to Be Fully Built by 2023, New Docs Show 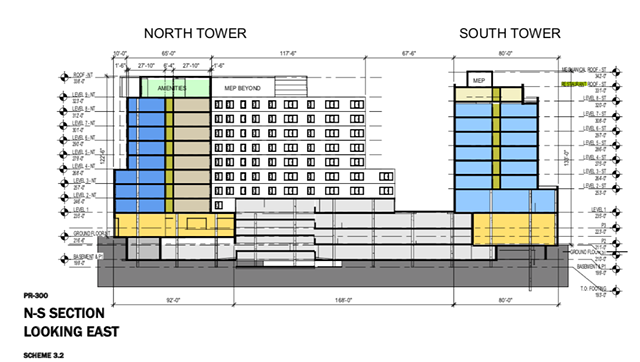 Once completed in 2023, CityPlace Burlington will boast 318 apartments, a rooftop restaurant, a 174-room hotel and more than 530 parking spaces.

Construction on the much-delayed project will begin in August 2020 and is expected to wrap up 30 months later.

That’s according to new documents that project majority owner Brookfield Asset Management filed with the city late last week. The Burlington City Council’s Board of Finance reviewed them at its meeting Monday night and voted to allow the city to submit a “substantial change request” to the state body that oversees the tax-increment financing program.

The memos provide the first glimpse into the new design since Brookfield unveiled its scaled-down proposal nearly a month ago. The 14-story towers in the original design, which spurred lawsuits and financial challenges, were replaced by 10-story buildings.

The submitted designs don't include plans for the former Macy's building, which was not part of the original project but is now envisioned as the future home of the University of Vermont Medical Center offices.

CityPlace Burlington Developers Unveil Scaled-Down Proposal
By Courtney Lamdin
Off Message
The memos reveal that construction costs are greatly reduced now that the project has morphed from 1 million square feet to just over 730,000. When bidding on the original project ended in May, the costs came in at $190 million. The developer attempted to reduce the price tag “but ultimately determined there were not enough savings to justify starting construction,” according to a project memo.

In July, Brookfield announced that the “scope, scale, and the timing” of construction would change.

The scaled-down design uses lighter-weight steel and is now projected to cost $120 million to build, according to the documents. It should be complete by February 2023 barring any regulatory delays or legal challenges, according to Jeff Glassberg, a liaison between city and the developers.

Assistant city attorney Richard Haesler confirmed that the new project will fall slightly short of its anticipated TIF revenues. In 2016, Burlington voters approved a $21.8 million TIF bond to fix up sidewalks and rebuild streets lost to the former Burlington Town Center mall decades ago. Such debt is meant to be repaid with additional tax revenue, known as “increment,” generated by the new project.

Glassberg wrote in a memo that TIF funds from the project will pay for the reopening of Pine and St. Paul streets and "streetscape upgrades" to parts of Cherry and Bank streets that abut the project. But early estimates show the new design will only generate $19 million in increment, Glassberg said Monday. 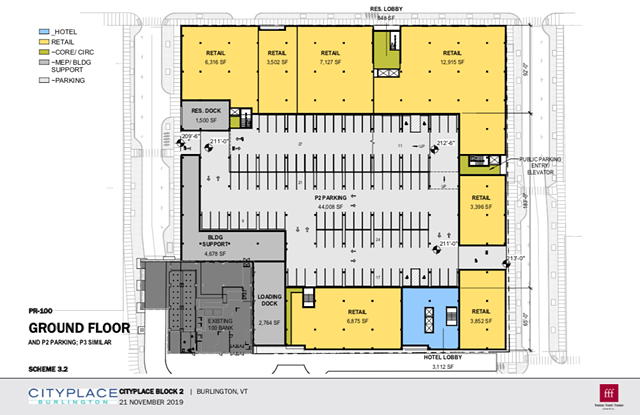 Mayor Miro Weinberger said the TIF shortfall may be closed by other projects in the city’s Waterfront TIF district, such as the former Macy’s building and the existing mall building that fronts Church Street. That building will remain intact as part of the redevelopment.

“We haven't reached the point where we’re concluding that $19 million is where the new budget is going to be,” the mayor said.

The city will discuss the project changes on December 19 with the Vermont Economic Progress Council, which oversees the TIF program.

The memos also outline the project’s phasing and amenities. New schematics for the hotel’s southern tower show seven retail spaces on the ground level, topped off with a rooftop restaurant, community space and observation deck.

The residential tower on the north side of the site will feature 121 studios, 142 one-bedrooms and 55 two-bedroom units. The designs don’t specify the rental rates, but Brookfield has committed to making 20 percent of them “affordable” as required by Burlington's inclusionary zoning ordinance.

Brookfield also anticipates having to undergo state permitting under Act 250 because of the hotel concept. The developers say a hotel “is responsive to market demand and can contribute to the continued dynamism of downtown Burlington.”

After many delays, Glassberg said the recent updates from Brookfield show significant progress.

“The stuff they delivered to us ... is the kind of stuff we've been looking for forever,” he said. “I thought it was great news.”

Correction, November 25, 2019: A previous version of this story misstated the number of parking spaces in the project proposal.
Prev
Next