Burlington Warns Campers to Stay Away From Site at City Hall 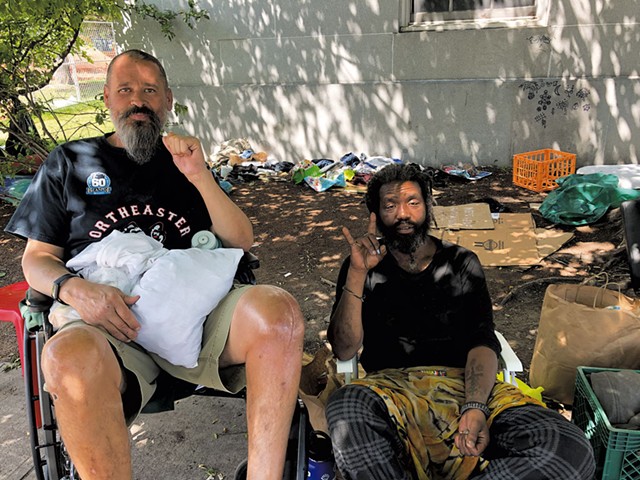 The people who formed a mini-encampment next to Burlington City Hall appear to have moved on, and not just because snow arrived this week.

An official city notice hanging against the building's south wall warns that "no camping is permitted at this location at any time."

Posted November 1, the notice says that any belongings found on the site after 8 a.m. November 4 would be removed.

"If you do not stop camping or if you return to camp at this spot after it is cleaned up the city may pursue legal action against you," the notice added.

Burlington City Attorney Eileen Blackwood said the advisory was posted after someone used the code enforcement website SeeClickFix to report blankets, a lawn chair and trash in the bushes next to city hall.

Related Mayor: The Encampment by Burlington City Hall to Be Off-Limits

Mayor: The Encampment by Burlington City Hall to Be Off-Limits
By Molly Walsh
True 802
In an email, Blackwood said that "individuals known to be homeless had been gathering in that area earlier in the fall but the items had been left unattended."

Because no one picked up the stuff, it was put in storage, Blackwood said. If the items are not retrieved by December 5, the city will toss them or give them away to a nonprofit. Blackwood said that, to her knowledge, no one was cited for camping illegally at the spot. Burlington Mayor Miro Weinberger declined to comment.

The encampment formed in July after the renovation of City Hall Park began, displacing homeless people who were accustomed to spending much of their day there.

Some told Seven Days they felt they were being evicted by an unnecessary project in the park. They vowed to stay at the spot next to the south door of city hall in protest.

Complaints about trash and fights at the spot followed. In August, the city expanded the construction fencing around the park, displacing the mini-encampment but not by much. Several members of the group simply moved their chairs and blankets a dozen feet to the side. They continued to spend much of the day there through the fall — at least, until the sign went up.
Prev
Next