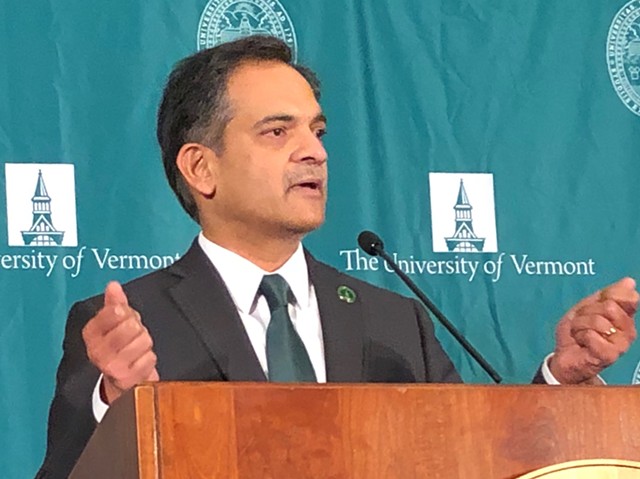 University of Vermont President Suresh Garimella announced Thursday morning that the school is freezing tuition at current levels for next year.

The move will hold true for undergraduate and graduate students, and for both Vermonters and students from out of state, in a budget that he will present to trustees, he announced.

Undergraduate tuition costs $16,392 for Vermonters and $41,280 for others, according to UVM's Student Financial Services. Room and board, books and other expenses bring that to about $35,220 for Vermont students and $60,468 for those from out of state.

Funding a college education is one of the largest expenditures families face in the United States, Garimella said, and too many families “are getting squeezed.”

“This is why today I am announcing that I will present to the board of trustees a zero tuition increase for next year,” Garimella said.

He called it an historic decision, and noted that the timing of the announcement comes as many high school seniors are filling out college applications. He urged them to “think about the amazing institution UVM is.”

Freezing tuition would mean a loss of roughly $8 million next year — the estimated amount UVM would have taken in with a 3 percent tuition increase.

Garimella said he’ll work for “greater efficiencies” but would not make up for lost revenue on “the backs of our employees.” Instead he would try and grow revenue in a number of ways.

He pledged to boost UVM’s student retention rate, recruit more transfer students and expand enrollment in summer, graduate and online programs. He also said the school would work hard to get philanthropic support, including from private industry.

In 2017, when Tom Sullivan was president, the university touted that trustees had approved the lowest tuition increase in 40 years, a bump of 2.7 percent for in-state tuition and 2.5 percent for out-of-state tuition.

Throughout the Northeast, the college-age demographic is shrinking. That's led to declining enrollment at other schools and prompted several in Vermont to shut down. UVM has maintained relatively robust enrollment, but could be feeling pressure to make its price tag more attractive.

At the same time, the university has been on a building spree in recent years with a $104 million STEM complex and a $95 million makeover of the athletic complex on campus.

Survival of the Smartest: Vermont's Colleges Must Adapt as Pool of Potential Students Declines
By Molly Walsh
Education
UVM students greeted the news of the freeze with cautious enthusiasm.

“It sounds good to me,” said Kerry Brosnan, a 20-year-old junior from Westbury, N.Y. She worries about her growing student debt and UVM’s high tuition. “It’s definitely frustrating every year when I see the bill going up and up.”

UVM should make up for the lost revenue by trimming administrator salaries — not student programs, she suggested. “Take money from those people because they are making way too much compared to the professors who are teaching us,” Brosnan said.

Ted O’Mara also likes the idea — although it comes a bit too late for him. “I’m unfortunately graduating, but it seems pretty nice,” said the 22-year-old senior from Kinnelon, N.J.

He knows firsthand how expensive UVM is. “I’m looking at $600 a month for eight years or s. … I’m going to be pretty crippled by my debt.” But, he added, the experience has been worth it. “I’m glad I’m here,” O’Mara said. His suggestion for trims: Hold back on expensive renovations and building projects but don’t cut professors.

“We know there is tremendous value for our kids in earning a college degree or pursuing trades training and technical education,” Scott said in a written state. “These are opportunities that we want all kids to be able to access and afford.”

Purdue University, where Garimella worked before he took the top job at UVM, has not raised tuition since 2012 and has announced it will do the same next year — making for an eight-year freeze.

Asked about the freeze at the Indiana school, Garimella acknowledged that he has experience with the concept but suggested UVM’s heavy reliance on out-of-state tuition and relatively low state funding make it a somewhat different situation.

In response to various questions about how all the numbers would add up, Garimella expressed confidence and noted that he’s an engineer, adding: “I’m pretty good at math.”
Prev
Next