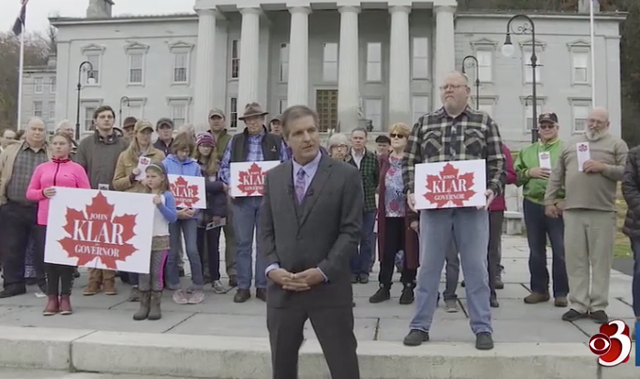 A Republican lawyer and farmer from Brookfield who announced Monday he will challenge Phil Scott for governor next year immediately came under fire for his positions on abortion and transgender people.

John Klar, 56, outlined at a press event in Montpelier and in an interview with Seven Days a brand of fiscal conservatism that he says is exactly what the state needs to stave off financial ruin.

High taxes are driving businesses and people from the state at the same time pension debt is soaring, meaning that if the economy sputters, the state could find itself in real trouble, he asserted.

“If that happens, we’re looking at bankruptcy,” Klar said. “If we don’t fix this, the state is going to have its credit rating downgraded again.”

But it was his views on social issues, not fiscal ones, that earned the former pastor swift condemnation from the political establishment.

Klar, who has never held public office, is opposed to abortion. He referred to it in an interview as “extermination” of babies, then quickly revised  that to "termination." He said his “compromise” position was to call for a state ban on third-trimester abortions, which he likened to “infanticide.”

He also published an op-ed last month titled “Transgender surgery is the lobotomy of the 21st century” on the website American Thinker. He stood by the piece in an interview.

The Vermont Democratic Party denounced his “archaic stances” and further called his positions evidence of the “growing decay within the Vermont Republican Party.”

“Mr. Klar and his divisive, close-minded, and downright disgusting rhetoric has no place in our public discourse,” party spokesperson R. Christopher Di Mezzo said in a statement. “His voice is not one to be celebrated, rather, his place in our politics should be scrutinized from every angle.”

Vermont Republican Party chair Deb Billado could not be reached for comment.

Klar said that he mentioned nothing about transgender issues at his press conference, and instead focused on gun rights, economic development, keeping schools open and tackling teacher pension debt.

The fact that Democrats went after him for something that isn’t core to his platform shows that they’re not able to address the issues he’s raising directly, he said.

“I like that they’re going after what they see as my weak points, because they can’t handle my strong points,” Klar said.

Klar does seem to have a taste for incendiary political rhetoric. During his rally in Montpelier he argued the state government had "grown like a bloated tick off the blood of working Vermonters."

Scott doesn’t seem too worried about a primary challenge from the little-known candidate, at least not yet.

“The Governor is only 11 months into his term, and he remains solely focused on achieving real results to improve the lives of Vermonters, grow the economy, make Vermont more affordable and protect the most vulnerable,” his spokesperson Rebecca Kelley said.

The Republican primary is not until next summer, which gives Klar time to improve his name recognition and profile in the state.

Despite criticism that Scott reneged on campaign pledges to protect gun rights, Scott made quick work of his last primary challenger. In August of 2018, he defeated Keith Stern, grocer from North Springfield, by a two-to-one margin.