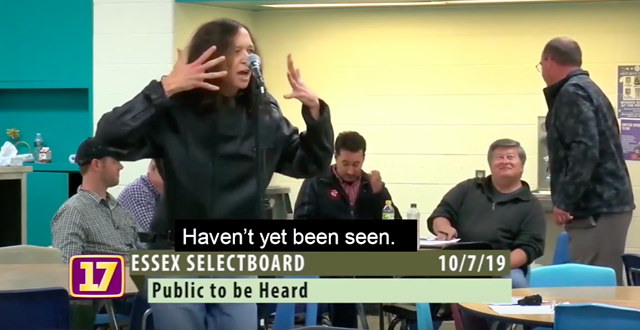 In 2016, the former Essex Selectboard member handed condoms to primary election voters outside of the polls — on the middle school campus — with the message, “Stop STDs (Special Tax Districts): Vote NO December 13!” And she’s vociferously voiced her displeasure with various plans to merge Essex Junction governmental departments with the greater town of Essex.

But Wrenner, who lost reelection in March after 12 years on the board, took it to another level earlier this month when she belted out an Essex-relevant rendition of Jethro Tull’s “Locomotive Breath” at a selectboard meeting. With an instrumental version of the song playing in the background, Wrenner, clad in a leather jacket and jeans, danced as she wailed her own lyrics into the microphone.

“Oh this merger train is speeding, towards Election Daaaaayyy,” she sang when it was her turn to speak during public comment. “Only voters can stop it, with a vote of nay! That’s the way to slow this merger train down.”

Meeting minutes earnestly describe Wrenner's performance: "Her rendition mentioned the municipality’s history, process, surveys, and feedback provided about the proposed merger," the document reads. "She sang about her hopes that the process slows down and focus on what is most important."

So what inspired the October 7 show? Wrenner said in an interview that she’s sick of handing out flyers, circulating petitions or simply speaking at public meetings. And, she said, why spend months knocking on doors to inform voters when she could sum up the issue in a rockin’ rendition of a flute-filled prog rock jam?

“The song just came to me,” Wrenner said. “I was talking about it with a friend who said, ‘We’ve got to stop this merger train,' and I just thought, My gosh, ‘Locomotive Breath'! It’s kind of natural for me to put different words to that tune. The attitude of that song sort of perfectly fits my frustration.”

Talk of a merger is nothing new in Essex, Vermont’s second-largest town, with some 22,000 residents. About half, though, live in Essex Junction, a village within the town that has its own library and fire, recreation and planning departments. A merger, which requires a charter change, has tax implications and would shatter a sense of identity for some who feel strongly about the delineated place where they live.

Residents first weighed in on a wholesale merger some 60 years ago and in 2006, when denizens approved the proposal. But a group petitioned for a revote, which was held in 2007, and residents voted it down.

After several surveys and other work, the municipality is preparing for another vote, in November 2020. The selectboard hopes to outline a plan that the residents can discuss at Town Meeting Day, according to Wrenner. She thinks things are moving too quickly for such a momentous decision — hence, slowing down the merger train.

Ahead of her gig, Wrenner said she took a voice lesson, hoping to tweak her "choir-boy" singing style. Though no one would mistake her for Jethro Tull frontman Ian Anderson, Wrenner nailed the cadence and tempo and belted out the words with gusto.

“Down at 81 Main Streeeeeet, there’s another merger date” she sang, to the amusement of some audience members captured on video. “A plan comes out of the archives, from 1958. It’s the same old costly tax shift, from the Village to their friends in the town, who just keep watching their property tax ascend — oh, how this government spends!”

Wrenner admitted that her 2016 stunt — which she referred to as her “condom caper” — hurt her reelection bid earlier this year. But the loss has been a “freeing thing,” she said.

“Now I have more time and energy to do what I enjoy most,” she said. “To connect with issues of fairness and transparency by using my creativity.”

Watch the full performance below. A friend of Wrenner's tweaked the original Channel 17 video so that the backing music is easier to hear and the lyrics are displayed: