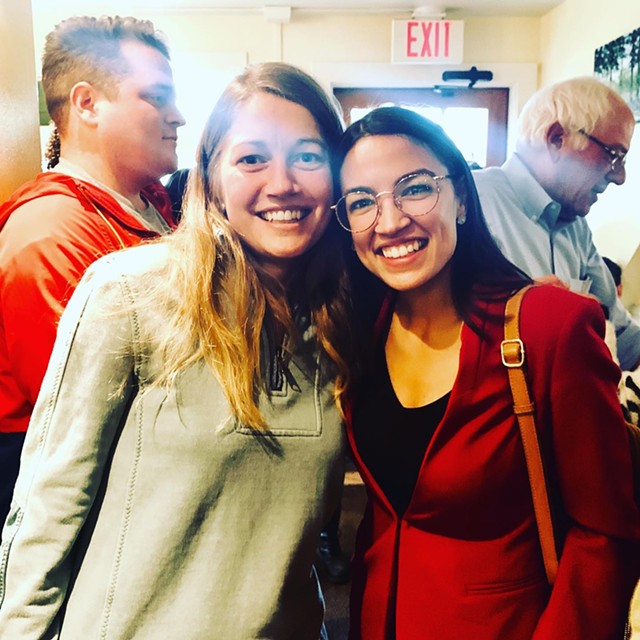 It's not uncommon to bump into Burlington's favorite son, Sen. Bernie Sanders (I-Vt.), strolling down Church Street or grocery shopping at Hannaford. But it's not every day that the presidential candidate is spotted brunching in the Queen City with an even bigger liberal superstar.

According to owner and chef Charles Reeves, who was working in the kitchen that morning, Sanders is a semi-regular and "usually gets the buckwheat pancakes with blueberries." Ocasio-Cortez ordered scrambled eggs with rye toast and home fries, Reeves reported.

"They're totally regular people when they eat," he said of Sanders and O'Meara Sanders. "And we don't make a big deal about it."

What was up for discussion Saturday morning was less clear. Sanders' campaign did not respond to a request for comment and Seven Days could not reach an Ocasio-Cortez spokesperson, though her office confirmed the meeting to CNN.

Ocasio-Cortez is widely seen as one of the most influential liberal politicians in the country — and her endorsement would be a big get in the Democratic presidential primary. Before she unseated a veteran member of Congress in 2018, she volunteered for Sanders' 2016 campaign. She has also worked with and praised Sen. Elizabeth Warren (D-Mass.), another presidential contender.

"What I would like to see in a presidential candidate is one that has a coherent worldview and logic from which all these policy proposals are coming forward," Ocasio-Cortez told CNN in May. "I think Sen. Sanders has that. I also think Sen. Warren has that." "It was an incredible surprise to run into someone who has inspired so many women and girls to engage in public service," she said of Ocasio-Cortez. "I hope that Vermont will have an opportunity to invite her back soon."
Prev
Next